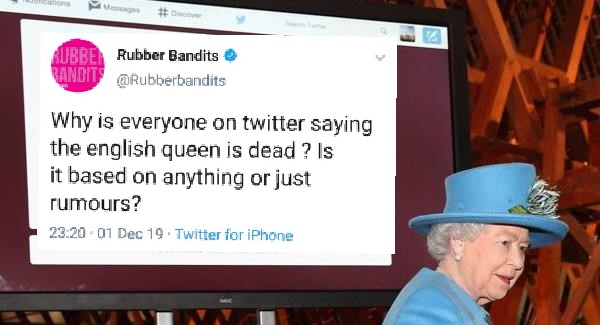 Tonight you may have noticed that The Queen is trending on Twitter. Every couple of months, David Attenborough trends on Twitter and I have a minor heart attack myself. It’s usually a new documentary or something but there’s always that brief moment I fear the worst.

Tonight, when I saw “The Queen” trending, my first thought was the royal Netflix series, The Crown, but this trend really is about the Queen. But is there any truth to it? Is the Queen really dead? Most likely not. Here’s what we know.

Where have rumours of the Queen’s death come from?

Ok, so first of all you’re probably wondering why Goosed.ie is writing about this at all. Simply, this is a fascinating insight into social media, fake news and how to construct the perfect lie to go viral. It may also be true but I’m assuming it’s not.

Talk of the Queen’s demise has been sparked by a screenshot from a WhatsApp group. Honestly, there’s not much more to it.

In this group, Gibbo has forwarded a message he’s apparently received from a member of the Queen’s guard. They’ve all been informed to ready themselves for the duties that come with a Royal funeral.

But is there any truth to it?

I need to start this with a caveat which explains this could very well be the truth and we’ll only find out tomorrow if it is. But here’s my opinion as to why it’s not true.

To start, this is just a screenshot from a WhatsApp group. It could be anyone. The lads nicknames might not lend much to their credibility but the fact the group’s icon is a penis certainly kills off the last bit of trust I’m going to afford these lads.

Also, I’ve had a quick look online and couldn’t find any record of news of the Queen Mother’s death being suppressed, though admittedly I’m writing and researching this on the fly on my mobile.

Regardless, for me it seems a perfect construct. There’s the apparent credibility of who this third party source is. There’s a gap to finding out the truth – tomorrow at 9.30am. There’s apparently more credibility added by the knowledge of procedures upon the Queen’s death.

However, I look at all of this and see the perfect bit of fake news. In fact, the process of what happens next it’s fairly public knowledge. It’s called “Operation London Bridge” and it outlines what everyone will do when Queen Elizabeth dies.

Now, I could be totally wrong but should this all transpire to be fake news, this screenshot should be studied. It’s got everything to make a story go viral.

Update: The rumours are not true

According to a well-informed Royal insider, this is all nonsense and should be ignored. I’m going to go with this because he seems more reliable than Gibbo.

I see we have reached that time of year where I have to dispel rumours of HM’s passing.

The Queen is not dead. She is alive & well and is very much looking forward to hosting President Trump and other world leaders at Buckingham Palace on Tuesday for the NATO reception.