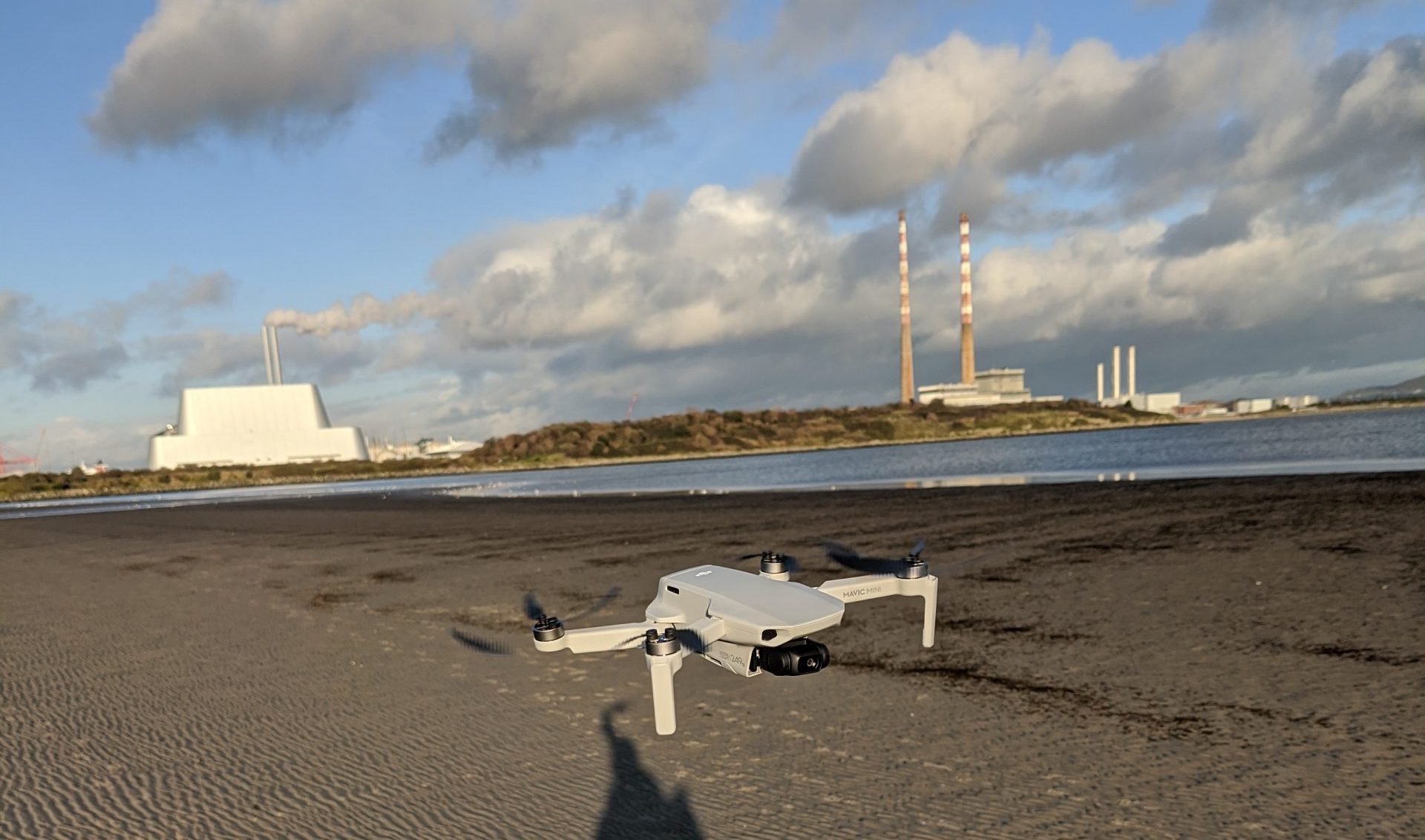 These two things went nice and hand in hand because of the new DJI Mavic Mini being very fairly priced. Wintery weather took a brief break last week and quick as a flash, I was out in Sandymount to take my maiden flight with my shiny new drone. 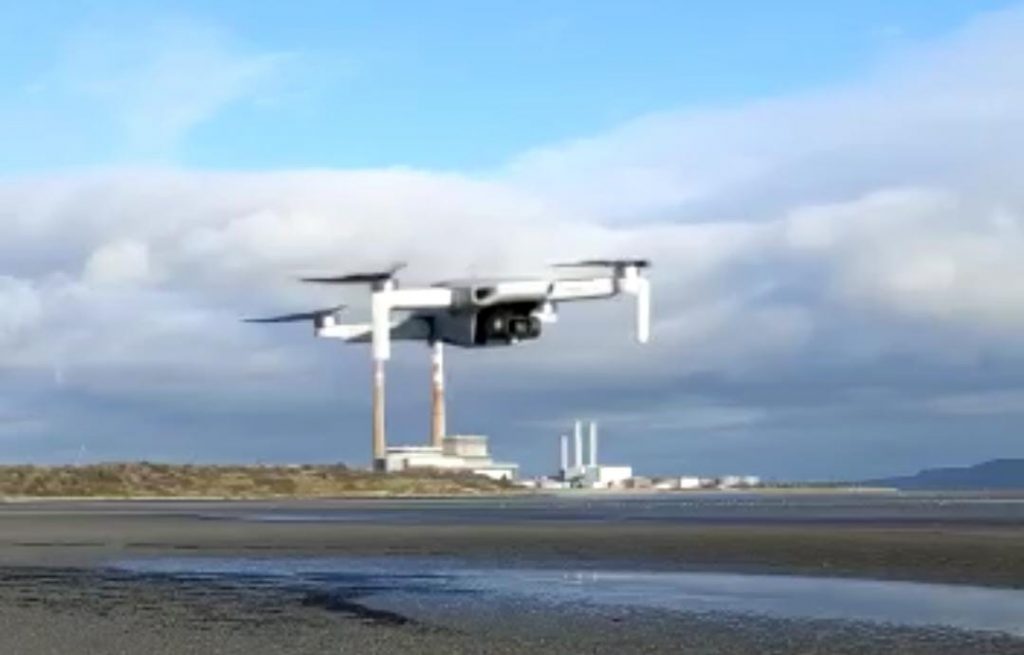 The DJI Mavic Mini is a remarkable piece of kit. Weighing in a 249 grams, the Mavic Mini is a deliberately light drone with the U.S. market firmly in its sights. The giveaway here is that drones from 250 grams and up must be registered in The States. Ireland is in a bit more of a grey area when it comes to drones given that EU directives are forthcoming which should align with the U.S. 250 gram rule. However, if you want to fly above 15 meters in Ireland, you’ll need to register your Mavic Mini with the Irish Aviation Authority.

Now, that little detail aside, let’s start looking at what you really need to know about having fun with the Mavic Mini.

I thought to buy a quality DJI drone for just €400 was going to be a few years away, but here we are. DJI has kept some features locked away for their higher-spec drones, but the Mavic Mini doesn’t disappoint anywhere. Starting off, the price is a winner. There are two options with a base model setting you back €399 and the Fly More Combo costing €499. The latter is a no brainer if you can stretch I beg you to do so. You’ll get extra batteries and props that you’ll almost certainly need down the line. The extra batteries alone turn one trip out flying from being a 30-minute burst to an hour and a half expedition.

For the record, you’ll be able to fly over 500 meters into the sky with a theoretical range of 4 kilometres. I wasn’t going to be testing any of these numbers during my first flight but after seeing some other pilots on YouTube, that 4 kilometres is very ambitious. Regardless, Irish laws dictate that you shouldn’t be flying that far anyway.

It’s so damn easy to fly

I’m not going to lie. I was a little nervous taking flight for the first time. I was out in Sandymount with the amazing Poolbeg stacks in the background. The tide was out and I had the whole beach to myself, more or less. Still, I was a little scared to actually kick the drone off. I downloaded a checklist app to run through making sure everything was good to go and off my little Mavic Mini went.

To start, the drone hovers at about 1.5 meters above the ground while the controller, with your smartphone as a screen, started to bring me through basic flight training.

A few minutes later and the app finished up informing me I was good to go on my own. Straight away, there was a childishness that overcame me. I wanted to go higher and faster, all the time being a little too anxious to fly out over the water. So there’s my first tip. Have your first flight over solid ground and give yourself loads of space.

Don’t let the tiny size of this drone deceive you. 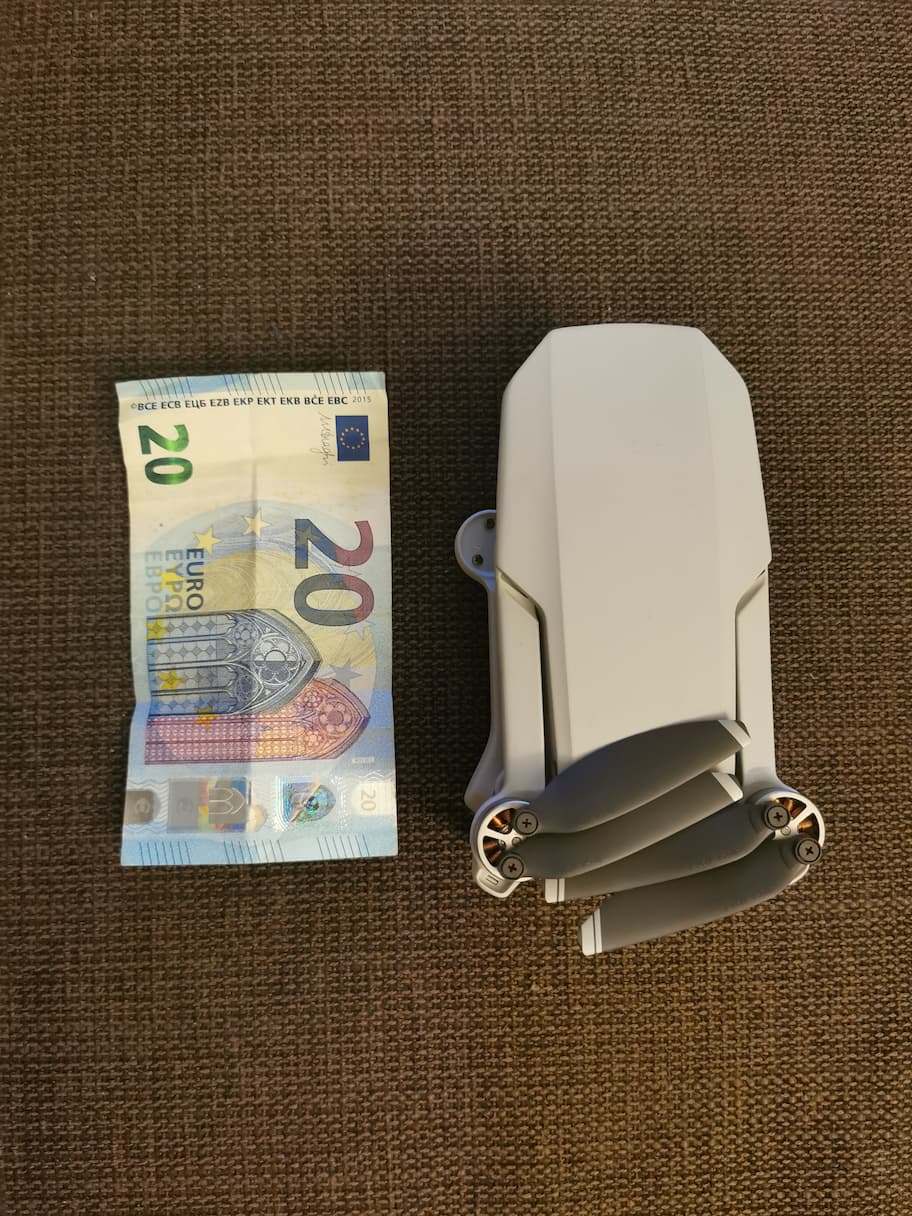 The last point about the Mavic Mini being remarkably easy to fly largely comes down to the amount of tech that’s built-in. When you start your flight, the app updates your home point. That means if your battery starts to die in the drone or you lose contact, it can still fly back to where your flight started.

Of all the tech built-in, DJI excels in the video side of things.

Without being able to shoot video, your drone would be pretty useless. The Mavic Mini has a gimble built-in offering incredibly stable shots even in windy conditions. While 4K video is reserved for high-end models, the Mavic Mini’s 2k shooting doesn’t disappoint at all. Actually, rather than going on about it, here’s the footage I shot during my first hour or so flying my Mavic Mini.

This is cut together from one run on the beach with my three batteries. I was trying to recharge my first dead battery with a power bank but it just wasn’t fast enough, unfortunately.

Beyond stable shots that look great, the Mavic Mini also has Quick Shot modes built-in. Shots like the “dronie” will fly backwards into the sky while keeping you as the focus. “Rocket” mode is similar where the drone goes straight up rapidly while “circle” keeps the focus on you while spinning around you.

Limitations of the DJI Mavic Mini

As much as I enjoyed the Mavic Mini, there are some limitations from the get-go. First of all, it’s not IP-rated, so if you feel rain you’re going to need to land and get your drone covered as soon as possible.

If it’s windy, you’ll get windy warnings. Due to the weight of the drone, I was getting strong wind warnings once I hit 20 meters. You can fly through it, but I just didn’t have the confidence on my first flight. Also, here’s a great tip that I happened to pick up from YouTube before I took to the skies. Pay attention to the mode your drone is in. Position focuses on GPS steadiness, cinematic focuses on smooth video while sport is all about speed and power. I found my drone struggling to get back through the wind during my flight while in cinematic mode. I popped it into the sport and it whizzed back without further struggle.

Is DJI Care worth it?

DJI also offers an insurance programme for the Mavic Mini. I think it cost me €35 to cover the Mavic Mini and that means if it smashes into a wall or crashes in water, I’ll get my Mavic Mini repaired or replaced for a small fee. It’s important to point out that you can only avail of this if you still have your broken drone so you’ll still need to be wary over water.

The other thing to remember is that if you want DJI Care you can only get it 48 hours after activating your drone for the first time.

Short and sweet is this review. For me, that’s very deliberate. I’ve said all there is to say. The DJI Mavic Mini isn’t just a great drone for beginners, but it’s a great drone in general. I has so much fun on my first flight without any previous experience or anyone there to hold my hand that I can hand on heart recommend this to anyone and everyone into photography, flying or gadgets in general.

One catch is that this is looking like the must-have Christmas present of 2019. When I say “this” I mean the Fly More combo too. I picked up mine in Harvey Norman and even though the shop was crazy busy I got some great service so head on over to your local Harvey Norman and get flying. I know I normally shout about Amazon.co.uk but DJI regulate the prices of these drones pretty heavily so this is one of those times you should try shop local when you can.