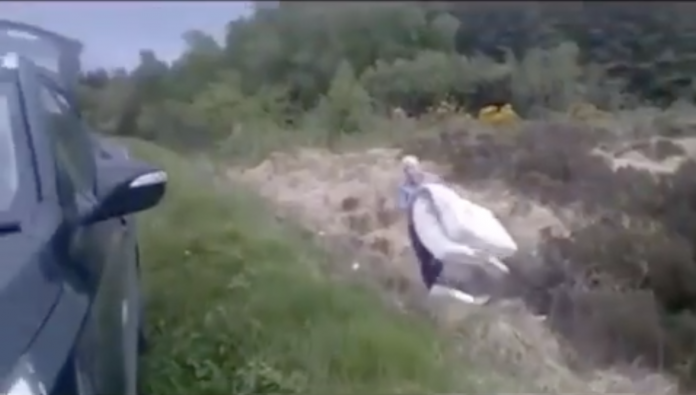 I’m not going to lie. I thoroughly enjoyed typing that title. It’s one of those incredibly Irish moments, isn’t it? One of those moments where you forget about Brexit. You forget about Trump, and you just sit back and appreciate the fact we’re living on a wee island that can avoid all the shite. We come from the land that churns out poets like Yeats, Heaney, Beckett, Boland and Montague. Now we can add red van man to the list.

Why is “Sorry Me Hole” Trending?

The red van guy recorded his put down of Mr. One-Five-Two and it’s absolutely glorious. The full, uncensored, video has appeared on Twitter. Now, if you’re sensitive to bad language, someone being caught rotten and, I better mention, the dropping of “c-bombs”, this isn’t the video for you.

For some, this video is important because it’ll shift some merchandise. Hairy Baby t-shirts certainly didn’t miss a trick.

For me, it’s the fact stereotypes are being smashed makes this bigger. It’s the culchie with a van berating a softspoken gentle-looking man about the environment. The result is a video which is hilarious but also raising awareness about how we are all responsible for looking after our planet.

Today, I live in Dublin but I’m from a small parish called Clara. Not the one that’s a twenty-minute drive from Mr One-Five-Two in Offaly, but instead the one in Kilkenny. I like to go for a walk when I’m home and there’s often trash being thrown in dykes and ditches. It’s shocking that so many people think it’s acceptable to put down their window and throw out their bag of McDonalds or similar.

This is called flytipping and it’s a very serious problem in rural Ireland. In recent years, there have been more and more recycling centers opening with very fair prices to get rid of things like matresses. Still, people thing it’s better to dump their garbage out the countryside. Videos like this can unite the country in understanding this simply isn’t acceptable.

Now, to end on a lighter note, one of my favourite bits is where the guy in the red van puts down the dumper by saying “driving around in your 152”. Is that not just the most Irish way to call someone out? The year of their car. Brilliant.