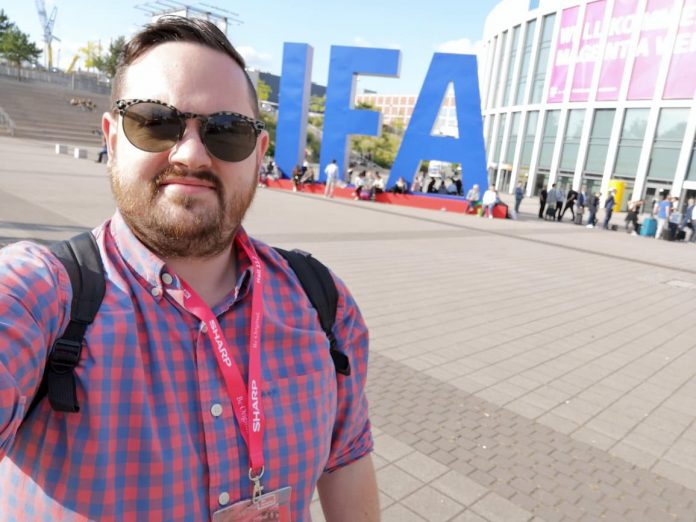 I’m gearing up for my second trip to IFA Berlin to check out the latest consumer electronics, gadgets and innovations getting ready to hit the market. If you could cast your mind back to the original Charlie and the Chocolate Factory, well I’m Charlie and Messe Berlin becomes the Chocolate Factory. Whether you’re prepping for a trip to Berlin yourself or are just interested in what I’ll be checking out, here’s everything you need to know about IFA Berlin.

What Does IFA Stand For?

In the run-up to IFA, there’s an exchange that happens over and over again.

Never even dawned on me, but I can assure you, the IFA I’m going to has got nothing to do with the Irish Farmer’s Association.

Instead, IFA is pronounced like the name ‘Aoife’. As the event takes place in Germany, you might have guessed that the name is also German. What you might not have guessed is that the name dates back to a time when radio was the emerging technology. IFA stands for  Internationale Funkausstellung Berlin, which translates to the International radio exhibition Berlin. It’s also, affectionately known as the Berlin Radio Show.

While some of the heaviest hitters in tech will be on hand in Berlin. You can expect to see innovations from Sony, Google, LG, DJI and Amazon to name but a few. I couldn’t possibly name all the brands on show because IFA feels like two Aviva Stadiums stacked on top of each other and packed with both gadgets and nerds.

Last year was my first IFA and I did expect all of the above, but I was bowled over with the number of home appliances on show too. You see, IFA is one of the world’s leading trade shows. That means there’s also quite a lot of the non-sexy consumer tech stuff on the floor. Washing machines, humidifiers fridges and vacuums also add to the wide variety of items that will line the halls I’m walking next week.

Now that we’re all happy and convinced that 5G isn’t dangerous how are we going to use it? This will be the first IFA since 5G has really taken off. I’m sure there’s going to be lots of 5G powered gadgets on show this year in Berlin and I’ll be hunting them down to get hands on with 5G tech for the first time.

Last year I skimmed over some of the lesser known phone brands, but this year I’m going to give them a lot more attention.

Electric scooters have just been given the green light in Germany. As a result, it looks like there’ll be even more personal electric vehicles appearing at IFA 2019. Single wheel electric unicycles, scooters, bikes and even electric go karts will be on my list of must sees in Berlin next week.

I couldn’t get over the sheer number of air purifiers at IFA last year. Looking at the product list again this year, there’ll be no danger of dirty air again in the exhibition. The difference this year is that one of them is bloody cool.

The Flying Magic Cleaner is an air purifying drone. It flies around your home cleaning the air. I’m slowly getting more and more worried about the amount of dust that appears in my apartment, even more so, the thought of how much is entering my lungs. This is something I’ll definitely be checking out. Imagine this flying around while my Eufy smart vacuum is cleaning the floor.

Last year I saw the tip of the iceberg when it came to home security. This year, there’s going to be a lot more of this at IFA. I’ve spotted countless wireless home security cameras along with a digital replacement for front door peepholes and smart locks from companies like Yale.

It’ll be interesting to see what reps on the floor have to say about this kind of technology with companies like Amazon’s Ring currently coming under fire.

Now, this is something that I could see becoming the new normal in a world where trust in tech companies is at an all-time low. Western Digital, or WD, are best known for their portable hard drives. At IFA they’ll be showing off their personal cloud solutions. Instead of uploading all your files to Apple’s iCloud or Google’s Drive, you setup a network drive at home, connect it to the WiFi and then access it from anywhere else in the world.

I really love this idea and can’t wait to look into it a little further.

Last year was when I met Anker and started reviewing their products on a regular basis. They’ve yet to let me down with all of their brands churning our quality products. I’ve been impressed by everything from the Liberty Air earpods to the Eufy smart vacuum. I’m looking forward to popping over to the Anker stand again this year and seeing what new toys they have on show.

Just before I fly out on Friday, I’ll be heading over to the Huawei press conference at IFA. There’s been a lot of talk about the Mate 30 launch and how Google won’t support. However, at last year’s event, we got to see the latest Kirin processor and Huawei will launch the Kirin 990 processor at IFA this year.

Huawei will have one of the biggest stands at the event, showing off a wide range of their smartphones, laptops, tablets, wearables and non-cellular gadgets. I’ll be spending a bit of time over there for sure to see what they have on show.

Sony is one of the heaviest hitters at IFA every year. It’ll be interesting to see if they release and update to their WH-1000XM3 over ear headphones or maybe release a new smartphone. Sony views IFA as a big conference and usually drops something big at it, so watch this space.

I recently revealed that I’ve turned into a bit of a wine snob thanks to the Vivino app. Technology can turn us all into wine experts so let’s lean into it. At IFA I’ve spotted at least two gadgets that’ll help you get the most out of your wine tasting experiences. One of them is the Vinaera Pro, an electric wine aerator that gives the wine the same flavour as letting it air for 45 minutes.

Next up is the MyOeno. We actually met these guys at Dublin Tech Summit a few years ago and I’m looking forward to seeing how far they’ve come. They’ll be in the IFA Next area, one of the most exciting areas for all of IFA.

I was looking through all the personal audio accessories and thought things were looking a little samey. Then I came across AfterShokz bone conduction headphones. These are a great concept for many scenarios. As the headphones lets you enjoy audio while also letting you hear your surroundings, they’re perfect for people running or commuting by bike or scooter.

Speaking of scooter safety, Cosmo will also be at IFA Next. These guys are creating some great cycling and scooter safety products. Things like smart indicators for your helmet which can also detect accidents and contact your loved ones to come get help. Cool idea right?

The most important thing to note is that from all these things, the real secrets of IFA 2019 won’t be revealed until I walk the floors of Messe Berlin. Follow me on Twitter along with the Goosed account on Twitter for all the latest news straight outta Berlin.