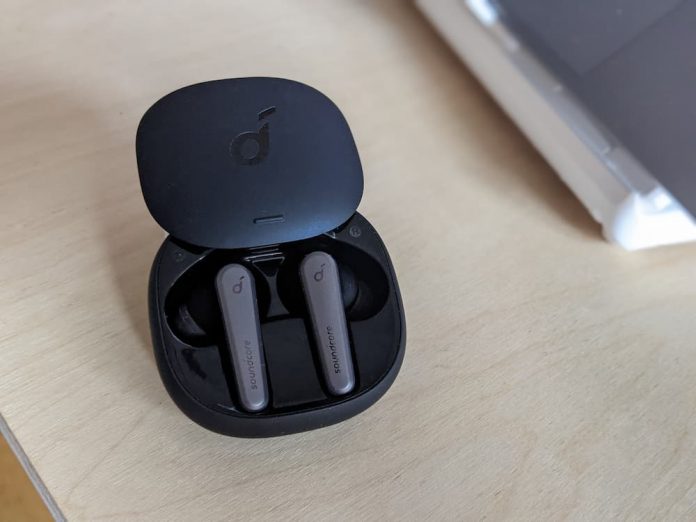 Not that long ago, ear buds were expensive with an absolute maximum of three hours battery. Noise cancelling was fancy technology only found in top of the range headphones. These key specs are thankfully much more accessible these days. A fantastic example of that is the Soundcore Liberty Air 2 Pro ear buds. I’ve been using these for a few weeks. I’m happy to confirm that if you’re in the market for a pair of earbuds, at €130, these are absolutely worth considering. Here’s why.

I often find some reason to talk about some other feature of audio equipment other than sound, but it’s got to be the start point for these buds. While small, and particularly light, the buds remain capable of packing punchy bass and crisp high tones too.

While you may not know Soundcore as a brand, they’ve been making headphones and earbuds for sometime. The first pair I tested were the Liberty Air buds. They lacked a little punch in the volume area but sound quality was great. The biggest challenge facing Soundcore isn’t audio quality. It’s simple that they aren’t a household name. So they’ve cleverly gotten ten Grammy winners to endorse them, including NE-YO and Foxes. Personally, I don’t go for that kind of craic, but if it helps you see past the fact these aren’t made by Bose then I’m happy.

Sound quality is obviously going to be the bread and butter of a pair of ear buds. The fact the Liberty Air 2 Pro don’t stumble here, and in fact that they impress, means the other features they bring to the table could set them apart.

So what are the other features I hear you ask?

I’ve tested some cracking buds over the years. Some favourites, like the Huawei FreeBuds 3, remain in my daily selection for calls or listening on a quick walk. But many share the same spec failing of having quite a poor battery. They advertise three hours and some might be close to really offer 75% of that.

The battery life of the Soundcore Liberty Air 2 Pro buds is genuinely mind blowing. I’m not trying to be overly dramatic here. These buds are light. That usually means short battery life but somehow Soundcore has sidestepped that stereotype. Pun intended.

The buds themselves will last for nearly seven hours of use. Seven hours! Back in the olden days of being able to travel, a single charge of your buds would have gotten you from Cork to New York. The charge case let’s you recharge the buds three times. That’s over 26 hours before you need to worry about being bud-less.

Speaking of the charge case, it also supports wireless charging. This is a great feature for jet setters who also have a phone offering reverse wireless charging. Charge your phone, buds and your bud’s case, all at the same time. This does give the buds an edge over the similarly priced Cambridge Audio Melomania Touch, which while awesome don’t have a wireless charge case.

The inclusion of a wireless charge case is a nice example of the though gone into how the Liberty Air 2 Pros have been designed. I’ve already mentioned how incredibly light the buds are too. Combined with the long battery life this actually fights ear fatigue. Yes, that’s a very real thing.

Everything from the loudness of your audio to the design of your earbuds or headphones can cause ear fatigue. This means ear aches, pressure building up in your ears and possibly headaches. Going further, your music and even conference calls may start to irritate you more than ever.

A well designed pair of ear buds can go a long way towards helping with this and I would consider the Liberty Air 2 Pros to be a top option to combat ear fatigue. While they offer the long battery life that you might require for a day of work, they are light and not too tight in the ear. This means pressure is less likely to build up and you might even forget about them.

The side effect here is that you may feel like the buds aren’t all that secure in your ears. Fine for working at home, but if you’re going for anything more than a walk, you will fear losing a bud. There is quite the selection of silicon tips in the box and dipping into these will make a massive difference when it comes to getting a secure fit. Just remember, the tighter the fit, the more susceptible you become to ear fatigue again.

Call quality vanished as a feature of headsets people cared about until recently. Between work and staying connected with family for afar, call quality is back as a prime feature. The spec page for these Soundcore buds makes that abundantly clear by calling out calls as a key feature. Six noise cancelling mics pick up sounds around you as the buds work to drown them out.

In reality, the buds do indeed offer very good call quality. You can hear some of the background noise on the caller’s end but the voice carries well. I don’t think these would be top of the list for buds purely based on call quality, but considering the rounded overall quality on offer here it’s another string to the bow of the Liberty Air 2 Pro.

At the outset, I pointed out that noise cancelling, in very recent memory, was a premium feature. Often, when introduced on cheaper audio equipment, it also wasn’t very good. This was the one feature of my much beloved Huawei FreeBuds 3 which left the buds wanting.

Noise cancelling was one of those jaw dropping moments for me in tech. I was super late to the party given I think the Sony WH-1000XM2 were probably the first air of active noise cancelling (ANC) headphones I tested. As luck would have it, the Sony WH-1000XM4 landed on my desk this week which means I get to compare the Soundcore buds against a market leader.

I had high hopes, but in-ear buds simply cannot compete when it comes to ANC. They’ve come a long way, but if you’re shopping with the focus purely being on ANC, you should be looking at over-ear headphones. Now, that may sound damning but it’s far from it. The opinion is formed on a pure comparison of ANC. That means without any music playing. As soon as I hit play, I wasn’t even sure if the old extractor was on or not!

What am I actually saying here. Well, ANC is naturally always going to be better with over-ear headphones. By their very design, they isolate more external audio. In-ear ANC technology has come on leaps and bounds. Recently the Huawei FreeBuds Pro knocked this out of the park and left me wowed.

The Liberty Air 2 Pro are on par for ANC here, and I didn’t expect that. If ANC is just something you’d like to have, for these Soundcore buds, it just adds yet are reasonably good spec to a well rounded pair of buds.

These is but one definite draw back I could find with the buds and that’s a lack of multi-device support. In a world of working from home, I often listen to music on my phone while quickly swapping to my laptop for a call. Odd how the use for devices has flipped like that. A feature I’ve become very used to is my headphones being smart enough to swap devices as I used them. Not a deal-breaker, but still. I miss it.

What I keep coming back to here is the price. At €130 from Amazon Germany, or oddly also £130 for UK readers, this is a lot of audio quality to slap into your earholes. My initial reaction to the lightweight design was hesitancy, but there’s no lack of quality audio here. That good news is doubled down on by the lightweight design meaning comfort for longer, supported by whopper battery life.

If you’re an iPhone owner, you’ll probably still find your way to AirPods. But if you’re in the minority seeking an alternative or are either and Android user or working from home person, these could be the answer to quite a lot of your audio questions. If you’re still not sure, drop onto our Twitter and pop us a question.