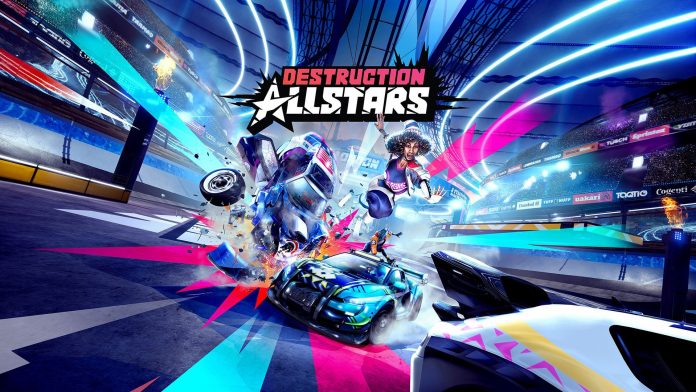 “A delayed game is eventually good; a rushed game is bad for ever”. The immortal words of the creator of Mario and father of modern gaming Shigeru Miyamoto. While generally these words have a good bit of truth to them (Doom Eternal springs to mind as a recent example), the last few months have done their damndest to prove Miyamoto wrong. We’ve all heard the horror stories of Cyberpunk 2077, the new poster child for delayed games that never came good. But now there’s a new kid on the block. A game that is at the same time polished, but unfinished. Rushed, but had a 3-month delay. Exciting and fun to play, but bitterly disappointing and shockingly overpriced. Ladies and gentlemen, I give you Destruction Allstars.

We got our first glimpse at Destruction Allstars during Sony’s PS5 reveal stream back in June where it promised high-octane car-based chaos with a diverse host of characters. Originally planned as a launch title for the PS5, a month before release, it was pushed back from November to February. By way of apology, all those who had pre-ordered were given full refunds and it was announced that the game would be free on PS+ for two months starting in February, the game’s new release date. Now that’s PR done the right way!

It’s a great thing that the game is free too, because to be honest, that’s the only price-tag that is justified right now.

Rev up the fun

I have to say that apart from the original trailers I had little knowledge of this game when I first jumped into it. After an extremely helpful tutorial I jumped into a free for all match and had an absolute blast. The core gameplay loop is as simple as “smash other cars with yours, and avoid having your car smashed”, and it really doesn’t get much more complicated than that. There are a couple of other game modes that I’ll talk about later but they’re all just variations of a remarkably simple (but effective) theme. The controls are as simple as they come as well, with acceleration, steering and drifting mapped to the buttons you’d expect. However, every car has two boosting abilities too, one for a forward burst of speed, and another to give you a quick left or right shimmy. These are invaluable for causing damage to other vehicles or characters and are on a cooldown timer to prevent anyone just spamming boost to wreak maximum havoc.

Each individual racer also has their own unique abilities. One of these is their “on foot” ability that ranges from setting fire to the ground you run over to being invulnerable to being knocked down by enemy vehicles. The other is tied to their car, a unique “Ultimate Ability” similar to what you’d see in Overwatch, Gears 5, or a multitude of other multiplayer games these days. These abilities, like their users, come in all shapes and sizes from covering your vehicle with massive spikes to activating a massive shredder mounted to your front bumper. Some of these are less than helpful, however. One is just a covering of smoke on vehicles you hit. Not gonna be of great utility in many games I don’t think.

The roster features an impressively diverse cast of characters, with people of every size, shape, colour, and from every point on the gender spectrum being represented. It can be fun to play as each of them to find out what their ultimate is and see how it works, unfortunately, this is pretty much the only way of learning the basics of each character. If you’re new to the game, there’s no way of knowing what your character’s abilities, strengths, and weaknesses are going to be before jumping into either a live online match or the Arcade mode. This can lead to some very un-fun matches if you get stuck with a character you don’t gel with and may put some players off quite early on.

This game is to be seen, not heard

As with most games on the now-current gen consoles, Destruction Allstars looks fantastic, with bright, vibrant colours on the vehicles and arenas, and more particle effects than you could imagine. Each driver has a host of skins and costumes that you can deck them out in as well as different paint jobs for their car. These can be earned either through gameplay or via (you guessed it) microtransactions and in-game currency. While this is a trend in gaming that I have never liked I feel I should trot out the usual response of “at least it’s only cosmetics that are purchasable, and there are no pay-to-win mechanics”. That’s about as charitable as I get with this kind of thing.

Unfortunately, while the visuals are something to behold, the audio isn’t quite up to snuff. The sound design of the crashing cars is great, and the voice acting for each of the characters really captures their personalities quite well, but how’s the music? Well, there isn’t any. No, I’m not joking. When you’re playing a match there’s literally no music. It’s just the characters, the cars, and the announcer. For a game that’s set in a massive stadium with massive speakers visible on screen this seems like an egregious oversight to me. It’s not like this is a bug or a glitch or anything. According to a Reddit post made by the community manager this was intentional! This misstep is only compounded by the fact that, on the character customisation menu, the music (yes there’s music in the menus, but not in the game itself) will change slightly to match the personality of the character that’s highlighted. For example, Ultimo Barricado, a luchador themed driver will add a Latin beat to the theme, whereas Fuego will add some heavy metal undertones. This is an excellent piece of polish that really adds to the disappointment in the overall product.

Come for the fun, stay for… what exactly?

The game modes leave a lot to be desired too. While the core gameplay is fun there just doesn’t seem to be enough of an incentive to keep me playing. As I said, the 4 game modes all centre around crashing cars as much as possible. The Free for All mode is pretty self-explanatory I think, while Downfall is exactly the same game, just on an ever-shrinking platform. Not exactly a massive formula shake-up. There are two team modes too. Carnado encourages you to smash up as many cars as possible before “depositing” your own car in a central column of purple smoke. Stockpile is basically the same but with a King of the Hill vibe, requiring each team to hold certain points in the arena by continually depositing gears from cars they’ve wrecked.

There aren’t any rewards for progression or doing well in these matches either. Outside earnable coins that can be used to buy emotes and skins there doesn’t seem to be any incentive to complete the daily or weekly challenges. There’s even a prestige system that seems like it offers nothing for hitting the maximum level and re-upping.

Why couldn’t we have gotten something a bit more creative than “whoever smashes more cars wins”? Why not something like a guardian mode, where each team needs to protect one driver from being hit while at the same time trying to hit the opposing team? Or a Last Man Standing mode where there are no respawns? How about a Destruction Derby type mode where you have to race through checkpoints while taking out the other team at the same time?

No pay, no play

To be fair, that last example does exist in the game. It’s in the paltry “challenge mode” where, in theory, each character has their own story to play through and complete various challenges in to earn those (apparently) coveted skins and emotes. I say in theory because you are only allowed to access Ultimo Barricado’s story from the get-go. You don’t unlock any others through gameplay either. No, you unlock them with a credit card. You read that right. This game was due to retail for the price of €70 and they have the audacity to ask you to pay for the campaign. I was annoyed enough about the skins and emotes being paywalled, but to excise the campaign from the main package for the sake of wringing up to a fiver a pop from the players is just unforgivable in my opinion. These aren’t just collections of missions that are linked to each character either. No, there’s a story for each and there are fully animated cutscenes. In order to get the full experience of this game after March, players will be asked to fork over nearly €150 as well as their PS+ subscription and then they may pay for skins and emotes on top of that. If this is what passes for a first-party showcase title nowadays, I’ll just get off the bus right now. I want no part in it.

Hit the brakes and back away

All this leads to the conclusion that this will probably be the most disappointing game I’ll play in 2021. As I said, I had a great time playing a few matches and causing untold destruction with my fellow players, but there’s just not enough to keep me coming back. Deep down there is the potential for this game to be one of the greats, a real mainstay of my casual online roster. But that potential is buried under so many layers of terrible choices, exploitive monetization, and low effort corner-cutting that it may be irredeemable at this stage. I’ll be back to update this review if there are any significant changes but for now, get it for free while you can, or don’t get it at all.