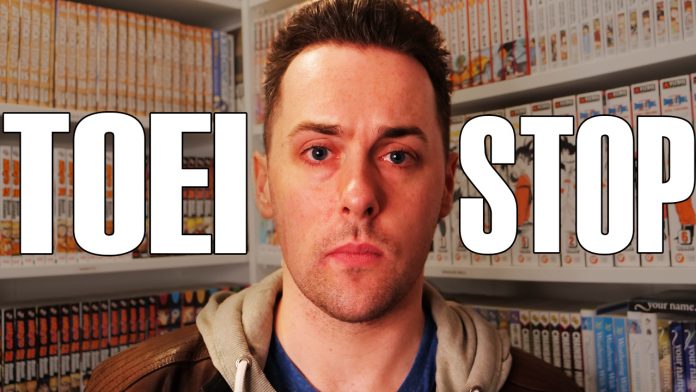 It’s not controversial to say that YouTube’s copyright claim system is not fit for purpose. In theory, it’s there to protect content from creators such as musicians, artists, and animators. If someone was to upload something you made and make money off it, you’d be furious, wouldn’t you? Of course, you would! However, YouTube’s current model for making sure this doesn’t happen goes too far in the opposite direction. That’s how an Irish Youtuber by the name of Mark Fitzpartick (TotallyNotMark to you and me) got 150 of his videos effectively deleted overnight.

Mark’s channel is largely an anime and manga review channel. He makes top-notch content that’s gotten me, and many others, through lockdown. On top of that, he’s a talented artist in his own right with many videos of him and his staff drawing fan-favourite characters in styles of different comics or manga. He’s reviewed some of the top series from Japan over the last couple of years. The likes of Dragon Ball and One-Piece make up the bulk of his content, but he’s also got videos on Hunter X Hunter, JoJo’s Bizarre Adventure, and Berserk to name but a few.

Now, the Dragon Ball and One-Piece anime are owned by a company called Toei animation, one of the biggest animation studios in Japan. These are the shows that are at the center of all this. In the space of a few hours, Toei Animation had gone through Mark’s channel and claimed that 150 of his videos were in breach of copyright as they “contained content owned by Toei”. I’ll explain those inverted commas later. In what must have been total shock, Mark took to Twitter and YouTube with a video explaining his current situation. I would urge you to watch it as he outlines where he stands excellently.

If a YouTube video gets claimed by a third party for copyright the uploader has the right to challenge this. The party that claimed the content, in this case, Toei, can then decide if the challenge is legitimate. This essentially gives the claimant all the power. This process can go back and forth twice until the uploader gets issued a strike by YouTube. The strike will be removed if the content is successfully reuploaded either by the say-so of the claimant or after a certain amount of time has elapsed. But here’s the kicker, too many strikes and your channel will get deleted permanently. This is why it would take so long to claim all 150 videos. Toei can just ignore the challenges seeing as they lose nothing either way meaning Mark can only challenge so many claims at once.

As Mark says in the video he and his company are in dire straits. He cannot monetise nearly three years’ worth of his work and he essentially cannot get all the videos back any time soon. Again, as he says in the video, he would be nearly seventy years old by the time his channel was restored if he followed through and jumped through the myriad bureaucratic hoops. Mark started his channel after a shitty day at work and now he has just had a shitty couple of days at his dream job. You’d have to have a heart of stone not to feel for the guy.

And here’s the thing; Mark has done nothing wrong. Every one of the videos is covered under practically any definition of “Fair Use”. He’s using short amounts of animation to highlight points he’s making in video essays. That’s it, if even. Remember when I said that Mark was a talented artist? Those videos I mentioned where he’s just drawing the characters have been claimed as well, even though they contain no animation owned by Toei. Remember those inverted commas earlier? Yeah.

How do things stand right now?

Thankfully Mark’s video and Tweets have gained a good bit of traction online with content creators rowing in behind him. Philip DeFranco and PweDiePie have discussed the situation on their channels while animators like Rubber Ross have made their feelings known on Twitter. The aim of all of this is of course to get the videos reinstated and have Toei make some kind of statement apologising for their actions. However, this needs to also trigger a deeper review of YouTube’s copyright claims system in general. There’s no perfect system for sure, but this is about as far from perfect as it gets.

If you want to help out there are a few things you can do. Sharing this article or Mark’s tweets would be an easy starter for ten. Sharing Mark’s video would be another great way to get the word out. Check out the content he still has on YouTube as well, it’s brilliant. He’s just started a three-part review of all the live-action Spider-Man movies for something he calls Spideycember. Some of his claimed videos are even on his Patreon so if you want to chuck him a few euro I’m sure that would go a long way. I’ve been a patron of his for a while now and I’ve upped my contribution since this has come out. Finally, Mark is calling for a boycott of all Toei animations until something is done. This means no streaming, buying, or other legitimate viewings of their content. This includes the new Dragon-Ball Super movie coming out next year. This is a boycott that I’ll be taking part in despite Dragon Ball being my absolute favourite show. What has happened to Mark is absolutely shameful and we cannot continue to support companies that carry on like this and we need to stick up for independent creators who have done nothing wrong.

Through working with a YouTube rep some of the videos have been released by Toei, with more going up as I type. However, the majority remain blocked and Mark’s contacts with YouTube have resulted in him being directed to Google’s FAQ page (not exactly a huge help). Mark has also said that he has been bowled over by the support the community has shown him and that he will be donating his portion of Patron earnings to a charity that he will reveal later. He has also made a video letter in spoken Japanese with the help of a friend so that it may more easily reach Toei and the Japanese public. More details can be found in his video below.