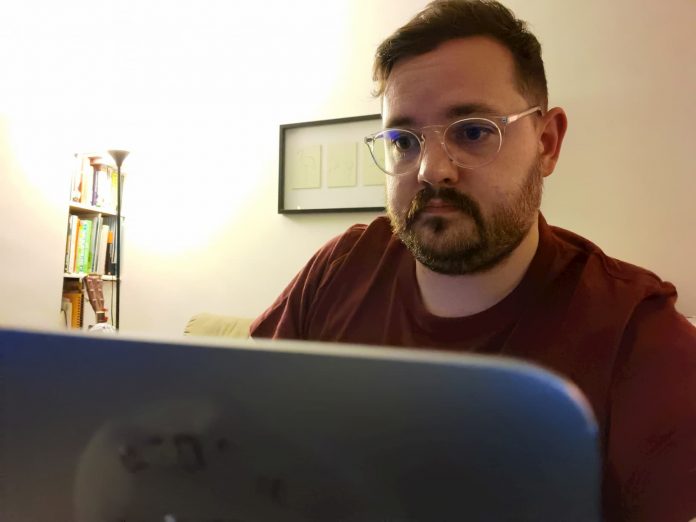 There’s a range of cliches I could kick this article off with given the world we’re living in right now. You know, like “new normal” and all that jazz. Right now, we’re staring at screens more than ever. A recent study by Sapphire Eyewear claims that our screen time has increased by 45% as a result of isolation during Covid-19. If your office job, from time to time you’d get up from your desk and have a face to face meeting from time to time with a fellow human. Those meetings are now video calls and combined with the rest of your workday, you’re eyes are taking a pounding. Some people end up with low prescription glasses but others with perfect vision have turned to blue light filtering glasses. These are a relatively new trend but the big question is, do they work and are they worth spending some money on? I got a pair of blue light glasses from an Irish company called Sapphire Eyewear and I’ve been testing them out to see if they’re worth it.

What Are Blue Light Glasses?

Blue light causes an apparent issue by being a higher energy light which leads to particularly highly strained eyes. Overexposure to blue light also impacts our ability to sleep. The solution is blue light filtering glasses. You wear them during the day while working in front of a computer and at night to prevent the blue light from screens from keeping you awake.

These come in both prescription and non-prescription lenses and a wide variety of styles. Indeed, many spreadsheet toting business folk believe the blue light glasses market is set to exploding in the coming years. However, many still doubt whether these things work at all. Jon tested out Ambr glasses before and found them great, so I was interested to see how I got on with Sapphire Eyewear’s take.

Who Is Sapphire Eyewear?

Sapphire Eyewear is based out of Galway and Cork, founded by Dr Dearbhaile Collin and her husband Seamus Flynn. The story is awesome. The couple spent their honeymoon in Zambia and were shocked to learn a country with a population of 16 million people had just 48 qualified opticians. During the honeymoon, Dearbhaile noticed headaches she was having while researching had stopped. It was the starting point for a connection being made between screen-time, blue light and the impact on both the human mind and body.

Seamus is an optician with over 20 years experience. Over the past five years, he noticed an increase in eyestrain complaints. The result was all of this coming together with an offering of blue light glasses where a portion of the profits fund eyewear in the developing world.

To get tested, the Sapphire team sent over this lovely looking pair of blue light filtering glasses.

Let’s break down these glasses a bit.

I can’t help but feel that Jurgen Klopp has made transparent frames the best looking frames on the market. The Rubino look quite similar to the Liverpool manger’s frames so that’s a good start for me!

In terms of design, these glasses are pretty cool. They are obviously only going to appear to certain people but the range Sapphire has on their website is broad to say the very least. The big test was taking part in various Zoom calls and I can confirm, compliments were had. Personally, the design on the temples wasn’t really for me but I only saw that when opening the box and it never occurred to me again.

The glasses are very comfy, stay in place requiring very infrequent adjustment. As you might expect, they’re shipped in a tidy glasses case and come with a cleaning cloth. Standard stuff so far.

This glasses are suitable for people with or without prescription. If you do wear glasses normally, you can include the strength of lens you need and get a pair that meet your needs.

The big question is really about the blue light blocking. So does it work?

The real question here is whether or not this has an impact on eye-strain and headaches. The answer to that question has stumped people much smarter than me.

Take Jon for example. He’s worn similar glasses and found they’ve worked for him. But let me place devil’s advocate here. This could be the placebo effect. I generally look at the larger picture. If you’re researching and buying eye strain and blame your computer screen, you’ll end up at blue light glasses eventually. When you buy a pair, you’ll likely also be trying to cut back on screen time and see results.

I’m waiting to be convinced either way.

“The concern with blue light has really gotten to another level,” says Sunir Garg, a clinical spokesperson for the American Academy of Ophthalmology who seems more concerned with the surge in interest in an unproven solution more so than the solution itself. And that’s a fair concern.

Whether these glasses work or not, it’s crucial that they are not sold as a miracle cure and that’s why I really like Sapphire Eyewear.

Here’s the simple truth about blue light glasses. I can’t tell you, beyond scientific doubt, that blue light filtering glasses will solve your tired eyes or headache issues. From what I’ve read researching this article, from Jon’s experience and my own, the best I can come up with is “they might”. The phrase is “anecdotal evidence” points to some sort of positive impact but that’s the best I have to offer.

Here are some more facts though.

You Always Wanted Glasses Didn’t You?

I used to wonder what life with glasses would be like. Eventually, I got a pair because I was slightly, and I mean slightly, longsighted. I probably didn’t need glasses at all but I was happy to get a pair. Why? I thought they looked cool. They’d suit a certain look, an aesthetic, that I liked. With these glasses from Sapphire Eyewear, the lenses don’t need to be prescription so you could buy these purely because they look cool and they make you look smart.

As an added bonus, they might make using a computer that little bit better and help you sleep too.

You Will Help People In The Developing World

I already detailed how Sapphire Eyewear came about. Not only did the wife and husband team want to address modern eyewear issues but they also wanted to help the developing world. They’ve teamed up with Mission For Vision which means when you buy a pair of blue light filtering glasses another pair will be donated to people in need of eyewear in developing countries.

Once again, as an added bonus, these glasses you buy might make using a computer that little bit better and help you sleep.

If you want to reduce your headaches and eye strain without taking a chance on the glasses, try these steps:

You can be sure that you’ll soon be hit by Instagram ads being run by some snake oil salespeople promising you the sun, moon and stars with blue light glasses. Many will oversell the benefits completely with assurances these glasses will change your life. Unfortunately, I just can’t tell you if they work or not.

You can pick up a pair to try for yourself over on the Sapphire Eyewear website with a non-prescription pair setting you back €55. A good price for a potential solution and knowing that you’ve helped someone in need.