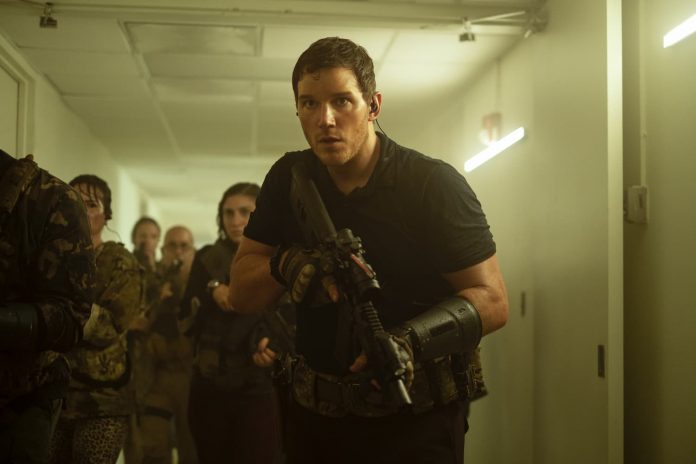 Right. You’ve lost the run of your self during the Prime Day Sale and you want to get the very most out of that Prime membership. You scroll through the Prime Video listings and see a sci-fi blockbuster looking movie starring Chris Pratt by the name of The Tomorrow War. Do you watch it? Well, I’ve watched it so you don’t have to.

What Is The Tomorrow War About?

In the very near future, we’re talking World Cup 2022 in Qatar near future, a World Cup game is interrupted. Beaming onto the pitch are people from the future. 2051 to be more specific. Aliens known as Whitespikes have invaded earth and they are well able to fight. After sending military forces from around the world, just 20% return from battle. It’s not looking good so a worldwide draft kicks off sending citizens of earth to fight.

Chris Pratt plays Dan Forester a former green beret and current school biology teacher. He gets drafted and sent into the future to fight.

This movie is all about that fight and the wider fight for humanity’s survival.

What Are They Fighting In The Tomorrow War?

There are so many timelines criss-crossing in The Tomorrow War that telling you much about the story without spoiling it is really bloody hard! I can, however, touch upon what Chris Pratt and his fellow rat-tag bunch of soldiers find themselves up against. Humanity is ad war with aliens called Whitespikes. These blighters can fire spikes from a tentacle and I guess that’s where the name comes from.

Is The Tomorrow War A Sequel To Edge Of Tomorrow?

Some have drawn similarities between the Whitespikes and the aliens Tom Cruise fights in Edge of Tomorrow. They’re not related and the two movies don’t exist in the same universe.

Is The Tomorrow War Good? Is It Worth Watching?

I’m going to say skip this one. While The Tomorrow War tries to touch upon some clever themes like global warming and the general idea of how we should be trying to leave a better planet for our kids, overall it just drags on. The film keeps getting confused between being a more serious Alien-type movie and leaning into Pratt’s more humorous side.

The story has the potential to weave a really clever time-travelling timeline but it all ends up being a bit silly and rushed. The Tomorrow Runs for 138 minutes, yet amazingly parts of the story feel rushed. It’s one of those films where you have to leave all grasps of reality at the door but even still this sci-fi romp pushes its luck once too many times.

The whole way throughout the movie we learn of random skillsets and resources that fringe characters have that come back to be critical in the resolution of the story. For example, such a pivotal “end of days” moment in human history can partially come down to one of Forester’s student’s odd obsession with volcanos.

It’s all just a bit much.

There are some funny moments to generate a giggle, but the groan I let out realising there was thirty minutes left told me everything I needed to know about reviewing this movie.

Where To Watch The Tomorrow War