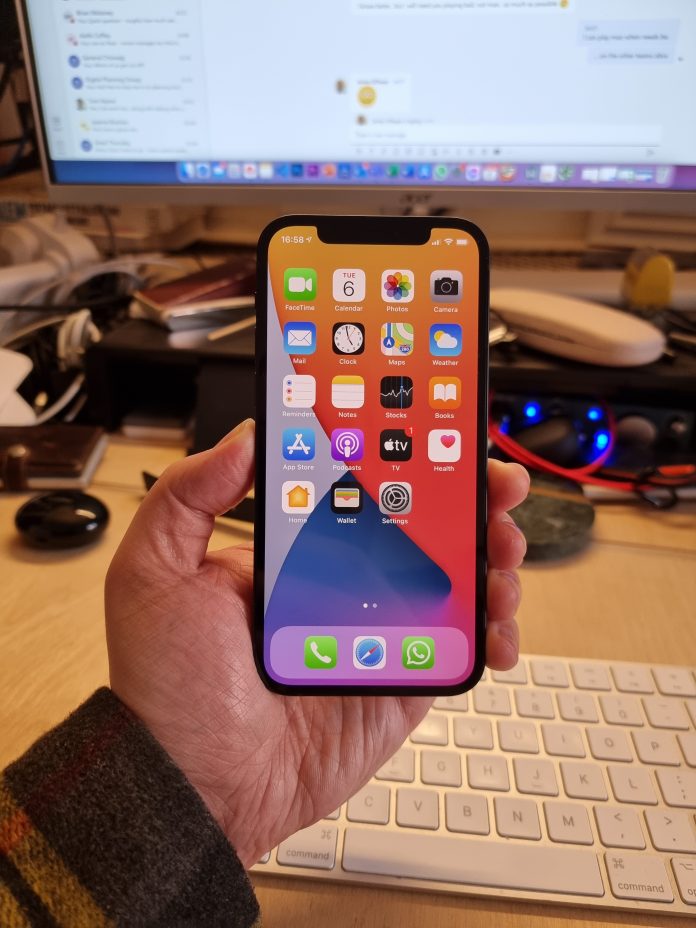 My first ever smartphone was a Samsung Galaxy Europa i5500. From there, I graduated to the iPhone 3GS before the Samsung Galaxy Note 2. I had a brief stint with an iPhone 5c as a work phone but other than that, my daily rider has been Android. I’ve been massively critical of iPhone for years. Their underwhelming launches are repackaged features from five-year-old Android phones. So when I got my hands on the iPhone 12, I expected to be testing it for a few weeks before returning to my Google Pixel 5. It’s been a few months and I’m still using the iPhone. Here’s why.

The iPhone 12 is a very neat and tidy phone.

I might be alone or perhaps in the minority here, but during lockdown I’ve seen myself gravitate towards smaller smartphone screens. This had become clear by the October of last year when I was loving my pure Android Pixel 5 experience. This meant I was already kind of conditioned for the smaller screen of the iPhone 12 which measures in at 6.1-inches, actually a shade bigger than the Pixel. Apple’s Super Retina display is nice and crisp, clear in dark settings but also in direct light, which we’ve had a surprising amount of this summer.

Apple doesn’t try to engineer slim bezels. Instead, they seem to embrace a black bar around the screen that leads your eye to the notch in the forehead. As is so often the case, the notch ends up being totally unnoticeable despite being somewhat sizeable.

One of the benefits of that large notch is the sensors required to power Apple’s FaceID unlocking. I’ve been impressed by FaceID and, more importantly, how it integrates seamlessly with so many apps including my banking apps and password manager. I totally get why Apple has gone “all in” with FaceID. It’s because it’s such a great way to unlock your phone. Unless you’re unlucky enough to find yourself in a pandemic where everyone needs to wear a mask.

Yes. Apple went all-in on FaceID right around the same time that we all had to start covering our faces. This now means that every time you want to use Apple Pay in a shop or something similar, you have to type in your pin. A mild convenience but still a by-product of Apple’s obsession with what perfect design looks like, despite tech not always being in the perfect situation. Just look at Apple’s Magic Mouse that can’t be used while charging because Apple only wants you to use it wirelessly.

You can unlock your phone while wearing a mask if you have an Apple Watch but this won’t work for other wearables like Fitbit Sense etc. One thing I’ve not mentioned is a fingerprint sensor and that’s because Apple just doesn’t use them anymore. Unless you’re in the market for an iPhone SE.

More broadly, I have to say the build quality of the iPhone 12 has really surprised me. What I mean by that, more specifically, is that I’ve dropped my naked iPhone a few times and it survived. My past experience and the experiences I’ve often heard from friends are to the contrary. But today, iPhone seems to be a little bit more robust. I still recommend a case to protect your phone and to reduce all the mucky fingerprints on the glass back. Quick note on this bit.

I bought myself the Pink Citrus iPhone 12 case direct from Apple. It’s a perfect fit and offers a nice gap between your screen and the ground in the event of a slip. If you have MagSafe accessories they are all fully compatible with this too. While I liked the design of the iPhone 12, I just never felt comfortable with it naked. It’s also a fingerprint and dust magnet. This case is just the perfect solution

I would say the vast majority of the pictures I snap with my phone these days are simple shots of friends, products, food or random things throughout the day. Perhaps this is a byproduct of being locked down, but I don’t need a camera with 50x zoom most of the time or that shoots perfect pictures of the moon. I need a solid camera that’s in my pocket and ready to go. The iPhone 12 does just that. It’s solid.

It’s also capable of shooting fantastic video quality. I’ve been using the iPhone 12 connected to my iPad using Filmic Remote to shoot videos recently and love this set up. Despite being the “entry” iPhone 12 model, it can shoot 60fps 4K video. More than most people would ever need.

If there was one area I expected to be slating, it’s battery. For me, Apple battery life in the past has been the biggest driver of power bank sales globally. Today, they’ve just about cracked a full day battery with average usage. Now, I do have to add that I’m pleasantly surprised with just how long the iPhone 12 battery was lasting. But at the same time, it’s just not en par with the some of the Android power beasts out there.

There’s also Apple’s frustrating continued insistence to use Lightning charge ports. In a world of USB-C where even MacBook and some iPads use USB-C, Apple continues to use their own proprietary charging technology. The result is a greater chance than when out and about, you won’t be able to find an iPhone charger. It’s been rumoured that Apple is going to go big on wireless, to the point where iPhones of the future won’t even have charge ports.

Seemingly, that’s how much Apple doesn’t want to adopt USB-C.

This Is One Fast iPhone

Apple claims this is their fastest ever iPhone. This is for two reasons.

While 5G technology is arguably quite well established in Ireland now, this is still the first iPhone to support 5G. Now, while the big three networks in Ireland offer 5G plans, it’s far from being the norm. It’s also not as groundbreaking a technology as the move from 3G to 4G. Despite all of that, the iPhone 12 has set some blistering speed tests for me.

I have 5G and regularly run speed tests because, let’s face it, that’s the main thing people do on 5G. While out and about in Dublin City, I’ve had the iPhone 12 hit speeds twice as fast as my home fibre broadband. On one humorous occasion, one of my friends nearly spit their lunch out.

These kinds of speeds don’t always impress people. It’s one of those “if you know you know” things. But the iPhone 12 is lightning fast.

Years of reviewing Huawei devices has really made me appreciate chipsets. Reason being that I’ve been shown how the world’s best camera hardware needs incredible processor power to finish the job. Apple’s A14 Bionic chip is fantastic, acting as the driving force behind several key features of the iPhone 12, from the camera to power management.

This all makes sense given that Apple has started to shift a lot of their resources towards research and development in this area. The “Apple Silicon” MacBook range has been greeted very warmly by the tech industry indeed, and the iPhone 12 is another chip gem in Apple’s crown.

Moving From Android To iPhone

I’m going to give you my overall verdict on the iPhone 12 in a bit, but first I want to touch upon how big a change this was for me. To many, it might seem a long overdue move. I’ve had a MacBook for years and last year bought myself an iPad. What I never really noticed was that I was slipping into Apple’s famous, or infamous, eco-system. I love the power and flexibility of Android phones which is why I never took the leap with iPhone.

I was missing out on so much.

The iPhone 12 has slotted so nicely into my life that I can’t see myself going back. I shoot a video then AirDrop it to my MacBook for editing. All of my apps work so well on iPhone. Why? Because developers always focus on perfecting their apps for the small range of Apple smartphones before looking at the seemingly endless list of Android phones, coming in all shapes and sizes.

I’ve even gone and bought myself an Apple AirTag because I can feel myself committing to Apple for the near future.

After years of slagging Apple and not understanding why people love iPhone, I now love iPhone. I now see that the whole Apple versus Android thing is about personal preference and, even more critical, personal needs. Would I like a big powerful sports car? Yes, but I can get around Dublin faster on a Dublin Bike.

The greatest shock of all is that I’m weighing up the iPhone 13 Pro as my next phone. This is wild for me to accept!

I cannot stress enough just how big a critic of iPhone I’ve been over the years. Apple hasn’t necessarily changed, but I have. The iPhone battery still isn’t incredible. The speakers are sub-standard and the camera isn’t the best in the market. But it’s not all about having the worlds best specs and features. It’s about creating a phone that’s simply brilliant. That’s the iPhone 12.

It’s a clever range of phones from Apple, with something for everyone. However, the iPhone 12 is probably one of the best phones I’ve ever used and it’s just so unlikely to disappoint.

Should You Buy A Refurbished iPhone 12?

Regular readers will know that this phone I tested wasn’t brand new. It was an immaculately refurbished iPhone 12 from Refurbed.ie. As I mentioned, I’m giving the iPhone 13 Pro some serious consideration later this year and buying refurbished will absolutely be on my mind. My MacBook is an refurbished machine and now so is my iPhone 12.

You can save a small fortune and still get the iPhone you love by going down this route. Right now, the iPhone 12 will set you back €929 from Apple. That same iPhone 12 refurbished by Refurbed.ie will cost you just €720. Prices vary a lot based on supply and demand, but it’s definitely worth a thought if you’re in the market for a new iPhone.