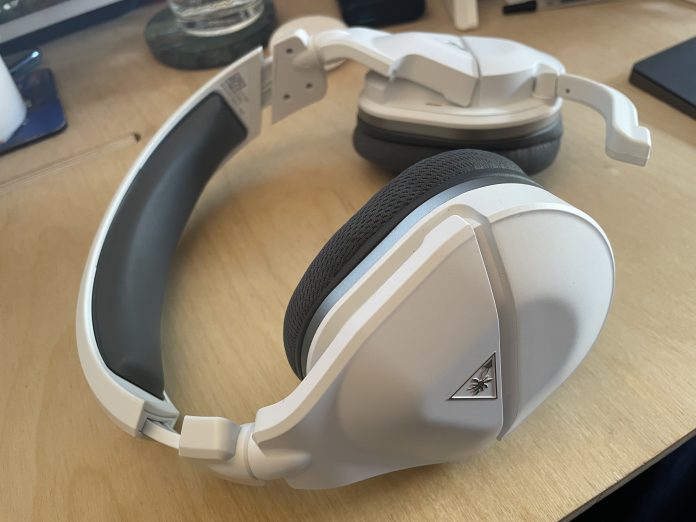 The ever expanding world of audio accessories isn’t just for music lovers. Gamers are arguably just as picky about their headsets, but they’re just looking for different specs. If you’re a streamer, you also have to keep one eye on looks of course. Turtle Beach is a market-leader when it comes to gaming headsets and their new Stealth 600 Gen 2 is attemping to corner “perfect all-rounder” market. Let’s see how they fare.

I had been in the market for a gaming headset since nabbing myself a PlayStation 5. The draw of 3D Audio promised by Sony’s own official Pulse Headset opened the door. Naturally, Sony’s own headset is going to work really well if you’re after an awesome 3D Audio experience. But I wasn’t expecting Turtle Beach to be able to compete, but compete they do.

The Stealth 600 Gen 2 headset taps into Sony’s 3D Audio tech, delivering an expansive soundstage. While the natural noise cancellation leaves a bit to be desired, this headset makes up for it with power. Turtle Beach also has a trick up its sleeve in the shape of Superhuman Hearing. This is the gaming equivalent of being able to hear a pin drop, pulling in incredible an virtual soundstage allowing you to pinpoint the enemy’s location.

I did find that from time to time, particularly if the game and my surroundings were in complete silence, I may hear a slight hiss through the headphones. But it’s a minor concern to flag given than any other surrounding or in-game noise was drowing that out.

It’s not all about hearing when it comes to gaming either. The mic is also critical and this mic is crystal clear. Personally, I also really like the fact the mic is muted or unmuted by folding the boom away neatly into the headset.

This headset focuses on the most important design features to ensure you’re comfortable during a marathon gaming session. They weigh in at just 290 grams making it very easy to forget you’re even wearing them. The light material around the earcups means air can circulate around your ears. Trust me, this is welcome.

The Stealth 600 Gen 2 isn’t the most flexible gaming headset on the market, but this isn’t so much a sacrifice as it is ensuring a secure fit. The combination of breathable material, a faux-leather cushion on the headband, and an overall snug fit make these the most comfortable gaming headset I’ve ever tested. You can adjust the headband too with a satisfying click. There’s even a numbered track so if there’s more than just you using these, you can all remember your preferred setting.

How Durable Is The Turtle Beach Stealth 600?

One drawback of the Stealth 600 Gen 2 is one which features across most gaming headsets. They feel considerably cheaper than they are. It’s a total plastic fest. If you have a tendency to rage-quit and fling your headset across the room, I’m not convinced these will survive much.When you tap the plastic you can hear it and it’s

loud. Along with the breathable materials on the ear cups, you do lose some natural material noise cancellation, but the headset makes up for that when it comes to pure volume and general sound quality. Finally, if I had to be really picky, I’d also say there’s a lot of knobs and buttons on the left headphone. If you need to change something in the heat of battle, it’s almost certainly going to annoy you at some stage.

A Great Working From Home Headset

One final note on design. This headset is glasses-friendly which immediately shouts “working from home” headset to me. Being glasses friendly isn’t a gimmick either, it makes a real difference you have a headset and glasses combined for any extended period of time. If you’re in the market for a new headset for Zoom or Teams calls and you’re a gamer, look no further.

One big plus for the Stealth 600 Gen 2 is the fact they are completely wireless. If that game of FIFA just got “standing up” levels of intense, you don’t have to worry about tripping over a cable. It’s important you take note that these aren’t your regular connect through Bluetooth headphones either. In the box, you’ll find a dongle that you plug into your PC or console. Sidenote: Turtle Beach Stealth 600 Gen 2 comes in two different models depending on what you plan to game on.

The connection running through a dongle is a bit of a double edged sword. It really simplifies the connection process and during my testing I didn’t one experience any drops in audio. I did feel that the connection could start up faster and, when looking to game without the headset, if the dongle was plugged in the TV would appear muted because the default output remained the dongle. These are all really small problems, the latter being fixed with a quick switch in the menus in a matter of seconds.

I’m guessing that another benefit of the dongle is the incredible battery life that the Stealth 600 Gen 2 headset churns out. Turtle Beach advertise a 15-hour run time. I didn’t track it, but I’m almost certain I’ve gone over that and don’t recall charging the headset at all. I could be right or wrong, but the important take away there is that you won’t be plugging these in every two minutes to get some juice back into them.

Verdict: Is The Turtle Beach Stealth 600 Gen 2 Worth It?

If you’re in the market for a typical pair of headphones, you should expect €100 to buy you a more premium feel than what the Stealth 600 Gen 2 has to offer. But these are not typical headphones for everyday use. These are a gaming headset, designed for marathon sessions.

You can see Turtle Beach has nailed designing a gaming headset for gamers. For every job, there’s a right tool and these are the perfect audio tool for gamers. The one additional callout, as I’ve already mentioned, is that these would be a nice option for working from home too. If either of those sound like you, here’s your new headset.

This specific headset is available in Smyths Toys along with a wide range of other gaming headsets. They’re also on Amazon.co.uk but right now Smyths is cheaper.