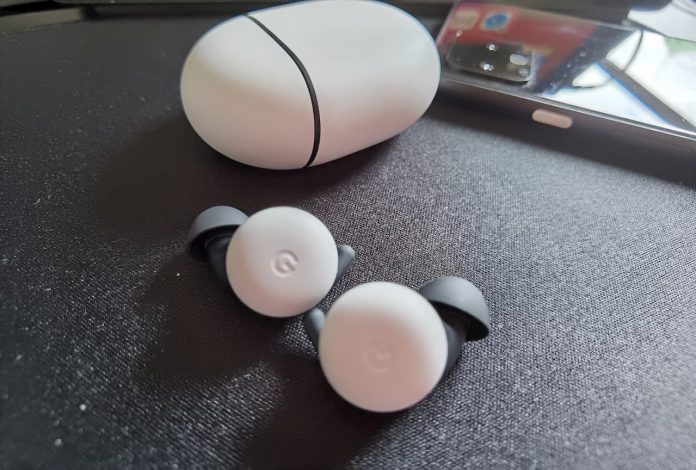 Do you remember when there was a genuine shock we, as a society, decided to kill the headphone jack? In hindsight, it makes total sense. In fact, it had to happen before Bluetooth audio accessories would get really good. When it comes to over-ears, the Bose 35 QCii are still a market leader for me but I’m currently testing the JBL Club One and they are mind-blowing. When it comes to buds, many love AirPods but it’s Huawei’s FreeBuds 3 which still offer the best overall experience. Google usually doesn’t do things by half measures, but its first Pixel Buds were a little disappointing. They went back to the drawing board and have created a new pair of Pixel Buds, the most comfortable earbuds I’ve ever worn.

Today, the Google Pixel Buds launch in Ireland. I’ve been using them for the past few weeks so here’s the inside line.

The Pixel Buds are distinctly Google. They are really low-profile and subtle when wearing them. When you get sent these things to review, you’re actually given a sheet of features. I never read them because I feel they influence my review, but I did noticed that they call out taking off a jumper while wearing these buds means you’re less likely to knock them out. That’s thoughtful design right there people.

Let’s be honest here though. There’s one element of the design that will make a pair of headphones win and that’s comfort. I rarely wear bud for that long but you genuinely can forget you’re wearing the Pixel Buds. They’re light but also secured in your ear with a twist so there’s no fear you’ll lose them. The buds come with a selection of tips to ensure a comfortable fit. The buds are IPx4 rated so rain or sweat shouldn’t be a problem making them great workout earbuds.

Google has also managed to somewhat nail gesture controls on a pair of buds. Something that many have tried and failed. The secret seems to be to keep it simple and have the same controls across both buds. Tap either bud once for play or pause, twice to skip, three times to rewind or swipe to adjust the volume.

I’ve decided the case warrants a section to itself.

The matte soft-touch case and clean white buds follow design principles that just scream Google. The case is probably one of the coolest things going on here. It has a bit of weight which I find reassuring when I panic thinking I’ve lost my charge case. The case also supports wireless charging which, while not on the Pixel 4, does feature on many phones these days. If you want something more traditional, so to speak, the good news is that it’s a USB-C case.

In the past, I’ve sometimes felt Google products can feel a little cheaper than the expectation set by their premium looks, but not this time. Everything with the buds feels deliberate if that makes sense. When the buds sit into the case, the snap into place to charge and are held magnetically. When you open the case it locks into the open position. It’s terribly satisfying and I hope Google has really developed the hinges on this case because I can see myself playing with this like a fidget spinner.

Don’t worry, the case does a lot more than be a gimmick. If you find yourself with dead buds, the case can get you another two hours of life on just a ten-minute charge. In total, Google claim you’ll get five hours battery life but I’ve clocked just under 4.5 on a single charge myself. With the case included, you can survive for up to 24-hours in the wild.

I’m not one to get bogged down in the details here because you probably don’t really care about the driver size of these buds and all that jazz. Instead, I’m just going to say they sound great. There’s no noise cancellation which you kind of get on the FreeBuds 3 but I was never really that impressed with that anyway. I adore the FreeBuds 3 but when it comes to sound, the Pixel Buds are right up there.

Even more surprising is the incredible call quality. I maintained the FreeBuds 3 managed to offer great call quality because the mic was just that little bit closer to your mouth. The Pixel Buds manages to get equal call quality with just a tiny in-ear bud. It’s quite remarkable. The tech behind it is impressive and it goes so far as to detect vibrations in your jawbone to improve quality. An incredible solution which overcomes issues with calls in windy spaces.

It’s worthwhile noting that there’s no EQ option with the buds. So tailoring sound to your own needs is really limited. I don’t believe for a second Google is targeting audiophiles with these and that’s really obvious when it comes to the lack of nerd settings. Adaptive Sound is another wink towards regular users as the buds themselves detect your surroundings and adjust volume levels accordingly.

Google Smarts In Your Ear

As with any Google product, you’re simply always going to get the best natural language interpretation on the market. Some, myself included, would say it’s scary good. As always, you’ll have Google Assistant on standby for you do say something like “Hey Google, play my favourite music in Spotify”. You can also wake your assistant with a long-touch on either bud. Note, you’ll need to have a device connected which supports Google Assistant.

Google has also started to push real-time translation more too. As a man with a German partner and as a man who’s tried to learn German for many many years, I need this technology to keep getting better. Unfortunately, Google is still overselling this “live translation” solution a little. I tried to have a conversation with my better half but it was still very stop-start, missing bits and pieces and ultimately, very unnatural. It needs to get to a point where it’s like there’s a person live translating conversations for me. I think we’re oddly close to it and Google producing buds this good, will only keep us moving in the right direction.

I’ve had an incredible number of buds come and go. They get tested and then find a home on “tech mountain” in my gaff never to be used again. The Huawei FreeBuds 3 were absolutely dominating the real estate space in my ear. that was until these buds landed. I’m not sure I’d admit they’re better than the FreeBuds 3 but Google’s Pixel Buds are certainly on par. Perhaps, they are for slightly different scenarios, but the fact the Pixel Buds are just so comfortable in my ears when wearing them means I’ll be reaching for them quite a bit in the coming months.

The Google Pixel Buds are now available to buy in Ireland from the Google Store and will set you back €199. If you’ve lost a bud or a case, they’re €70 to replace.