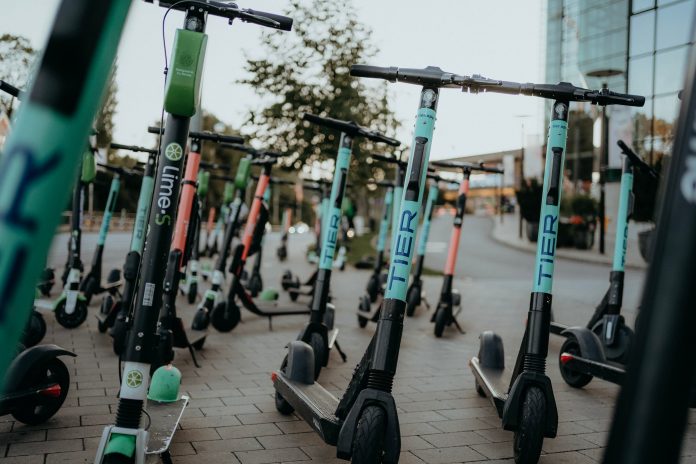 Ireland’s first electric scooter trial has kicked off in Dublin today. While the progress is welcome it’s a long way short of where we should be and at the launch, some completely oblivious comments from Minister Hildegarde Naughton just show how out of the loop the Irish government is.

Ireland’s first e-scooter trial will take place across the five campuses of Dubin City University. The trial sees scooter service operator TIER teaming up with technology partner LUNA and the Insight research team. For the trial, TIER has made a fleet of 30 electric scooters available. The cool thing is that these scooters will be fitted with advanced computer vision technology, allowing Insight researchers to explore a rich new source of smart-city data.

In an effort to allay fears over Irish city streets becoming littered with scooters, Luna technology installed on TIER e-scooters means the scooters are capable of running pedestrian detection and lane segmentation algorithms, allowing the vehicles to understand how many people are in their path, as well as preventing vehicles from being used on footpaths.

The pilot project, which launched today and will run until early 2022, will also explore other insights, particularly around user behaviours and attitudes, which can feed into any commercial shared e-scooter schemes that may be launched in Dublin and elsewhere across Ireland in the future.

The trial has lots of positives, not least of which will be massive safety benefits and benefits for vulnerable pedestrians. But at the same time, the outright legalisation of electric scooters in Ireland is taking an inordinate amount of time. Whether it’s a shared scooter lobby delaying private ownership or a nanny state gone wild, is impossible to know but at the heart is government mismanagement.

At the launch, Minister Hildegarde Naughton commented on the trial but seems completely out of the loop when it comes to how incredibly long it’s taking to legalise electric scooters in Ireland.

Speaking at the launch, the Minister said, “Ireland is truly leading the way in the space of the use of e-scooters and I very much look forward to seeing this pilot get moving across DCU campuses. This is an interesting and exciting time in transport – the innovation and momentum is palpable here today. It is my job now and the job of Government to play our part and progress the necessary legislation required for the safe use of e-scooters in Ireland. I look forward to seeing this pilot progress across campus and I am particularly interested in learning of its outcomes and insights which I am certain will inform us in further progressing legislation in this space”.

I try to focus on reporting the news instead of providing opinions but I can’t resist here. Since the days of Shane Ross, the government has been an opponent, not a supporter, of electric scooters. Despite calls since 2018 for the legalisation of electric scooters, riders have been treated as criminals in Ireland.

Ireland is a complete laggard when it comes to electric scooter usage. Most major European cities have implement scooter share systems and in recent times up to 93% of first-time users, become regular users. This is because, during a pandemic, people don’t want to be crammed into buses. Scooters provide a great alternative to public transport.

If you live in Dublin, you’ll see that the streets are full of electric scooter riders even though they could be stopped by Gardai at any moment. This is due to electric scooters technically being considered mechanically propelled vehicles, requiring tax, insurance and a license to operate. This is despite tax and insurance being impossible to acquire for these devices.

I’ve spoken with several riders who have been stopped by Gardai and have actually been stopped myself before I ceased using mine. Some scooters have been seized, while others have ended up in court and even risked getting penalty points, fines or losing their license. Earlier this year at Ennis District Court, Judge Sandra Murphy convicted Michal Blwlus for not having insurance when riding his e-scooter on a footpath in Ennis during the first lockdown in 2020. Sure, he shouldn’t have been on the footpath, I agree with that. But the conviction for not having insurance along with his scooter actually being destroyed is excessive but somewhat typical of these cases.

So, yes. The Irish scooter technology industry is booming, but we’re exporting the benefits. There have been far more ambitious trials in the UK, taking place in public spaces where Irish operators have been able to properly test and learn.

This trial is positive. The technology is impressive. But considering we have a Green Minister for Transport celebrating a Ryanair Boeing 737 connecting Dublin and Kerry as a win, promising electric scooters for months on end as part of the Programme for Government but offering no progress during a pandemic where they were sorely needed and now these comments from Minister Naughton, please forgive me for ranting just a little bit.

The reality is that thousands of electric scooter riders are at risk of losing their modes of transport while facing fines every day. Anyone in Government who celebrates the reality that Ireland is a complete laggard in this space doesn’t get congratulations from me.