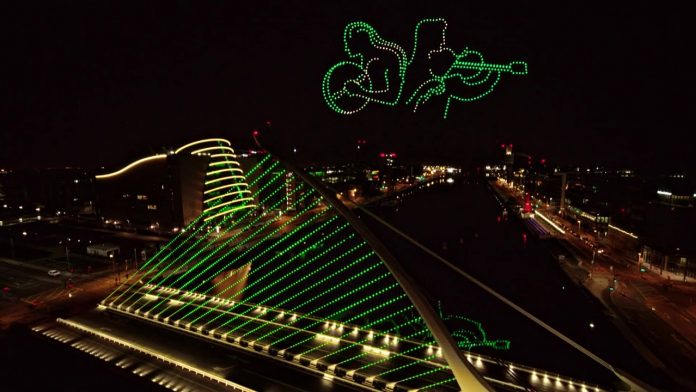 I love a good drone show. Probably one of the most impressive was following Biden’s victory in the US Presidential Race towards the end of last year. As we were coming to terms with the fact there’s no flatbeds and tractors pulling awful floats up the road, the St. Patrick’s Day Festival organisers, along with Tourism Ireland and Dublin City Council were organising a drone show. Yes! To celebrate our national day, we got a massive drone show and no one was told about it. Rightly so to be honest.

Here’s the video in full, provided courtesy of Tourism Ireland.

How Was The Paddy’s Day Drone Video Shot?

Drone shows are growing in popularity for many reasons. They are breathtaking to watch, of course, but they’re also more environmentally friendly that loads of explosives going off. Not to mention what that does to pets. For this video, over 500 drones lit up to Dublin night sky. The drones are controlled from a central computer and programmed to fly synchronised routes. The result is stunning mid-air graphics, animations and sentences.

From chatting to a few people, it seems the recording of the drone show was kept quiet. The correct decision as bored Dubliners would have loved nothing more than to crowd around the Samuel Beckett Bridge. By the looks of the video, and by how exceptionally quiet the streets are, even in Covid-19 times, I’m wager this was filmed in the wee hours of the morning.

Cool though, eh? If you’re looking for some more Irish stuff to pass the day, check out what Netflix has to offer.