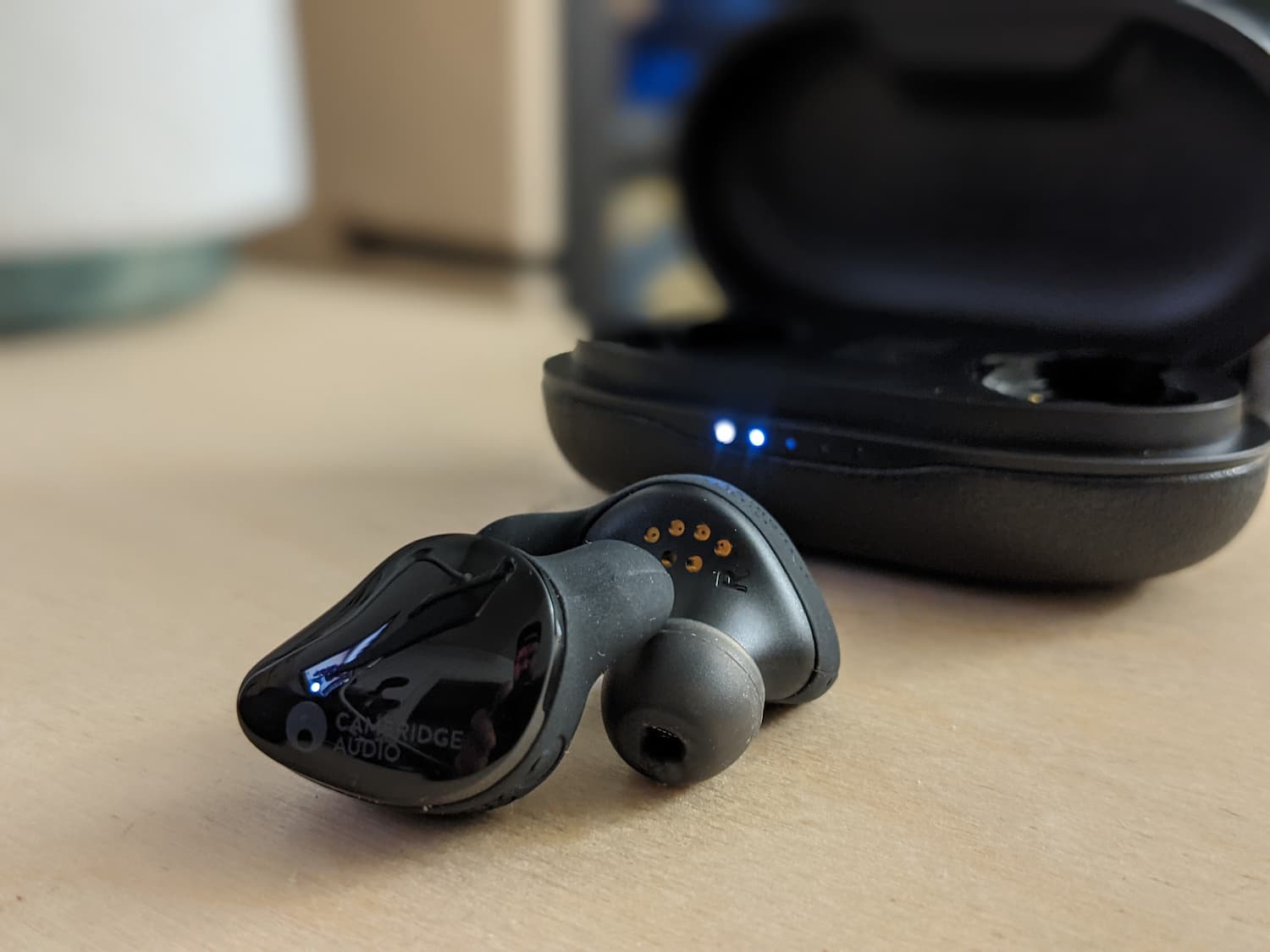 During the middle of lockdown, where we had to behave but were allowed travel the country and go shopping, I went to Kildare Village. Working at home had left me short on sweatpants so I popped into Under Armour to pick up some bits and pieces. The guy behind the counter was horrified to hear I was buying fitness clothing to sit at my desk. I couldn’t have cared less. Buying the right products for the right usage is always the right thing to do. Cambridge Audio sent over a pair of their new Melomania Touch true wireless earbuds and I love them. Sure enough, they’re great for listening to music but they’re also the best earbuds I’ve found for listening to stuff in bed.

Who Is Cambridge Audio?

Cambridge Audio is the kind of brand I can get along with. You know why? Because on their website they say that they, and I quote: “want to save the world from shit sound”. Now that, ladies and gentlemen is a mission statement. Lots of people listen to music on terrible audio equipment, whether it be headphones or earphones and Cambridge Audio wants to do something about that.

They started out building stereos and that craic, but they specialised in really high quality equipment. Today, they still produce high end Hi-Fi equipment with a modern spin. Now, this high end equipment isn’t cheap, but don’t let that scare you away from the new bits and pieces the company is working on; namely their ear buds.

The Melomania range from Cambridge Audio isn’t new. Last year they stormed onto the market with an impressive pair of “bullet” earbuds. Personally, design-wise, these weren’t for me, but the specs were mind blowing. Mind blowing is wee ear buds like that giving you a 9-hour battery life without using the charge case.

The Melomania Touch look to be more up my street in terms of design. Theirs specs look good too.

The Melomania Touch that I’ve been sent to test drive are stunning for many reasons. If you’ll indulge me, I’ll share those with you now.

Straight in, no kissing. Regardless of all the other things I like about these buds, if the sound was awful Cambridge Audio immediately failed. The good news is that the audio is great. Can they compete with fantastic over-ear headphones like my beloved Bose QC 35ii or the mightily impressive Huawei FreeBuds Studio? Alas, no they can’t. But these are right at the top of the list of the best in-ear buds I’ve tested. This is down to highly respectable audio quality along with great isolation and an app with an actually useful equaliser.

It’s important that I emphasise the point that the sound quality of these buds might not meet expectation if you look at them and think “oh, they look like stage monitors so that must be the target market”. There’s a bit of bleed between the mids and treble and the bass isn’t the most powerful on in the world. But I am being a complete earbud snob to be honest. 90% of music lovers will pop these in and realise their old earphone were crap and that’s enough for me.

Right, so they didn’t screw up the sound which means they’ve done a lot of the work. Far from home and dry though. As I mentioned, it’s impossible to ignore the likeness between these buds and professional stage monitors. I don’t for a second thing that’s an accident. The result is the Melomania looking pretty cool.

I’d argue that you look cooler than Justing Timberlake mainly because he felt the need to put his initials on his own monitors for Joe Biden’s inauguration. Note – these are not monitors from Cambridge Audio and this point is really just a vicious tangent.

Getting back to the Melomania Touch buds, the design is perfect. I’m guilty of often taking buds out and using them without trying the different bits and pieces because they usually just fit. However, these didn’t feel right at all. So I changed the bit that locks the buds into my ear. Just like that they were perfect. I couldn’t even feel the buds in my ears. I could completely forget about them. They’re nice and light, completely secure and I look just like Justin Timberlake.

Design Part Deux: The Best Buds To Sleep With

I’m looking at that headline and I know I should change it but let’s leave it.

I didn’t really know I was in the market for a pair of earbuds to wear while sleeping until I realised these were perfect. I like listening to podcasts about various things, including doomsday prepping. Purely for the laugh like. I don’t have an underground bunker. Yet.

But my better half often jokes that she knows more than I do because I fall asleep while she has to listen to it. Seems only fair I wear earbuds but have you ever tried to sleep with headphones or buds in? It’s a nightmare. At least it was until I tried these buds from Cambridge Audio. The security in the ear, the low profile design, all of it comes together to be the perfect pair of buds to sleep with. This remains true even if, like me, you’re a belly sleeper!

The people behind the design claim to have looked at data from 3000 pairs of ears in the design process in an effort to make the comfort factor next level. I don’t know if that specifically helped but these are crazy comfy buds.

Yes, they sound great but what else do you get for your money. Well, these earbuds, like their predecessors, pack in 9-hours of battery life which is just insane. I couldn’t imagine ever wearing any earbuds for that length of time, even as comfy as these are. But I like to know that if I really want to, I can. The charge case also holds power which means you get up to 50 hours of battery on the go.

I fell asleep with these buds in for about 7 hours one night and they were still going. Would they go the full 9 hours? Maybe. But if you have a real use for a 9-hour battery life, I want to hear about it.

The Melomania app doesn’t disappoint either. It’s showing off a modern design and lets you control plenty of audio features. Let more of your surroundings in for safety, use the equaliser to tune to your tastes or find your missing buds.

One thing I really like in the app is the ability to turn some of the touch controls on or off. Sorry, but for me touch gestures are usually awful and unintuitive. I really like the you can just turn everything off except pause so I know what tapping the bud will do.

It’s been a bit of a love in here, but I do have one complaint. The charge case doesn’t support wireless charging. This is a problem for me. I love when I travel somewhere and I just bring the one charger for my Pixel 5, knowing I can charge everything with reverse wireless charging. I’ll admit, this won’t impact many but we were near perfection here people.

I think you know it’s positive right? I was really impressed with these buds. The sound quality is great and the design is perfect. The lack of wireless charging is a small blip but then again, with battery life of 9 hours and up to 50 hours with the charge case you’ll likely never even experience this first world problem.

The added bonus here is if you’re looking for the best earbuds to wear while sleeping. I think there’s a market out there for this and these buds are the answer to that question. They’re a great pair of buds regardless but that’s a nice little niche for them to land into.

The Melomania Touch are available to buy now directly from Cambridge Audio for €140. Regards the whole Brexit thing, you can shop with ease because I’ve asked Cambridge Audio and they’ve said: