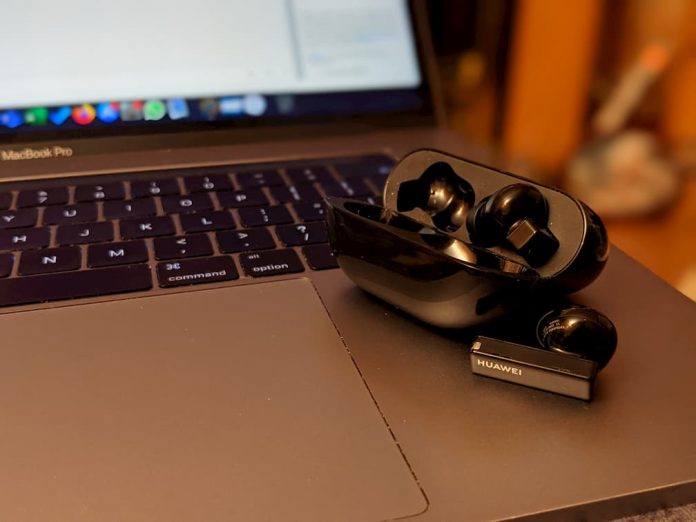 I’ve been writing about Huawei products for a few years now. It started out with phones, most recently the Huawei P40 Pro. More recently Huawei has shifted focus to accessories, namely wearables. I’m currently testing the impressive Huawei Watch GT2 Pro smartwatch and FreeBuds Pro earbuds. This particular review is the latter as I seek to determine whether or not you can trust a traditional smartphone manufacturer with creating a pair of earbuds claiming the “Pro” title.

Naturally, when you think Huawei you think smartphones. They’ve been making best-in-market smartphones for years now, taking the fight to the traditional giants Apple and Samsung. Huawei is also a massive manufacturer of accessories. While their watches are stunning, I personally think their audio equipment is more impressive. Why? Because of how high it punches. You might well be thinking that’s an odd thing to say given Huawei is one of the world’s biggest tech companies, but the audio market is one of the most competitive going. Yet, Huawei genuinely holds their ground here.

The FreeBuds 3i was Huawei’s entry-level earbuds. Wireless earbuds, for me, are the technology which has developed quickest in recent years and certainly the technology which has seen retail prices plummet fastest. Now, while earbuds can be bought for as little as €20, entry-level for me is anything under €100. The FreeBuds 3i went right up against the upper limit here, but the return for your money was far beyond anything else in the price range.

From call quality to the expeirence offered for music listeners, they are brilliant.

The FreeBuds 3 are astonishingly good earbuds. They didn’t sacrifice anything when it came to be a great pair of earbuds. I’ll admit, they more than borrowed a little bit of design from Apple AirPods but the result was somewhat better. The clever design meant incredible call quality and music playback. All of this supported by the impressive Kirin A1 chip. The noise-cancelling was a bit of a letdown, but I would argue if you really wanted noise cancelling you should be wearing over-ear headphones.

Still, the FreeBuds 3 has been my go-to earbuds for quite some time now. They have been replaced by the latest addition to the Huawei family; the FreeBuds Pro.

Huawei announced the FreeBuds Pro a couple of weeks back and I’ve been using them ever since. Despite, or perhaps because of, the world we’re living in at the moment I’ve had a wide range of opportunities to test out these buds and here’s what I think.

The fact I’m starting this review with noise-cancelling is somewhat remarkable. After being underwhelmed by the Active Noise Cancellation (ANC) offered by the FreeBuds 3, I didn’t hold much hope for the FreeBuds Pro either. Incredibly, Huawei has managed to produce a pair of in-ear ANC buds which stand toe to toe with my ever-present benchmark in the Bose QC 35 II.

Now, without travel abroad of any sort, I’ve lost my primary way of testing ANC. I usually have a few pairs of audio gadgets in my carry-on luggage when flying to test how they silence jet engines. Fortunately, my kitchen extractor fan is plenty loud and offers a similar noise to test the ANC properties of the FreeBuds Pro. Because these buds have silicon tips versus the FreeBuds 3 hardshell, they are capable of noise cancellation on-par with my over-ear headphones. I was genuinely taken aback by this because I never thought buds would get to this point, let along get there so quickly.

If you’re after ANC audio equipment and prefer in-ear to over-ear gear, the FreeBuds Pro is going to have to be top of the list when it comes to options. With on-board smarts designed to dynamically adjust noise cancellation based on your surroundings, these buds are a true workhorse when it comes to delivering you a high-quality audio experience.

There’s also a neat little feature which is quite the opposite to noise cancelling.

Being home in Kilkenny meant I was going for walks daily, walking my Mam’s dog. She’s a rescue dog and has a fair bit of anxiety when cars go by. I like taking calls or listening to podcasts from time to time when I walk but hearing a car or truck coming from behind is fairly important, so I can predict how the dog is about to react.

The FreeBuds Pro has a feature called awareness mode. It’s nothing that unusual and it has featured on earbuds before like the Jabra 65t Elite. But this feature just works really well on these Huawei buds. Sound quality remains impeccable while allowing you to be more aware of your surroundings. I think what impressed me is how it doesn’t sound like you’re listening to the environment around you through a microphone, which did feel unnatural when I tested similar features on other earbuds.

The buds also have Voice Mode which specifically lets you hear others speaking to you or around you.

Like the FreeBuds 3 that went before them, the call quality with the FreeBuds Pro is fantastic. Despite testing them in extremely windy situations, people I called while using the buds said they could hear me clearly. One person did point out that they could tell it wasn’t a normal phone to phone call, but not that this was necessarily negative. Between the smarts provided by the Kirin AI chip and hardware ranging from bone-conductive technology to wind-guards, there’s a lot of clever design packed in here.

The result is clear call quality and near-perfect communication. If you’re after a pair of earbuds that double up for phone calls, once again these are going to be at the top of the list.

With working from home they also have another ace up their sleeve for you.

I’m often sitting at my desk listening to music on my phone through my FreeBuds Pro earbuds while they’re also connected to my MacBook from a call on Zoom earlier. If I get another call on Zoom, the buds are clever enough to switch back to where they’re needed most. This is thanks to the buds’ ability to be simultaneously connected to two devices at once. What’s perhaps most surprising is that Huawei pointed out at launch that this feature will not only work with Huawei or Android devices but supports all major operating systems across a variety of device types.

It amuses me that this is one of the last things I get to in a review of earbuds. Maybe it’s silly so please do let me know if it is! One of the reasons I’m leaving it to last is because the FreeBuds 3 were so good for audio that I felt this would be awesome too. Sure enough, they are.

Tradition in tech reviews here is to harp on about bass, mids and treble but I steer clear and simply say the audio quality is even better than last years buds and I was mighty impressed by those. You’ll not want for much in listening to anything with these buds, from podcasts to rock music. They offer oomph where it’s needed but also crisp clarity. The only thing I think I can mention here that’s a negative is the lack of EQ control but I usually look at this, give it a few tweaks, don’t like what I’ve done and reset everything to default anyway.

While I can’t store the EQ thing under a column of negatives, there are a few things which trigger the old issue klaxxon.

First up is the plastic design. This doesn’t impact anything in terms of build or sound quality but it does, yet again, make the buds quite tough to get out of their charging case. This exact same issue occurred with the FreeBuds 3. Now, it doesn’t appear to be as bad this time around but I’ve managed to stop biting my nails in the past six months which I honestly think is making it easier!

While there’s not much else to say is “wrong” with the buds, the lack of an IP-rating would seem to be a natural evolution that Huawei can’t avoid much longer. It’s not something I particularly miss or worry about, but it does mean you can’t truly recommend the FreeBuds Pro as fitness earbuds.

To tie up some loose ends, I just want to look at the last few specs I’ve not mentioned yet. In terms of battery life, Huawei advertises that the FreeBuds Pro will hit 3.5 hours with ANC or 4.5 hours without. That’s actually on the money. Usually, these advertised values are inflated a bit but it’s pretty bang on. The battery case gives you an additional 15 hours of battery and also supports wireless charging. This is a handy addition when travelling if your phone has reverse wireless charging as supported by many phones these days.

These are a remarkable pair of earbuds and another indicator that Huawei is taking the non-phone products very seriously indeed. The FreeBuds Pro tick a variety of crucial boxes for me. While they miss a few “nice to have” bits, the overwhelming conclusion I reach with these buds is positive. They are easily one of the best audio products to hit the market in 2020.

If you want to buy the Huawei FreeBuds Pro in Ireland, they are available from Carphone Warehouse for €179 or Amazon.co.uk.

Are the Huawei FreeBuds Pro waterproof?

No. Huawei specifically states that these are amongst the earbuds not tested for submersion in water.

Will the FreeBuds Pro work with iPhone?

Yep! You won’t get every single feature available you do when paired with Huawei phones but they will generally work just fine. You can even connect them to two devices at once at they’ll automatically switch to where they’re needed.

Are the Huawei FreeBuds Pro good?

Absolutely. These could be one of the best audio accessories to hit the market in 2020. While they miss out on some features which would have easily handed them the title of “best in class” they certainly can stand toe to toe with the audio market leaders.