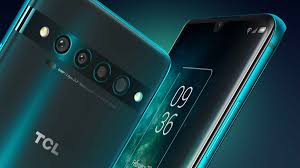 TCL have been making TV’s for years and they’ve been making phones for a long time too but under the Alcatel guise. At around €350 the TCL 10 Pro has entered the market just in time to showcase what they can do and with an OLED screen and some stellar design we reckon it won’t be long until we see some serious flagships from the brand hitting the shelves. The TCL 10 Pro is a fantastic debut, sure it ain’t perfect and it’s up against the Samsung Galaxy A51 and Google Pixel 4a for the pricepoint but if you want something that look far more expensive than it really is then take a good hard look at the TCL 10 Pro. Let’s get stuck into the review.

The TCL 10 Pro hit Irish stores in May and at €350-400 its some phone for the price. With some good 128gb expandable storage, two sexy colours in grey and the green (the one I got hold of) and 6GB RAM you will be hard pressed to find something with the bang for the buck that the TCL 10 Pro.

The TCL 10 Pro is available from all Irish networks.

This is the part of the article I’m really going to bang on about and to be honest it’s probably the most sellable aspect of the phone because the TCL 10 Pro is a bloody stunning phone, not even for the price, just in general and its probably the nicest looking phone in the sub €400 category. It’s been a long time since I’ve opened a phone box and been like oh it’s not just another black rectangle but with the colours and curves aplenty it was really a wow moment.

Here’s the thing this is most expensive phone in the TCL range so I guess you could class it as their flagship and you can really tell the care that went into making something that while not priced like a flagship defiantly looks the part. Most phones at this price range are typically watered down versions of the brands flagships so naturally the first thing to go is the design and material quality. Like the Pixel and Galaxy are both plastic shells wheras this is not.

The TCL 10 Pro is a wonderful metal body with this matte glass that is not so disimilar to the OnePlus styling, it’s also got a full screen design and lovely curved edges on said screen, as I said something that really well stands out at this price point. You can quote me on this, the TCL 10 Pro is the best designed and best looking phone for sub €400 bar none.

On the back of the phone we get the quad camera set up with the flash and rather than in a block its a horizontal strip that breaks up the glass spine. Yeah look it’s not perfect I said that before and where it’s let down is the one speaker on this phone, and it’s on the bottom right, meaning sound can get easily muffled as you’re playing games. There’s also no IP-rated water resistance or wireless charging on board here, though those aren’t surprising omissions in this price point.

For the price point it’s a nice camera. That’s it review done, we can all go home. Of course I jest, but in fairness to the TCL 10 Pro a quad lens setup at this pricing, is very nice indeed.

So the lens are firstly the 64mp primary shooter coupled with a 16mp ultrawide lens, 5mp macro and 2mp low light shot taker. See what I mean that’s some serious firepower for under €400, and then on the front we get a nice 24mp which in fairness is more than what you would normally get for a selfie cam.

Here’s the kicker though, the TCL 10 Pro main lens is set up in such away to allow max light hit the sensor and the result is a pic that shoots more like a 12mp rather than 64mp. Still a decent quality but the likes of the Pixel 4a and the Galaxy just edge things when it comes to quality output.

We do also get a feature called Super Night Mode which as you might have guessed is made to take night time pictures. Again look here’s the thing the shots are more than acceptable but when you compare it to the Google’s Night SIght you will see the difference. Granted the 4 or 4a are glorified flagships or a screamlined midranger rather than an out and out mid price phone so this should come as no major shock.

The TCL 10 Pro’s selfie performance is probably its biggest letdown. Shots from a 24mp camera should come out better and it seems the setup output makes things look more like what you would expect from a midrange phone, even if the specsheet reads better. There are worse on the market, far worse, there are also a few better so it’s really one of them take the good with the bad kind of things.

Under the hood in the TCL 10 Pro we get the Qualcomm Snapdragon 675 process and 6gb of RAM. This is probably the next best powered phone in this price range outside of the iPhone SE, which of course being an Apple product is an exception to the rule for pretty much any price range.

The TCL 10 Pro is more than powerful enough to run fluidity as long as you are not a big gamer but another big move from TCL is the introduction to their very own UI that runs over the Android 10 system. Not unlike any other own brand Android skins, TCL does things slightly its own way for both the good and the bad. One half of you will look at it and say right there are some kinda generic icons and it’s not the sharpest design but there are some little tricks in the locker that will make you stay the course. For example, there is this cool little feature that when you press the volume key when watching something you get a playback control system showing below the volume slider icon. Small but cool little feature which id fair handy.

TCL promises at least one major Android version upgrade for the 10 Pro, which isn’t encouraging but also, unfortunately, is the status quo for cheap Android phones. Google supports all its Pixel devices with three years of updates while Galaxy’s are much the same.

With the 4,500 mAh battery you should get a full days charge and is completely comparable to any of the other handsets in its competition. The TCL 10 Pro also comes with an 18 Watt fast charger that should get you about 50% juice in 30 minutes. To be honest that’s not lighting fast but its more than enough to give you a quick boost on the go.

Well, this phone for this sub €400 price point is actually banging! I would say this and the Google Pixel 4a are the two standout contenders at this price range, and to be perfectly honest did anyone ever things a phone made by Alcatel would be able to do that?

Sure for me the Pixel just about edges it because of the integrated camera software but the TCL 10 Pro is sure not to steer you wrong. The device has a bit of everything, camera is good, battery is good and it’s bloody gorgeous with a style that wouldn’t be amiss on some of the big flagship phones on the market. Put it like this if you were looking at the Galaxy A51, I personally would pick this all day long. Some achievement for a brand looking to establish its credentials on the market before the come launching the heavy hitting flagships in the next year or two.

The TCL 10 Pro standout against the competitors with it’s superior design that gives you that bit of wow factor and under the hood you got enough of everything to make you feel like you’re rocking a flagship even though it isn’t. Watch this space I’ve a feeling these guys are here to stay.