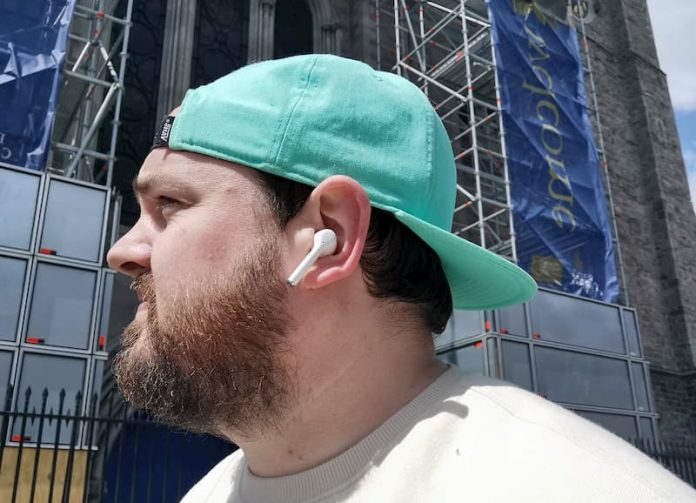 I was a driven anti-AirPod guy. I was against everything they stood for. The death of the headphone jack, the commercial monster that is Apple and the style of them. Everything irked me. Then, I realised it was time to say goodbye to the headphone jack. Apple actually builds some pretty great products. And the design of AirPods means pretty damn good call quality. By now I’m sure you’ll know I’m starting to live within the Huawei eco-system and have been testing out the Huawei Watch GT 2e and the Huawei FreeBud 3i. This review is the second half of this combo.

My absolute favourite earbuds right now are the Huawei FreeBuds 3. I adore them and they’ve set the bar for earbuds really high for me. They’re lightweight, comfortable, sound great but also offer fantastic call quality. This last point has become more important than ever as I work from home and have a lot of meetings I use these for. In terms of design, I can’t deny that it looks like Huawei has taken the lead from Apple here. I mean, look at them.

So the natural comparison for the Huawei FreeBuds 3i is their bigger brother. The FreeBuds 3i to depart considerably from the earlier model. The FreeBuds 3i move away from the hardshell plastic earbud and adopt a silicon bud to fit your ear more snugly. The result is even more comfort and less noise leaking in from your surroundings. The silicon earbud also gives you a bit more confidence when running with the FreeBuds 3i. It just feels more secure.

For those of you who absolutely don’t want to be seen wearing AirPods, these new buds from Huawei are far enough removed to ensure you don’t get mistaken as an Apple fan. Honestly Apple fans, that’s a thing.

Also deserving of a mention is the charging case. Instead of the Babybel style case of the FreeBuds 3 you now get a coffin case for your buds. This means the buds are easier to grab from the case and it fits a little easier in the pocket. It’s a bit more standard if that’s a good thing.

One element of the design that gets lost with these new buds is the mic cover. The FreeBuds 3 have stunning call quality even in some pretty hefty winds. This is largely down to a clever little cover on the end of the bud. While this doesn’t feature on the FreeBuds 3i, call quality is still brilliant in windy situations.

I can’t really fault the Huawei FreeBuds 3i anywhere when it comes to functionality. They’ve worked brilliantly for as long as I’ve had them. I’ve paired them with several devices from the Huawei P40 Pro and Google Pixel 4 to my MacBook and they’ve performed perfectly fine. What changes between devices is how much functionality you get to enjoy. For example, the auto-pause functionality doesn’t work unless you have an EMUI 10 device. As is the case with most devices of this nature, you get the most out of them when you use them within their eco-system.

I experienced some connectivity issues, but all is resolved with a firmware update. We’re in the realm of really pay attention to updates here people.

The FreeBuds 3i, like their bigger brother, offers Active Noise Cancelling. The great news is that while this was ok on the earlier earbuds, the silicon buds make improves the noise-cancelling even more. I’ve devised a test at home in isolation which I’m so proud of for judging just how good headphones and earbuds are when it comes to noise cancelling. The extractor fan over the cooker makes a decent substitute for a jet engine.

In my test, I stood with my back to the cooker and turned on the extractor fan. Using the Bose 35 QCII as my noise-cancelling base, I cycled through the three sets of head and earphones. To my surprise, the FreeBuds 3i wasn’t just better than the FreeBuds 3, but they were actually just a fraction shy of being on par with the much bigger and much pricer Bose cans. That’s some serious noise cancelling from a pair of €99 earbuds. Yeah, I know. I’ll come back to that price later.

The touch controls on the FreeBuds 3i is more important for me because my main use for these buds is listening to music while running. The controls work, but they are a little finicky. Long press to enable or disable ANC, double-tap to pause or play. Straight forward, but I feel some additional functionality could be included with a single tap. Left to go back and right to go forward a track perhaps?

I was a little disappointed to see the Kirin A1 chip doesn’t feature in these buds. That’s because everything that chip has touched has been amazing. The Kirin A1 chip is awesome for battery life and noise cancelling processing. However, both of these features remain brilliant on the FreeBuds 3i. That means leaving the chip out saves money but apparently has had little or no impact on quality. The battery on these buds is definitely better than the FreeBuds 3 which struggle to hit their advertised 3 hours.

The FreeBuds 3i advertise 3.5 hours and I’ve had them running 3 hours pretty comfortably. Always take advertised battery lives with a pinch of salt. This is because they test them in perfect circumstances.

Flagship Huawei phones like the P40 Pro support reverse wireless charging. The Huawei FreeBuds 3i do not have a wireless charging case. I’m telling you this so you don’t have the awkward three minutes I had trying to position the case to charge on the back of my phone.

Why do I always leave this until last? It’s honestly not a suspense thing. I just find the audio the most boring part of this. Sorry.

It’s hard to not compare the FreeBuds 3i to my own buds that I love. On their own, the FreeBuds 3i are mighty. They’re not quite as loud as the bigger brother, largely down to the smaller driver. They FreeBuds 3i also give off a little bit more false bass to me. This could be down to the lack of a bass tube with software trying to overcome hardware all the while overcompensating for the lack of the Kirin A1 too.

Being totally honest, I’m more fawning over the incredible quality of the FreeBud 3 than I am any shortcomings of the new FreeBuds 3i. I need to point out that price again. For the price, these are remarkable buds. Heck, forget the price. You should normally expect to pay a lot more for this quality.

Huawei FreeBuds 3i: The Verdict

Let’s face it. If you’re a complete audiophile, you’re going to be picking a brand dedicated to audio. If you’re an iPhone user, I’d wager you’re more likely to fork out the extra dough for Apple AirPods to stay in the Apple eco-system. But if you’re an Android phone owner, and especially if you’re a Huawei phone owner, in the market for buds, these are a no brainer.

For just €99 from Three, these buds are really punching above their weight.

Where can I buy the Huawei FreeBuds 3i?

You can buy these ear buds from Three Ireland.

How much do the FreeBuds 3i cost?

The Huawei FreeBuds 3i cost just €99.

If you are looking for the real heavy-hitting alternative to Apple AirPods and love pristine sound quality, you might see the value in shelling out for a pair of Huawei FreeBuds 3. But, at just €99, the FreeBuds 3i will tick nearly every box and far exceed expectations for many.

Do the Huawei FreeBuds 3i have Active Noise Cancellation?

Yes. Not only do the FreeBuds 3i have ANC but we’ve tested it against some of the best in the business and it’s extremely impressive for an in-ear bud.