Last year, An Post scored some PR points by delivering a package to an island off the Mayo coast by drone. It was cool, but it did feel like a bit of a PR stunt. Like, we haven’t seen An Post deliver anything else by drone since have we? Drone delivery as a gimmick is about to make a dramatic departure from Ireland. Later this year, Flipdish and Manna.aero are teaming up to deliver your dinner to you by drone in Dublin.

No seriously. By the end of the year, you’ll be able to order a takeaway and have it delivered by air. You can’t spell doner without drone.

How Drone Delivery Will Work In Dublin

The idea is actually quite simple. You visit the website or app of your favourite local takeaway. You order online as you would normally, but when selecting delivery options, the choice of ‘drone delivery’ will appear. A drone that’s been parked up at the restaurant is loaded up with your order and starts it’s automated journey. 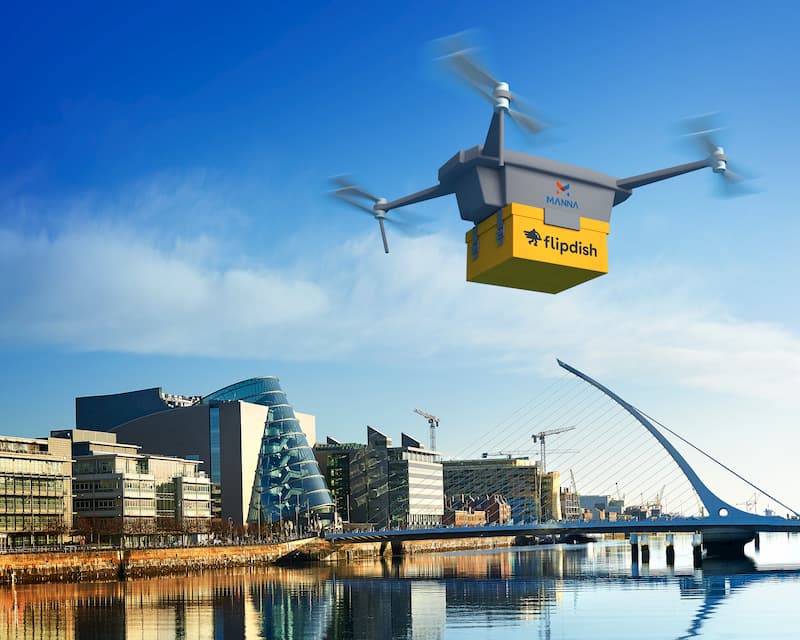 The service promised three-minute delivery time, made possible because drones don’t get caught in traffic. Instead, your dinner will whizz across Dublin City at 80kmph between a height between 100ft and 300 ft. Flying as the crow flies, your food will arrive piping hot, within three minutes of being loaded onto the Manna.aero drone.

My first reaction here was along the likes of what your’s likely is. “Sure. Yeah, right. I’ll believe this when pigs fly”. Well, pulled pork is closer to flying that you might think and after speaking with Bobby Healy, CEO at drone company Manna.aero, I’ve been completely won over by just how real this is getting.

“You can’t buy a DJI drone off the shelf and attach a bag of chips”, Bobby whipped before describing the two-year journey he’s been on overseeing the making of science fiction into a 2019 reality. Owing to events like the Gatwick drone incident, drone legislation has become ironclad which means companies like Manna.aero know the exact rules they need to play in, and create their business accordingly. Google’s parent company Alphabet has skin in this game too, launching Wing in Helsinki later this month. A lot of this seemingly futuristic stuff is happening because of very strict laws.

The Irish Aviation Authority and wider European Union Aviation Safety Agency have made it very clear that airspace is open for commercialisation and is encouraging the creation of services like drone food delivery. But there are very high standards that companies must live up to. That’s why, right now, there are only Manna.aero and Wing playing in this space.

Manna.aero has created a drone which Bobby describes as “beautiful in its ugliness”. Their drones are not designed to win beauty contests but instead are designed to be safe. Designed by a team of engineers hailing from Airbus and the military, Manna.aero’s drones are built with one primary function – never hurt anyone. The secondary function is to deliver you piping hot dinner.

Food safety means one thing but drone food delivery safety is a different kettle of fish. Once Manna.aero and Flipdish restaurants start delivering dinners in Ireland, they’ll only be doing so to those in locations which are safe enough. For example, I’m on Patrick Street in Dublin. High buildings and very little open space, means I, like many city centre locations, won’t be able to avail of drone delivery. Instead, it’s home with gardens that have a takeaway within two kilometres that will be able to enjoy dinner by drone.

While environmental obstacles are one thing, these food delivery drones will also feature a raft of additional safety features. Should an engine fail, the drone would be fine to continue flying. In the event that all engines fail because someone pucked a hape of hurling balls at a drone, it would deploy one, or if needed two, parachutes before safely landing back down to the ground.

Bobby also pointed out that beyond safety, operations like this can only succeed once the public is happy that there’s no invasion of privacy taking place either. Manna.aero and Flipdish has set high standards in both areas to ensure the public can only see the benefits of drone delivery.

So why bother with all of this? Why should dinner by drone be anything more than a gimmick? There’s an almost endless list of reasons why delivering food by drone makes sense, but I’m going to pick out my favourites.

Delivering your dinner as the crow flies means Flipdish and Manna.aero can promise three-minute delivery. It’s a whopper promise to make, but it does make sense. Drones can fly above congestion at 80kmph, drawing a straight line between your local chipper and your home.

Delivering your dinner as the crow flies means Flipdish and Manna.aero can promise three-minute delivery

You either get your takeaway delivered by cyclists, motorcyclist or someone in a three-tonne car powered by petrol or diesel. For the cyclists; they’re pretty green although they can be putting their lives on the line from time to time depending on where they’re delivering to.

The others are destroying the environment by being on the road all night. Drones are electrically powered and are extremely green. Even the string they use to lower your food will be biodegradable!

Think Beyond The Pale

The really exciting bit is when you think big. Bigger than Dublin. I many rural towns, delivery simply isn’t an option. It wouldn’t pay a restaurant owner to have a delivery driver on standby. A drone is happy out to sit there and wait all night for just one order. This opens up food delivery to a whole range of locations that wouldn’t have had it in the past. In fact, Bobby of Manna.aero believes this will be the biggest long-term area of demand for this venture with Flipdish, claiming they’ll be able to cover delivery to 90% of the population outside of Dublin.

Rural areas will also have much more space to accept deliveries. Double win.

No. Seriously, this is really happening…

It’s a bit mad to think that chicken wings have one final flight left in them before they get eaten. It’s even more off the wall to write this article knowing that this partnership between Flipdish and Manna.aero plan to deliver between 1000 and 10,000 dinners in Dublin before the end of the year. It’s not a gimmick. It’s not flash in the pan. Dinner delivery by drone is coming and it’ll be happening later this year.

Still have questions about having your dinner slowly lowered into your garden from a height? Drop your questions in the comments section and we’ll grab you answers.