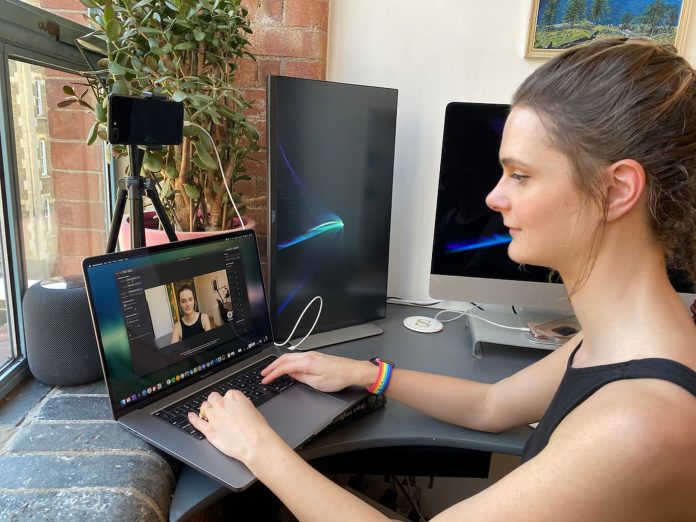 There’s a good chance you’ve found yourself asking more webcam-related questions lately. More than ever, we’re being seen by people through the lens of a laptop webcam. People have started looking into their setups, tweaking where they position their laptop and concentrating on their lighting to try get a better shot. There’s only so much you can do though given that the webcam is a part that doesn’t get much investment. Considering you’ve probably got a smartphone with a stunning camera in your pocket. Why not use that? If you’re living in the Apple ecosystem, here’s how you can use your iPhone as a webcam with your MacBook.

Why Use Your iPhone As A Webcam?

Laptop webcams are horrible. I hate them because, while you rarely use your webcam, they define the design of your laptop. Of course, many of us are using webcams a lot more since COVID made working from home the new normal. Once you’ve finished playing around as a potato on Zoom calls, you’ll probably want to improve your stream quality.

All the same, I’d still argue that your webcam shouldn’t define the design of your laptop. Some companies like Huawei has opted to hide your webcam in a button on the keyboard. This gives added security, reduces screen bezel sizes but does result in a horrendous “up nose” angle.

The obvious perfect solution is to have an external webcam that you plug in when you need it.

Dedicated webcams have been around from the PC days. The lack of innovation in this space is painful. With the exception of a Logitech C920 which is not impossible to find anywhere, webcams offer lacklustre camera quality in a world where average internet users have become accustomed to high quality.

Next stop. Using a DSLR as your webcam.

DSLR As A Webcam

Irish tech journalist, Adrian Weckler, has devised an impressive setup using his Canon DSLR as a webcam with a program called Ecamm. The resulting quality you get is incredible and after watching some of Adrian’s videos, you can see the benefits of the setup. It’s the same crisp satisfying quality you get watching an MKBHD video.

The catch here is that you need a DSLR and the Ecamm app, which alone costs €120. Together, this setup will likely set you back the guts of a grand.

An ideal solution would be to use what you’ve already got. Why not use your smartphone?

Using Your Smartphone As A Webcam

For me, I’ve always wondered why is it so hard to just use your smartphone as a webcam? When I look at the likes of my Huawei P40 Pro I’m left wondering why I can’t just use that? Right now, I’m using a MacBook as my day-to-day work. The Facetime camera is, while better than quite a few webcams, awful. My P40 Pro camera is best on the market but I can’t use it as a webcam. Why? Because between Apple, Android, Huawei and Microsoft, no one is that bothered about solving the solution.

Fortunately, someone is bothered. UK app developer Reincubate has just launched Camo which, while with some limits right now, can let you use an iPhone or iPad as a webcam for your MacBook.

Reincubate Camo Lets You Use Your iPhone As Webcam

Well, the heading there is a bit of a give away. Just hunted on Product Hunt is Camo from Reincubate.

Camo is specifically designed to give people an alternative to webcams and also needing to adopt an expensive DSLR set up to achieve high-quality video calls over Zoom, Teams and more.

The concept is really simple. First, you download the Camo program to your Mac and the app to your iPhone or iPad. Next up, you connect your phone or tablet to the MacBook with a cable and open both apps. Then, the next time you open up your video call app, you can choose “Reincubate Camo”.

Once you select Camo as your webcam, your video calling app will be showing your iPhone or iPad’s camera.

Within the Camo program on your MacBook, you’ll be able to select specifically which camera on your iPad or iPhone you want to use. For example, I was testing with my iPad and could choose between front-facing and rear camera. If you were to connect a iPhone 11 Pro and have the Premium version of Camo, you could choose from and of the four on-board lenses. Great if you need to get a whole meeting room in with a wide lens or focus on just you with a narrower one.

Here’s a comparison of my MacBook webcam camera versus the 8MP rear camera on my iPad. The screenshots were taken from a test Zoom call.

While the lighting where I tested this wasn’t great, what I want you to focus on here is purely the quality because you’ll need to play with your own lighting positions. The quality difference is clear. The MacBook’s native camera is washed out while the iPad, which doesn’t have a world-beating camera, is significantly better.

There are some obvious catches here.

The cable is a sizeable catch. By requiring a cable, positioning your iPhone or iPad can be tricky so you’ll need some sort of phone holder or a phone tripod. Also, if you’ve got yourself a MacBook without only USB-C ports, you’ll need a special cable like this USB-C to lightning cable from Spigen. The team behind Camo are also working on integrating with Windows in the near future which will also let you use Portrait mode.

The big point about Camo I’ve not mentioned yet is that it’s free. Limited to 720p and with a watermark in the corner. If you upgrade for little over €40 you’ll get some additional controls but for most the free version does plenty. While the cable does mean you need to think about your set up, it helps keep your laptop cool with all video processing happening on the phone instead.

When it comes to tech I’m always on the lookout for value and getting the most from what you have to deliver a better experience. The Camo app nails this. If you have a MacBook, an iPhone or iPad and a week full of video calls ahead, why not give it a go?