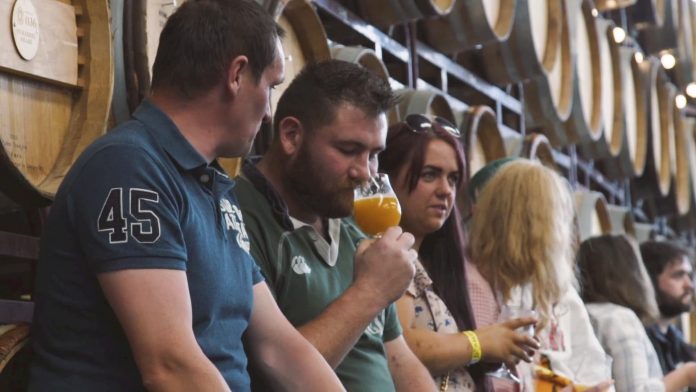 A couple of things have happened in isolation. I’m sporting a beardstache, I’ve forgotten how airports work and I’ve developed a taste for craft beer. To be honest, I had really developed a taste for craft beer before isolation hit and even started a website just to talk about beer. The cool thing about getting into craft beer in isolation is that I’ve been able to spend a bit of time getting used to the finer nuances of what makes a great beer and how to pair beers and food. It feels like an age ago, but as Zoom Pints, Zoom-bombing and all that jazz was getting popular, I stumbled upon a brewery in Sligo launching beer on social media. Next week, The White Hag will be hosting Ireland’s first online beer festival called Boxtravaganza.

When I came across The White Hag, they were launching a new beer they had brewed for St. Patrick’s Day. That was a whole lot of beer with no tap to go to. The lads running the brewery knew that should they not find a way to drum up a bit of interest in their new beer, it would end up down the drain. Now, I’ve sampled my fair share of beers from The White Hag and having their beer get chucked would be a sin.

Fortunately, their efforts worked and they’ve be hosting events and launching beers online regularly since. While some were left with nowhere to go, many Irish businesses had to make a choice recently. The choice was sink or swim? Some are gone but The White Hag is tipping along nicely because they’re willing to try new things.

And try new things they will.

Every year, in true Charlie and the Chocolate Factory style, the brewery doors are thrown open for Hagstravaganza. This is The White Hag’s annual birthday bash where up to 1500 people land into the brewery to sample a curated selection of the world’s finest beers all under one roof is Ballymote, Sligo. This COVID world that we find ourselves in doesn’t lend itself well to 1500 literally organising a piss-up in a brewery.

With that, Hagstravaganza was immediately in-doubt. It was St. Patrick’s Day all over again. But just like back then, The White Hag weren’t going to take this lying down. Just like that, Boxtravaganza was born.

The White Hag has described Boxtravaganza as “when the beer comes to you” instead of “when you come to the beer”. The concept is simple. You order your box of beer online, wait patiently for the postman to arrive and then wait patiently for the craic to kick off. That’s right! The lads will be streaming a day of White Hag birthday festivities straight from the brewery floor. To name but a few things, you’ll be able to enjoy comedy, music and beer tastings amongst other entertainment. You’ll also be sipping away on a curated selection of beers from that box your postie brought you. 24 beers handpicked from around the world now sitting in your fridge. Well, if you were lucky.

The Boxtravaganza Box sold out in little over a day. 500 boxes of beer flying globally from L.A. to Budapest done and dusted in just 24 hours. The good news is that you can still pick yourself up a Birthday Box with some of the best beers from The White Hag’s catalogue, including the limited edition Hopstravaganza.

On the day, everyone can join in the craic. Just check out The White Hag’s social media and subscribe to their YouTube channel for updates.