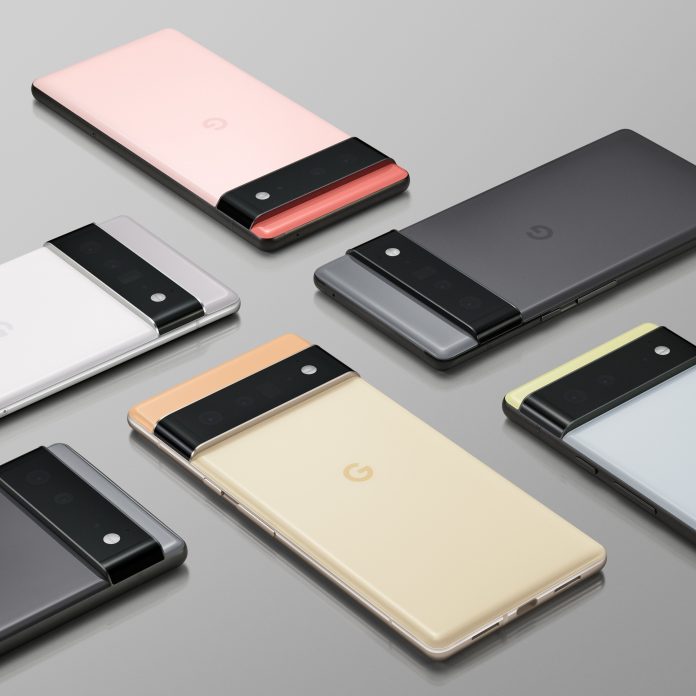 In fairness, you probably can’t even call this a leak anymore. Today on Twitter, Google released the latest info on their upcoming flagship smartphones which will replace the Pixel 5 series. Here’s what we’ve learned from Google’s inability or desire to keep a secret.

Both models will come in three colour combinations. Here you can see both models and all colour options. The phone with the bigger space above the camera bar is the Google Pixel 6 Pro.

Camera Will Be The Big Pro Difference

One of the standout design features on the Google Pixel 6 is the camera bar across the back. The camera will also be the big difference between Pixel 6 and Pixel 6 Pro. Naturally, that’ll likely be alongside screen size and battery capacity.

As is a new trend in a world where the supply of silicon is damn hard, Google has developed its own chip. This System on a Chip or SOC is called Tensor and Google has been working on it for about five years. It’s the first chip designed by Google specifically for Pixel phones. Moving to Tensor is a departure from using Qualcomm’s Snapdragon chips and Google plan to enable new AI-powered experiences previously not possible with Qualcomm.

Google also promises a “transformed experience” for the camera and speech recognition. The obvious area open for improvement here is Google Assistant, but Google Translate could be the sneaky winner of developments. At least I hope that’s the case, speaking as a man whose German has let him down on more than one occasion!

Finally, Tensor will also make phones more accessible. I spotted constant captioning as an option on my Pixel 5 and that’s going to be built upon too.

For years, Google has had a design philosophy at their core called Material Design. This is the reason everyone from Google looks the way it does, including apps developed more broadly for Android. It draws upon a wide range of features and design cues but is heavily user-experience focused and draws upon natural motions and mimics real-world objects to help users adopt hardware more naturally.

Now, Google wants to include you – the phone user – in the formula of how your phone works. Hence the name Material You. From Google’s own demos it looks like Material You will adapt your phone theme colours to the photos you take and the colours you pick. I’ll need to see this working in real-time to gauge how good it is. It’s definitely one of the fluffier inclusions from the leak today.

Pixel 6 Is Launching In The Autumn

If you were hoping for an exact launch date, I have to disappoint you. Google said their new phones would launch in the Fall. That’s Autumn for you and me. You can read through the full Pixel 6 leak thread from Google below.