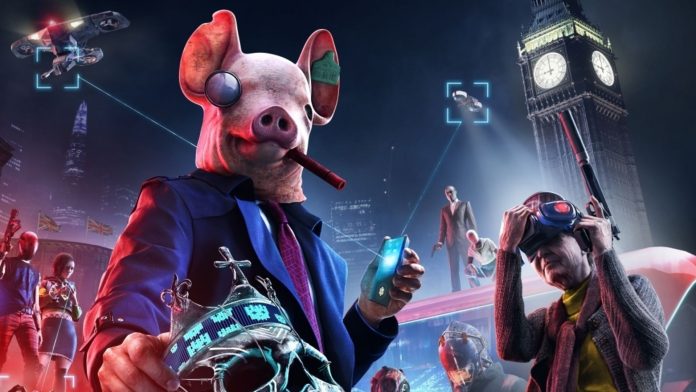 Watch Dogs Legion is a great game with a sneaky message, we have the power to rise up and fight against authoritarian governments when we need to do so. Ubisoft decided the way to send that message was to create a game without a hero. You can play as any one of nine million NPC’s (well not really NPC’s but you get me) to recruit them to your team of plucky hackers. The graphics of London are brilliant and the game play is simple and effective with some really cool missions to keep you glued to the screen and even more mad gadgets to whet your whistle for tech based chaos.

In this latest techy title Watch Dogs Legion takes us to the streets of a somewhat dystopian London taken over by Albion with organ harvesting, gulags, government monitoring and even self driving cars. So a mad world for a mad game but that adds to the fun and games.

Watch Dog’s Legion kicks off with you playing a mini tutorial while you play as the Kingsman/Bondesque superspy Dalton as you fight your way through the British Parliament to thwart some form of terrorist bombing. Sure because it’s a tutorial it’s about setting the tone for the overall story and you ultimately are unsuccessful, the hacker group Albion take over London leaving your beloved Decsec dead in the water. Now it’s up to you to rebuild the hacker group and take back London.

What’s funny is if anyone has watched Black Mirror, Watch Dogs is really giving off that vibe and with no main character you can bring anyone into play to overthrow the establishment.

This dark future which in places often feels somewhat close to the knuckle, is almost at odds with the gameplay loop and characterisation you’re being presented with.

Only a handful are technically skilled hackers as part of their character, most are street sweepers or delivery drivers and the like, but thanks to a phone with AI built in, hacking is a simple process.

If you can forgive that leap in logic, it’s a fairly unique idea and one that, for the most part, works out well. Recruiting certain high-level or unique team mates adds some interest.

After all, who wouldn’t want an Aston Martin driving spy on their team with the ability to tap their expensive watch and disable everything around them?

From reality TV stars to career hypnotists, there’s a plethora of characters and career sets. Each has their own unique pros and cons, some may have quicker hacking cool downs or earn more crypto currency from devices they fine.

While others might have prior wrap sheets meaning once caught will spend more time in jail or even just an awful case of the hiccups in high stress stealth situations, which isn’t ideal when infiltrating large compounds full of enemies.

Some are equipped with a uniform for their day job, allowing you to slip in to certain areas without avoiding suspicion, though you can’t let anyone make eye contact for too long or you’ll be caught out and all hell breaks loose.

I actually really enjoyed the story, granted it probably isn’t anything new age, ground breaking or eternally different but my god is it enjoyable with some really cool gadgets to keep you occupied. Basically bust through missions, side quests and rampage the streets of London to take back control from Albion a neferious hacker group. That’s really it for the story you’re DedSec the hacker group for good and you can recruit literally anyone you walk past in the streets to become a member of the crew to wrestle back control for the people. You’re painted as the team of underdogs but with a powerful leader you get all the tools, gadgets and level ups you need to hack into cameras, go undetected through security and smash the face off your opponents wether it be in bare knuckle boxing bouts or while working your way through an establishment to complete a mission.

It’s a bit like pretty much any game of this type, a lot of the missions are pretty similar but getting harder as you go through the stages. In Watch Dogs Legion your tasks are to infiltrate enemy stations, find evidence, take out targets and that kind of thing. With the gadgets at your disposal from cargo drones to spider bots you can get around places, do some stuff away from prying eyes before going into a base and getting your face blown off. All in all it’s pretty fun but some characters are limited so if you have perma death turned on and loose a teammate permanently you will need to find a new folk on the streets to take their place.

Not gonna lie my favourite character is the Dub I started with and his one liners had me chuckling away to myself as his language and demeanour doesn’t fit with the Cockneys and posh Londoners you generally will play with in this game.

Watch Dogs Legion is a stunning looking game and the London streets are slick and realistic in their look and feel. Sure enough it’s not a direct replica of London streets with certain aspects missing or moved to improve the flow and layout from a gaming perspective. Anyone who I’ve seen complaining about the lack of 100% street authentic should really get a grip, if a game was set in Dublin I’d hope they would take a bit of creative licence to make travelling a bit more logical, we might have a working Luas or see some electric scooters.

To be honest burning through the streets of London in a Double Decker flooring Albion recruits or using an Aston Martin to cruise the streets is a fucking cool little experience if you ask me. Look this game is built for the next gen consoles so there will be some some bugs, annoying yes, debilitating no.

Watch Dogs Legion is a cracking game, fair enough it’s not quite up to the last Watch Dogs San Francisco title, but I really enjoyed the story, graphics and the craic. London is huge and it’s a proper playground, some people don’t like the voice acting but it is authentically English and my first character happened to be from Dublin. With every single player in the game a playable character it really shows the imagination of the game, there doesn’t need to be a hero when everyone can be one.

I think the game is properly addictive and there is hours upon hours of gameplay, I still have a bit to go since I’ve jumped to Assassins Creed for review on that front but 1,000% i’ll be going back and finishing this one. These are the games that are going to be the big sellers this Christmas and that’s for sure.