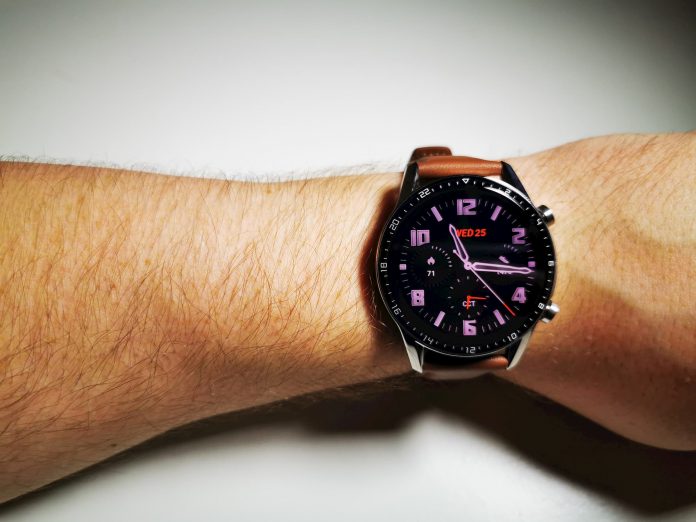 I’ve actually had every Huawei watch to date. It started with the first Huawei Watch. That was love at first sight. One of the first smartwatches to hit the market that actually looked like a watch. The Huawei Watch 2, which I bought for Google Pay, disappointed as Google never launched Google Pay in Ireland for wearables. Then, Huawei sent me the Huawei Watch GT. Another gorgeous watch marking Huawei’s departure from Google’s Wear OS with the Chinese manufacturer opting instead for their own Lite OS. And now, I’m wearing the Huawei Watch GT 2. I’ve been wearing it since Huawei launched the Mate 30 series in Munich and here’s what I think of it so far. 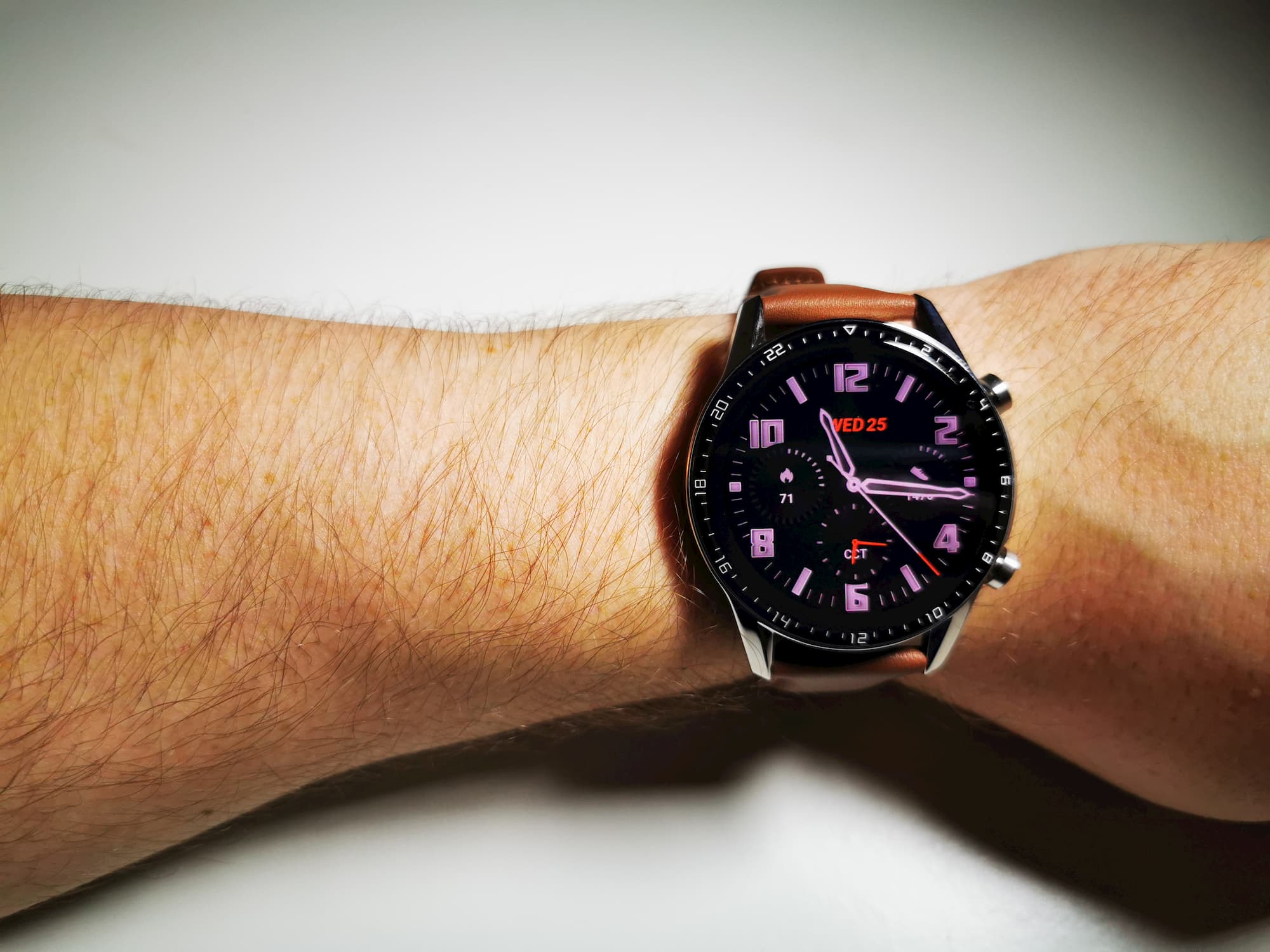 When it comes to wearables there’s plenty of items up for debate and I’m going to kick off with the design. I’m not going to lie, I’m starting with the Huawei Watch GT 2’s strongest feature here. This watch is gorgeous. Step away from this being a smartwatch and, in my opinion, you still have a lovely piece of kit.

This time around, I opted for the brown leather strap version of the watch which personally I believe to looks quite classy and professional. It looks equally good with a suit as it does with a t-shirt. The watches glass isn’t showing up any scratches even after two months worth of use. The screen isn’t sunk into the frame like the watches predecessor, leaving the glass flush with the frame. Once you get over the fear of not having that bezel to protect you, you’re left with a better-looking watch.

I was pleasantly surprised to find a silicon strap in the box too. Thanks to the quick-release system that Huawei Watches have used for the past few years, swapping back and forth between straps is simple. The benefit is that your business dress watch can quickly be turned into a sports watch. If the design is the Huawei Watch GT 2’s strongest feature, the sports tracking features is a close second.

I’m far from being an athlete, but I like to stay active. The Huawei Watch GT had previously impressed me so I was unsure what else Huawei could bring to the table in the latest wearable to join the Huawei family. 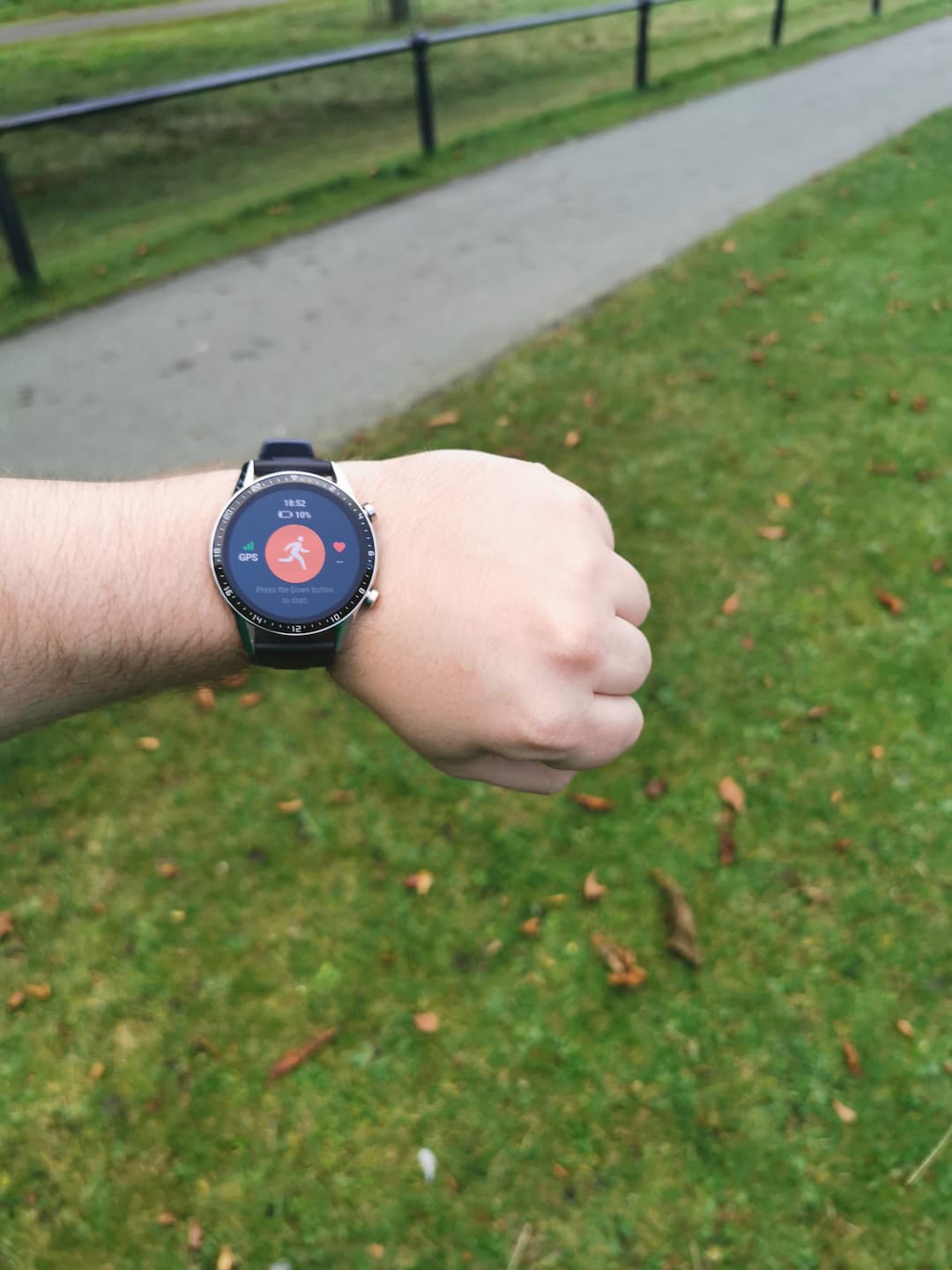 The Watch GT 2 still has built-in GPS and is water-resistant to 5 meters. This is significant as the watch lets you track lots of sports. Leave your phone at home and the watch can still track your runs with realtime heart rate monitoring, even when you’re swimming. If you’re doing triathlons, the watch is clever enough to keep up and change between disciplines.

The big step up for me with the Huawei Watch GT 2 is the personal trainer. This bit of software brings you through various programmes and helps you keep your heart rate in the right zone. Add to all of this Bluetooth connectivity and onboard memory for music and the silicon strap and you’re suddenly left with the perfect smartwatch for training. Why? Well, you can leave your phone at home, connect your headphones to the watch and then listen to music without any need for additional hardware weighing you down.

One feature which really suited me is the watch’s built-in speaker. I’ve been running with my better half who was able to hear our programme changes from my wrist. This is a much more practical use of the on-board speaker as I can’t see many people taking calls like a super spy – though that does work fine.

Actually, I probably need to go back on what I’ve said here. Maybe the battery is the real hero here. My pet hate with wearables over the years has almost certainly been battery lift. Charging tech every night just sucks. Phones, we can live with but that’s because they’re almost impossible to live without. Watches – well if that’s dead in the morning, it’ll just be left on the dresser.

Thankfully, there’s no such problem with the Huawei Watch GT 2. This thing has a whopper battery life, with Huawei promising up to two weeks of battery life on your wrist. I can confirm that you will get plenty of life from this wearable. In reality, given the level of tracking I’ve gone with, the watch usually gives me a week at the very least, usually with a handful of extra days on top. Plenty to leave you struggling to remember the last time you charged your watch when the low battery notification starts.

Because you’re using Lite OS there are certain limitations for the Huawei Watch GT 2. There’s no payments or support for any other third-party apps. You’ll get limited notification information and the likes, but listening to and controlling Spotify on your wrist isn’t going to happen any time soon.

Similarly, there are no maps services or similar either. You do get a limited range of Huawei-build apps within the Lite OS system. Apple made quite the big deal about having a compass and Huawei follows suit. A feature I felt would be useless until a recent trip to Seoul left me realising how handy having a compass can be.

Again, because this is Lite OS there are no third-party watch faces either. Huawei offers a fair few faces on the watch by default and these do cover a wide range of styles. I couldn’t see many left wanting for additional details on the Watch GT 2’s faces.

The Huawei Watch GT 2 will be coming to the Irish market soon and, rather unusually, Huawei has been quite vocal about this. I guess this makes sense as the Chinese manufacturer seeks to make up for some of the losses they’ve experienced in European markets given the whole Trump/Android fiasco. Huawei is also launching the Freebuds 3 this side of Christmas showing their willingness to start trying new things.

This is, in a weird way, good news. It’s good news because Huawei is forever creating great tech that we don’t always get to see. Huawei’s phone troubles have left them in search of other ways to tap into Western markets. This watch could very well be the watch which challenges the Apple Watch. If I’m being totally honest with myself, I think it’s the next rendition that will nail Apple Watch as Huawei does seem to be continuing to find their feet in the wearable market at the moment.

Regardless, this watch is packed full of features and functionality making it worthy of some serious consideration if you’re an Android phone user.

The Huawei Watch GT 2 will be available before Christmas and should retail for about €249. Check back here for updates.