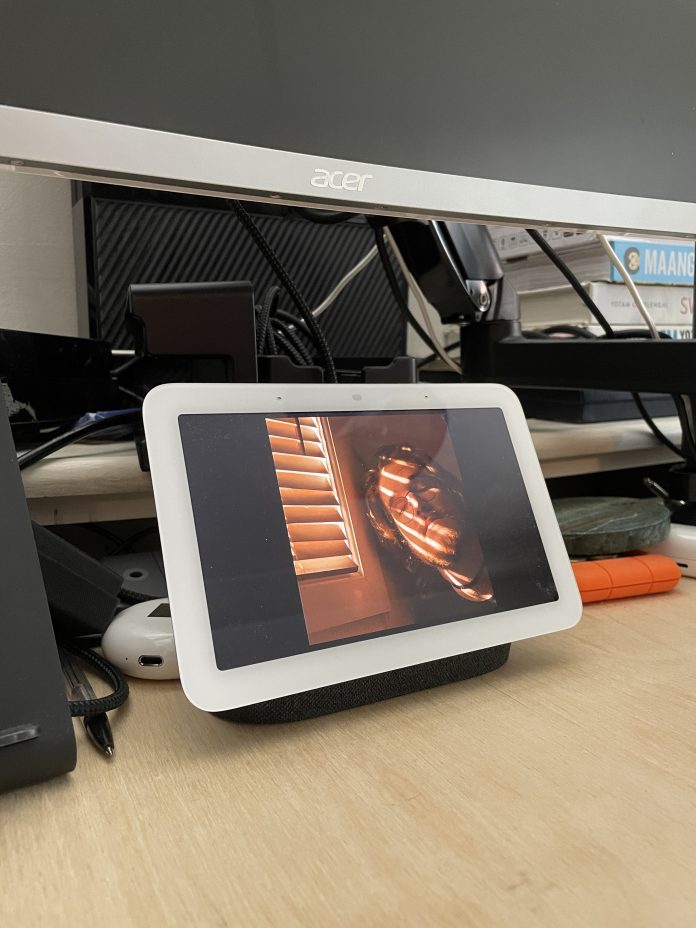 There are three kinds of household these days. You’ve either completely rejected smart accessories or gone down the route of picking Google or Alexa accessories. You could probably argue a few went all in on Siri and the likes, but they’re a minority. I personally went fairly full on into Alexa before finding Google’s Assistant-powered devices to be just a touch better. One of the key devices in my home setup is the second generation Google Nest Hub. So, if you’re thinking of investing, here’s what you need to know.

What Is Google Nest Hub?

The Google Nest Hub is a surprisingly affordable voice-controled Google Assistant with a 7-inch touchscreen display. Google has made the logical choice to brand all home-related products under the same “Nest” umbrella. The Google Nest Hub sits at the very centre of this eco-system, acting as your control panel for the lot.

I’ve actually got two Nest Hubs; first and second generation versions. I’ve got one in the kitchen and one on my desk where I work. I mainly use the one in the kitchen for streaming Netflix while washing up or setting timers when cooking. The one on my desk controls my smart lights and keeps me sane during the week, playing different kinds of music I need to keep myself motivated.

Based on my personal experience, is the Nest Hub worth buying?

The 7-inch display isn’t the biggest thing in the world, but it’s plenty big for binging the US Office while doing the dishes. Perhaps most surprising is the quality of the audio. It’s loud and clear despite being a very compact device. You can link your Nest Hub to the services you’d expect from Google. That’s YouTube, YouTube Music and the likes. You can also connect Netflix and Spotify amongst other services.

The Nest Hub will also appear in your Chromecast compatible devices when you try to Cast from another smart device. This is handy if you’re hopping from the big screen in the living room to the small screen in the kitchen.

If you do decide to go all in on a Google Assistant-powered eco-system and end up with a few speakers that support Google, you can also link them in the Home app. This is possibly one of my favourite features of them all. I can ask my assistant to “play The Scratch everywhere” and all speakers in all rooms will play the same music in perfect sync. If you’re having a bit of a spring clean and moving from room to room, this is an awesome feature.

Another main use for my Nest Hub is the smart home control side of things. Mainly, I’m controling smart lights but I’ve started recently testing out Google’s new Nest Camera and Nest Doorbell. More on that in a few weeks. For now, it’s mainly lights around my home. You can control your smart accessories with your voice or using the touchscreen on the Nest Hub. Honestly, I nearly never use the screen, mainly down to voice being a lot more intuitive.

I do, however, have to point out that the voice-control interface isn’t perfect. A common action I request is “Hey Google, turn off the lamp”. In response, I often get “Power controls are not supported”. The reason for this is that the Nest Hub hasn’t heard my request properly and thought I wanted to turn the hub off, not a lamp. A second, clearer command in a slightly more annoyed tone usually does the trick. This is such a common occurance that I cannot ignore it, but it doesn’t destroy the experience thankfully.

The bulk of this review is based on what you’ve read above. My reason for this is simple. In my very real-world experience, that’s what I’ve used the device for. The one exception being setting timers when I cook, which the device really is a game changer for, and the odd time getting a recipe. Sometimes, it’ll struggle with the latter because I’m picky with my recipes.

There are other features though that Google probably wants you to know about in case you might want to use them.

I thought Quick Gestures was going to be a big feature for me. When your playing music, a quick flick of your wrist to show the palm of your hand will pause playback. I used this on my desk but it was very sensitive. I was in the middle of a meeting and one gesture to my colleagues started Slipknot. Not ideal. It’s handy if you’re cooking and don’t want to use the touchscreen, but it’s not perfect.

I’ve not used this at all. Being honest, I don’t understand why Google integrated this into the Nest Hub. Probably not want Google want to see given this was a headline feature for the launch of the second generation Nest Hub.

Sleep Sensing uses radar to detect minor movements during the night to monitor your sleep health. That means no cameras to worry about.

This feature wasn’t all that important to me given that I usually wear my Fitbit Sense to bed which offers sleep tracking. It’s good to know there’s an alternative out there for those who find wearables distracting in bed. But if this feature is one that you believe is a game changer for you, I’d recommend reading another review that covers it in more depth.

As I mentioned, there’s no camera on the Nest Hub. That’s great for privacy but not so good if you wanted a device for video calling. Still, you can use Google Duo to call other Nest Hub devices or people with the Google Duo app installed. If you call someone with a camera, like someone using a smartphone, you’ll be able to see them but they won’t be able to see you. So if you were to buy one of these for an elderly family member, they could still see you even if you can’t see them.

Despite being a second generation device, the Nest Hub is still a lot of imperfect solutions to problems that most people probably don’t have. At the same time, there’s a lot of tech to be bought here for just €99. The sound quality is extremely impressive and the ability to link apps and daisy-chain devices means this is the modern core of home entertainment.

If you feel like you need a Nest Hub, you won’t regret the €99 outlay. If you feel confused by the device’s existence, it might not add much to your life that a simpler Google Nest Mini device would cover. Still, there’s just €30 in the difference and the Nest Hub offers so much more making it worthy of consideration as long as you’re in the market for a smart assistant at home.