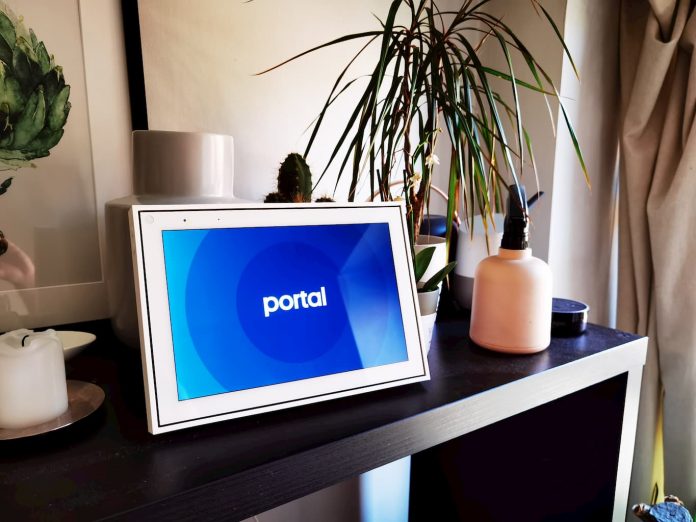 We’ve all been adapting to a new way of life. One of the things we’ve had to adapt is how we all stay connected. I’ve been testing out the Facebook Portal for the past few weeks when chatting with family. Here’s what you need to know about it.

Yesterday, I undertook a trip to do some essential work around the house for my cocooning mother. On the way, I had to stop off and pick up tools from my sister’s place. For the first time in months, I got to see my family in 3D. What was such a mundane thing a few months ago suddenly felt like that special occasion that brings the family together. The strange thing is that I didn’t feel like it had really been months since I saw everyone at all. The reason is simple. We’ve been seeing each other more than ever as a family thanks for Facebook Messenger calls.

Thanks to technology, staying connected with family over long distances has become easier these days. What we consider to be “long distances” has changed dramatically of course, whether it be 2km, 5km, 20km or within county lines. Regardless, technology has kept us all connected. Each family is different. Some are using phonecalls, others Zoom. Google Search data shows that WhatsApp video calling is the most popular of the lot, alongside Facebook Messenger.

I’ve taken some of these family calls on my phone and others on the Facebook Portal.

Facebook Portal is a range of communication solutions from Facebook. While Portal itself is a software solution, the main focus for this range is the hardware that houses the smarts. Of the four devices, all have screens with the exception of Portal TV which instead uses your TV as the screen.

I’ve been testing out the 10-inch Facebook Portal. This is the third in the image above. While it’s primary function is communication, the Portal also has some apps and games. Let’s break this whole thing down.

Tech is most clever when it’s designed to sit in a stylish home and not need to be hidden. For example, this is why Google Nest Wifi works so well. You don’t need to hide the modem and can let it sit where it provides the best signal.

Portal is styled to look like a typical picture frame. It can sit on a shelf and not look out of place at all. Dare I say, it may even complement to the stylings of your living room.

I also thing the power cable on the back is quite clever. It doubles as a stand and allows you to stand the Portal in both portrait or landscape mode. But if you want to talk about clever and cables, there’s no LAN option to wire this directly to your modem. Not that this caused a specific issue for me. You’ll just need to make sure where you’re installing this has the required wireless internet connection.

The primary function of Portal is to help connect you with friends and family through video chatting. To do this, Portal allows you to log into both your Facebook and WhatsApp account. Both of course are owned by Facebook. Once logged in, you can video call directly with friends and family one a one-to-one basis or through group calling.

It’s impossible to fault Portal for doing what’s it’s built to do fantastically well. The hardware is brilliant. The speaker is incredibly clear for both voice and music. The touch-screen display is crystal clear, though you will see quality drop if someone is on a slower internet connection. The 13MP camera offers a 114° field of view and thanks to onboard AI, the camera can zoom in on your face and track you as you move. Ok, I know that sounds creepy but for video calls, it’s really handy. I’ll come back to privacy later.

For additional functionality, Facebook has integrated Portal with Amazon Alexa. You get all the benefits of having an Echo device with a screen in your Portal. You can also link your Portal to popular services like Spotify and as I mentioned, the speaker is a whopper for batin’ tunes out.

The final bit of functionality I want to mention is the Portal as a photo frame. You can link up to your Facebook and Instagram profile and have your latest pictures display on your Portal. You can also display pictures uploaded to your Portal which aren’t on your Facebook.

I’m addressing this outside of functionality because this is what the whole idea of Portal hinges on. Facebook has a terrible track record when it comes to privacy. From Cambridge Analytica and Brexit to Trump’s election, Facebook as a platform has understandable privacy questions lingering over it. That’s apparent from how hard the Portal design team has laboured over bigging up the privacy features on this gadget.

Am I convinced? No.

I really like the Portal because it doubles as a display for your memories. But there’s no setting which allows you to keep these photos on all the time. Instead, you can on set your Portal to keep photos displaying as long as the device detects motion. If you have the Portal’s camera disabled for privacy reasons, you can’t keep the photos displaying. Is this a small thing? No. For me, this means functionality is hampered for those who opt for additional privacy. For me, that’s behavioural hacking by the Facebook design team. Here’s why.

They’ve designed this to be a communications device but also to be a photo frame. For all the calls you do, the vast majority of the time it’s going to be a photo frame. Unless you leave the camera open, the maximum time you’ll see photos is one hour. This is not privacy by design. At best, it’s bad design. At worst, it’s Facebook designers knowing exactly what they’re at, nudging users towards keeping the camera open. I would imagine, if questioned, Facebook would say this is a power consumption and environmental feature. But motion would keep the Portal on for a long time too so I’m not buying that.

The problem is, with Facebook’s track record you naturally lean towards the latter. It takes a lot to make me uneasy about my privacy. The Portal doesn’t make me feel uneasy because I can disable the camera. What makes me uneasy is that core functionality disappears if you do this. Another important privacy point. Portal will only work if you have a Facebook account to log in with. There’s no workaround for that. You turn it on and straight away you need to log in.

It was going pretty well wasn’t it. The Portal as an idea is great. Having a dedicated spot in the house for video calls harkens back to the days of the landline. The hardware is brilliant too. As I said earlier, for what it’s designed to do, Portal is fantastic. But Facebooks is shouting about Privacy by Design so loudly I just had to hold them to account on it.

This is privacy where it suits Facebook. I’ve got to assume there was a very clear decision made one day to remove an “Always On” option for displaying photos. I can’t shake that uneasy feeling that this was deliberate and not a decision made in the name of privacy.

I like the idea of Facebook Portal. I can still see some great applications too. I would love to pop one in my Mam’s sitting room once she was happy enough without privacy concerns. Having a pictures frame with memories of friends and family which turn into a live Portal to those same people, is a pretty cool idea. Rather predictably, the last word here is on privacy. While they tried, one decision ruined it.

The Portal I reviewed is available from Currys/PC World and costs €199. You can also pick it up from Amazon for a little bit cheaper but you’ll need to use a virtual UK address.

It’s a bit pricy for what it is and a cheaper alternative worth checking out is the Amazon Echo Show range. A family of Alexa app users can keep in touch using this. Not that Amazon is all that better with privacy issues!

No. I’ve tested this. If you want video calls it will need to be Facebook Messenger or WhatsApp. Zoom won’t work, even through the pre-installed browser.

Yes. Portal will work with anyone who is connected to Facebook and WhatsApp and in markets where you can access these platforms. That means restricted markets like China will need VPNs and other workarounds.

Nope! Once you pay the upfront cost, you’re up and running.

Not really. While there are some apps and a browser and it is touchscreen, it always needs to be plugged in. It’s a very specific device for specific uses.

No. I tested this using the Portal and my Echo Show and the Drop In command. The response I got was this device doesn’t not support Alexa calling.


Surprisingly no. Which is unfortunate given one of the best use cases for Portal is with elderly, less tech savvy, users.

That’s really down to your own personal needs. I found the 10-inch portal to be brilliant, but maybe a little bit on the big side for how much I used it. Then, for others, the Portal TV is the ideal solution. Everyone is different. Some won’t see the need for one of these at all.

The Amazon Alexa integration can be rather misleading with Portal. Despite Ring themselves saying it should work, many seem to have problems with the integration. I can’t confidently say it will work because there’s no official support.

Facebook Portal is available from Currys/PC World and Amazon.co.uk.