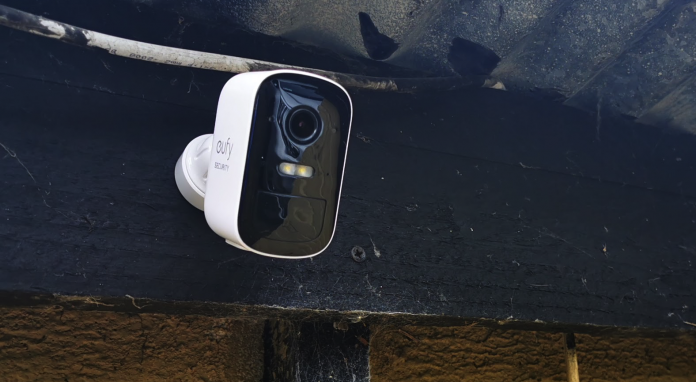 I’ve had a lot of jobs in my life. One of them is the hallmark job of a man who’s had a lot of jobs; door-to-door salesman. I sold house alarms, or as I would tell people “I’m selling peace of mind”. Yeah, I’m not proud of that chapter in my life, but it did give me quite a bit of knowledge about home security. Back then, monitored house alarms were all the rage. Today, technology has advanced to a point where you can monitor your own house alarms. Eufy Security is one such security system that I’ve been testing out. If you’re in the market for a great value home security system then this is for you.

Eufy is a sub-brand of the well-known Chinese gadget maker, Anker. I’m a massive fan of what Anker makes because the quality is extremely high while the prices remain notably competitive. I already have some Anker Soundcore audio accessories, phone chargers and a Eufy RoboVac and have to say I’m mighty impressed with the quality you get, even before you see the great value price tag.

When Eufy sent over their security system for me to review I was excited. I had first seen this system at an Anker launch event in New York so I was excited to see the real deal land in for testing. Now, there was no point installing this in my apartment so I instead opted to give it to my Mam. A great year to install a security system to keep an eye on things!

The basic Eufy security kit is the Eufy Cam 2C. This includes a HomeBase 2 and two cameras.

I’ll start with the HomeBase 2 even though there’s not a whole lot to talk about here. The HomeBase 2 sits in your home and is a required part of the system. By that I means you can’t just buy a camera and connect it to your WiFi. One big positive of the system when it comes to privacy is that it doesn’t rely on cloud storage. Instead, your HomeBase 2 module has a 16GB drive capable of storing up to three months of footage.

That’s of course depending on how much activity it captures.

If you have quite a large area you need to cover, you can daisy chain these home base modules together. This means if you have two HomeBase 2 units you can connect them to each other and expand the overall quality of your video streams. I actually had to do this to boost the signal to some external cameras. The vast majority of people won’t need to do this but it’s handy to know.

One final handy thing to note is that while it’s always best you connect the home base module to your home broadband with a cable, you can use WiFi if you need find the perfect spot for peak signal quality.

This is the really important part of the system: the camera. These cameras will be your eyes, ears and even voice when you’re away.

These particular cameras are capable of streaming 1080p HD video. There are also pro versions of the cameras which can stream 2K video. For our setup, 1080p was ideal because, you know…rural broadband.

Today, 1080p is widely considered to be the absolute minimum acceptable camera quality and I tend to agree with that. But that’s not to say these cameras are just acceptable quality. They’re great quality and that’s not just during the day either. At night, you can activate a small light or watch what’s going on with the built in night vision.

The quality of the cameras is actually rather important these days too. If the purpose of your camera is to identify someone in the event of a break in and the cameras actually aren’t clear enough, you could find yourself in some GDPR hotwater. The reason being if you’re recording video it has to be high enough quality to carry out the reason you’re recording. That’s absolutely not a problem for this Eufy system.

The smart part of this cameras kicks in when it comes to knowing when to send you an alert. The built in AI can tell the difference between a person walking around your garden and the neighbours cat calling in for a visit. This featured called “human detection” can be disabled you rather know about everything going on.

If your camera is setup facing a busy walkway or road, the camera has one final trick up its sleeve. You can set an activity zone for each individual camera. This means any movement outside the designated area of the cameras view will be ignored.

Probably the smartest part of the entire system is that all of these cameras are wireless. Installing the cameras took just a few minutes each with a handy sticker in the box providing a drilling guide. The vast majority of installations will just need an electric drill.

One in place, you can forget about these cameras for about three months thanks to built in batteries. Eufy advertises 180-day batteries but I’ve only really ever witnessed about three to four months of battery life in a cycle. That will vary on how often you check the cameras and their proximity to the HomeBase 2. When it’s time to charge, they’re nice and handy to screw off their mountings. Plug the camera in for five hours and you’re up and running again for another three months at least.

The cameras are also IP67 rated so they’re fine to sit outside in the Irish weather.

The wireless nature of the camera means they’re easy to install but also easy to add to. I’ve added a few extra cameras to the system and even a smart doorbell. I better talk about that actually.

I didn’t really want to the 2K version of Eufy’s smart doorbell but it was massively reduced on Black Friday so it seemed worthy upgrade to my Mam’s system.

The Eufy Doorbell features quite a few neat features that set it apart from the average doorbell. The built-in 2K camera means you can see who’s at your front door, whether they ring the bell or not. You can speak with them, tell them to leave the package because you’re on the way home or tell them that you’ll be gone for the day. Until you have a smart doorbell, you don’t realise how handy it is. For me it’s great to be able to know when there’s people around my home place. Peace of mind for everyone.

Fitting the doorbell was as easy as the rest of the kit. I think that’s actually the overarching theme of the entire system; ease of installation. You press the sync button on both the doorbell and the HomeBase 2 then two screws later your smart doorbell is fitted. It also comes with a nice angled plate which you can use to perfect the viewing angle of the camera.

The last hurrah of this system is an integration with Amazon Alexa. If you have something like an Amazon Echo Show, you’ll be able to not only hear when your door bell rings on your Echo device, but you’ll be able to see who’s at the door too. For me, this is very close to what I thought homes of the future would look like back in the nineties. You know, like Bill Gates’ gaff.

Is The Eufy Security System Any Good?

The price tag that comes with the Eufy Security system is a fraction of installed home alarm systems, particularly if they’re monitored. Even other similar systems on the market are more expensive. The Eufy system we now have in place leaves me wondering why you would need anything more?

The app is great and keeps be notified of everything going on around the system. It even sends screenshots of movements and people ringing the doorbell so I know if I need to jump in and chat with someone. Installation was remarkably easy. I had set aside a day to install everything and it was done in a few minutes.

You can expand the system beyond what I have too so I fail to really see any catches with the entire system. Sure, the batteries would be awesome if they lasted the full 180-days but three months is plenty in between charges too.

One of the biggest benefits of the system is that there is no reliance on the cloud. Competitor systems like Amazon Ring or Arlo require cloud storage and that means monthly subscriptions. Eufy’s Security system means you buy the system and you’re done.

I don’t like using terms like “flawless” when it comes to gadgets, but the Eufy Security system I’ve set up here really isn’t far off it. I love that you don’t tie yourself into a monthly subscription and that the quality of the cameras is extremely high. I wouldn’t have expected anything less from an Anker company to be honest. The modular nature of the system means it’s easy to get a base system and expand over time.

The alarm systems I used to sell would cost the guts of €1300 per year when you through in the cost of monitoring with the hardware. That’s nearly five times more than what a system like this would cost you and at the end of the day no-one will monitor your home better than yourself.

I’ve still got it.

You can start your own home Eufy Security kit from just €239.99 on Amazon.de.