This is what every company developing an app or skill for the likes of Amazon Echo or Google Assistant is focused on. The raw chicken moment is about finding the perfect moment in a person’s day where voice-controlled assistance is needed. You’re making dinner, cutting chicken and need to set a timer. “Alexa, set a ten-minute timer”. And there you have it. The raw chicken moment. Driving is another obvious example of this and I’ve been testing out the ROAV Viva which is effectively an Echo Dot in your car.

ROAV is the automotive element from one of my favourite brands; Anker. They are focused on bringing smart home tech into the car including dashcams, smart chargers and, as you might have guessed, voice controlled devices through the VIVA range.

Voice control is the most exciting in my eyes given the additional control over gadgets and communication this gives you in the car.

The ROAV Viva is both like and unlike traditional in-car phone chargers. In the ‘like’ pile, you get in-car charging by plugging a device into your cigarette lighter socket. The exciting stuff comes from the ‘unlike’ features.

Amazon Alexa: Like an Echo Dot in Your Car

The biggest feature of the ROAV Viva is the fact it’s powered by Amazon Alexa. Effectively, this means popping a ROAV Viva into your car is the same as having an Echo Dot in your motor. More on what that means for your driving experience later.

No surprise then that ROAV packs in some fast charging technology and two USB-out ports allow you to charge your phone. I’ve had in-car chargers in the past that only slow down your battery dying, so having a great in-car power source for my phone is fantastic. 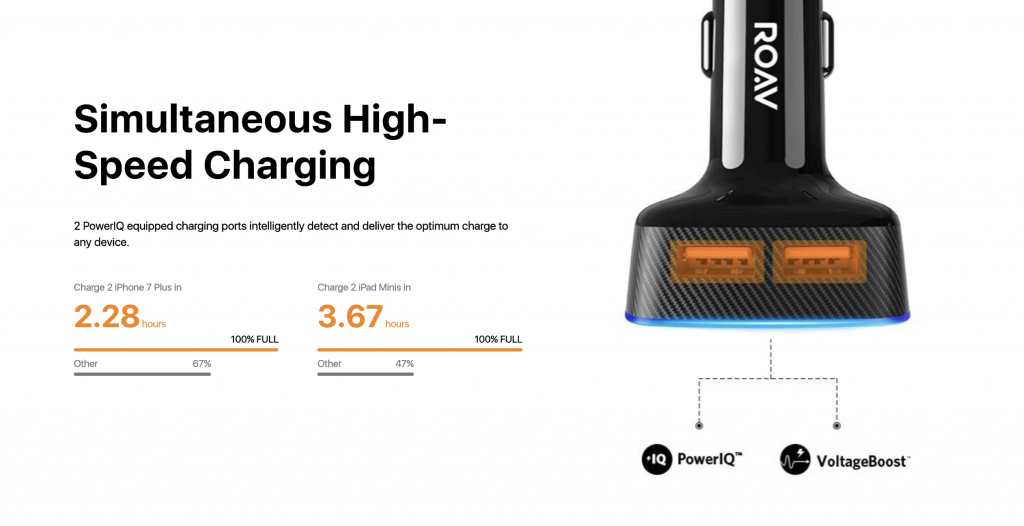 Modern cars are coming fitting with a range of great tech, including Apple CarPlay, voice control and Android Auto. Great if you want to fork out for a new car, but ROVA Viva Pro lets you add all this tech to a much older car. This is possible down to how versatile the device is. You can connect the Viva to your car through Bluetooth if your stereo supports it, AUX if it’s available and you have an AUX cable and even through a built-in FM transmitter if all else fails.

It’s important to note there are two devices: the ROAV Viva and ROAV Viva Pro. Both are very similar but the Viva Pro gives you the additional connection options of AUX and FM transmission.

Benefits of Having Something Like Echo Dot in the Car

What are the raw chicken moments you have in your car? Having something like an Echo Dot in your car thanks to the Viva Pro can overcome some common problems and enrich your in-car entertainment experience.

One of the most obvious benefits of Alexa in your car is making calls. the Viva Pro comes with the additional benefits of offering great call quality and noise cancellation. If you know other people with Amazon devices, you can also drop in on their Echo just like you would Echo to Echo.

Amazon Alexa supports TuneIn radio which features a wide range of radio stations from around the globe. Sure, you have a perfectly good radio in the car, but having a ROAV Viva means I can listen to local radio from Kilkenny in Dublin. It goes beyond that too. If you’re living in Ireland but come from abroad, having a Roav Viva means you can listen to your favourite radio stations from back home. I love this feature.

GPS navigation is another logical feature for when you’re in the car. If you’re driving along and need a route change, you can simply tell Alexa where you need to go and your phone will start navigating.

Once you have Alexa controls in the car, you also have the power to control other devices. Now, this is going to be a great feature in the States where nearly everyone, according to TV and Hollywood, has a garage with electric doors. In Ireland, there might be limited uses for these features. Like, I can control my smart lights in my gaff from the car now. Honestly, that’s pretty useless to me, but if you have an automatic gate or external lights at home, I could see connecting all these together being really useful.

Spotify: The One Catch

The only catch with the ROAV Viva and Viva Pro is that they don’t support Spotify yet. This wasn’t too big a problem for me because I’m an Amazon Prime member. I just swapped over to Amazon Prime Music. But if you don’t have that luxury, I could see you being a little let down by the lack of support for Spotify.

Surely it’s only a matter of time until ROAV gets Spotify onboard considering it’s on the average Echo Dot, so watch this space.

I love this thing. I’ve got both Amazon Alexa and Google Assistant devices in my home, so I’m already well versed in how to use smart assistants in my daily life. I don’t think you do need to have other Amazon Alexa devices to get the most out of the Viva or Viva Pro. These gadgets immediately transform your in-car experience to be much smarter.

The ROAV Viva is another brilliant gadget from Anker that can give you a lot in return for less than €100. As always, pop your questions in the comments or drop us a line on social.

Pick up the ROAV Viva Pro for around €60. I also recommend pairing this with a magnetic phone holder that I reviewed ages ago and is still going!