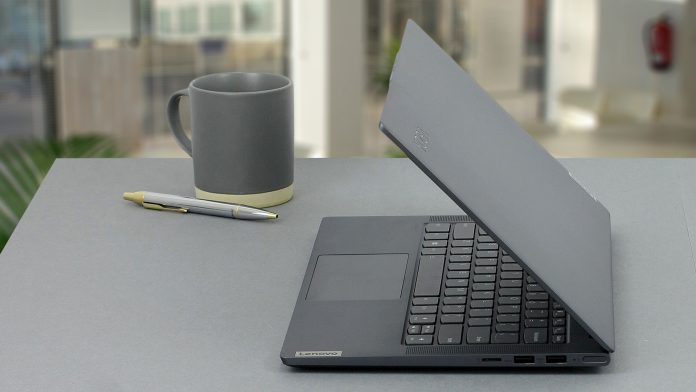 Not long ago I was testing not 1 but 2 different Lenovo laptops. We get to try out a bunch of tech in Goosed Tower but it’s not everyday we get a couple of high powered laptops landing on our desks to play with. Let me start with the Lenovo Yoga slim 7 retailing for about €900. Anyone who is on the lookout for a slim and lightweight laptop, the Lenovo Yoga slim series has always been high in the mind of the consumer due to reliable performance, portable design and reasonable pricing.

I was working with the Yoga Slim 7 14″ Core i5 model and I thought the best move for me was to use this for my standard WFH day to see how it stacked up.

I think we can all accept than when it came to slimline and sexy performance laptops, the MacBook has always been seen as the standard bearer. Windows generally have been bit bulkier, something which has been changing over the last couple of years but you can really see the inspiration in the Lenovo Yoga Slim 7. It’s shockingly light, the colours are lovely and at 14″ it handily fit into my schoolbag for a wander out the road without adding bulk.

We get an aluminium body with a plastic base, the bonnet as I’ll call it carried the logo and just the overall tactile feel is lovely, really adding a touch of style to what could otherwise be very boring. Around the body we get a very slim surface, the bare minimum space required to hold all the necessary ports where there are plenty:

That’s all the ports, because the Yoga Slim 7 is charged with USB C and onboard we get WI-FI 5 and Bluetooth 5.0. Pop the Yogo Slim 7 open and we come to the main bit of meat, the interior is slick, Qwerty keyboard with large buttons and backlighting with a rather large track pad. It’s large given the actual size of the laptop but you could say Lenovo know their audience here, its all about that work functionality.On the keyboard, the Yoga Slim as I mentioned has some big chunky buttons, its a design functionality that helps space out letters, add a bit of tactile feedback and reduce the chances of hitting the wrong key, minimising speed based errors.

We also get two large speakers sitting either side of the keypad that generate plenty sound, much louder than my more expensive HP Envy. The screen itself is full glass rather than plastic which might be a problem with scratches and the likes but again its lovely to look at. Above the display we get our HD webcam and some IR sensors that bring in a Face_ID which is a cool added feature. Not bad in a teeny machine that weighs just over a Kg.

The Lenovo Yoga Slim 7 just works. The Intel Core i5 processor is the perfect partner for your standard working tasks, this ain’t no design specialist laptop let me be clear here, but for documents, Microsoft Office, Google Sheets, standard applications and the internet browsers, you will have enough horsepower to get through your day.

As I said this is no high powered, super expensive performance machine, this is office work and standard entertainment, ideal for the vast majority of users if we are being totally honest. Right now writing this I have 33 tabs open, across 2 screens and the mini beast keeps ticking over not a bother on it. I will say it would be nice to have extra storage, personally 512GB just doesn’t cut the mustard in the long term.

Again this laptop at €800-900 is not trying to be a match for the MacBooks and Alienware’s of the world nor should anyone expect that, what you get is a more than solid performer at the price point and with the MX350 GPU you do get enough sauce to play some games like Football Manager 21 or even something a bit juicier like Fornite, but defo not a replacement for a gaming machine if that’s what you had in mind.

We also thought the IR based facial recognition was rather nifty, plop in front of the screen and on comes the sensors and camera to let you in, takes about a second or two an is safer and about as fast and using a Pin lock.

In terms of the display the Yoga Slim is a 14″ 1080p HD display, which is perfect for a working from home machine. Colours pop and regardless of whether you’re editing, scrolling YouTube or generally pottering around online, visuals won’t be a problem.

The Lenovo Yoga Slim 7 is sporting a battery that claims to give you 14 hours of juice from the 60.7Wh battery, this is never the case but I did get around 10, which is about what I would expect and you should easily clear a work day without having to reach for the charger. That’s also given the amount of usage I would have. At one point in time I had the following open in one work day, just to give you an idea of the power we got:

Basically I would be a heavy user and this was able to do everything I needed but I would still bring the charger with me going anywhere, just incase. But to be honest it takes about 40mins to get 50% of charge or just about an hour and half for a full charge which is more than acceptable.

Laptops generally cost bank, we all need them for these work from home lives so it’s no surprise they are some of the most expensive home items. Something like the Lenovo Yoga Slim 7 is going to more than do the job done, sure tis a tad more expensive than most what I would call standard work from home machines that retail about €600-700 but with the extra money you get better design, better battery, sound and display.. so all the key components. Oh and it looks really nice, the perfect all rounder laptop for the everyday user.