I’m a wearable user. That’s the only way I can describe myself because I’ve yet to find a wearable that passes the halfway test (more on that in a minute). I’ve had the original Pebble Smartwatch from Kickstarter, a watch so old that even my article about it is looking worse for wear. I’ve also had two Android-powered Huawei watches which I liked the look of but was left underwhelmed with when it comes to day-to-day usage. Today, I’m going to let you know what I think about Huawei’s third smartwatch. The Huawei Watch GT.

Before I bate into the full Huawei Watch GT review, I need to clarify the halfway test. Imagine in the morning, you’re halfway to the office and you realise you forgot something like:

Given you’re halfway to the office, would you go back for any of these items? For me, there’s actually nothing on this list I couldn’t live without for a day. Assuming, of course, I’ve remembered my phone in the event of forgetting my wallet (because I have Google Pay). However, for many, the phone or wallet might be enough to turn on your heel and wander back home.

For me, no smartwatch has ever done this. It just doesn’t add enough functionality to my life to make it an absolute must-have every day. But what about the Huawei Watch GT? Could this be the first to take that title?

How Smart Is The Huawei Watch GT?

How should I answer this one? The Huawei Watch GT isn’t the smartest watch on the planet, but that’s actually why it’s so smart…as in brilliant. 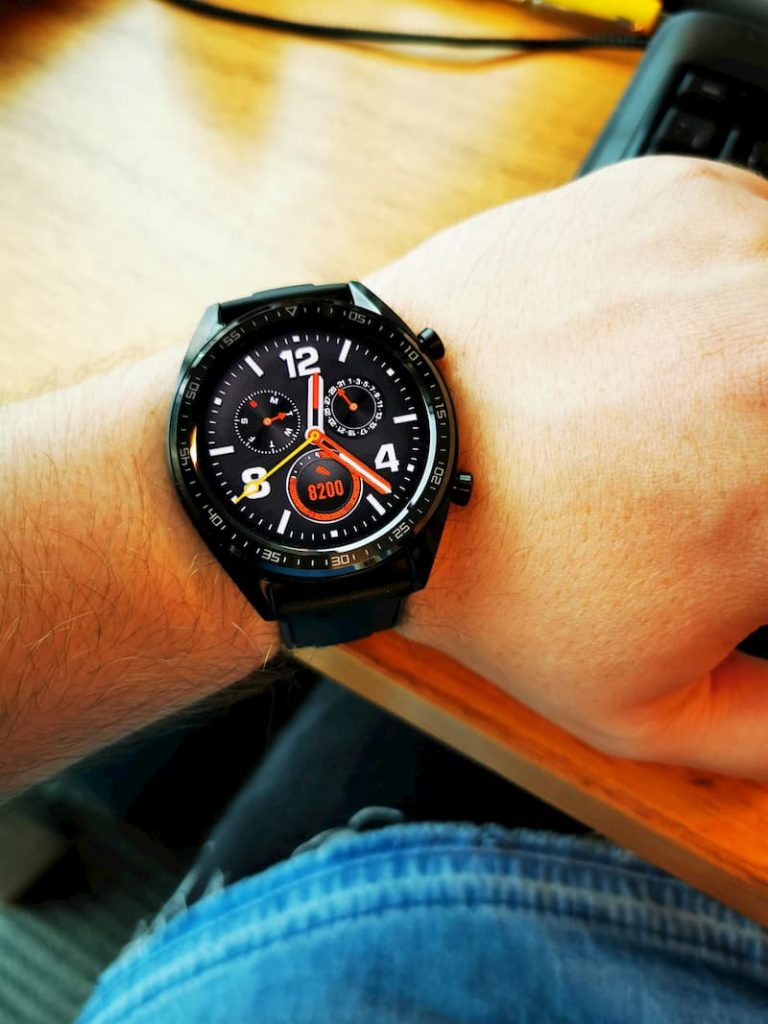 As a longtime wearer of smartwatches, one thing has always astonished me. Just how little I use the smart features. I had the option to pay with my wrist, but instead, I rather use my phone. I was playing golf and marking my game using the Hole 19 app with wearable features, but again, the phone screen won out. So what was I using my Android-powered smartwatches for?

Well, I used them to tell the time, receive notifications and…. well that’s actually it.

Yup, the Huawei Watch GT has made me realise just how little I used the “smart” features of Wear OS on earlier Huawei watches. But why wasn’t I using Google Assistant on my wrist? Why wasn’t I playing music straight to my Bluetooth earphones when running, leaving my phone at home? Because Wear OS is shite. There, I said it. It’s horrendous to use. It’s clunky. It’s slow. It’s incredibly frustrating.

It looks like Huawei recognised this as the Watch GT is the first full round face Huawei watch to utilise LiteOS. This is Huawei’s own operating system, originally designed to power Internet of Things devices created by the Chinese manufacturer. The result is a much simplified operating system which runs smoother and delivers a much better battery life without skimping on high-quality wrist visuals.

I’m going to split this into two sections. The brilliant and the bad aspects of the Huawei Watch GT, combined from my first impressions over a year ago at the London launch of the watch and the past two weeks I’ve spent using this LiteOS wearable.

I’m going to talk about lots of things here, but when it comes to watches let’s not forget the basics. The Watch GT is gorgeous. It looks stunning. Personally, I like most of the watch faces which offer something for everyone. It’s a much bigger watch face than the Huawei Watch 2 which left me a little perplexed that the second watch in the series would have a smaller screen than the first.

The Watch GT leaves all that in the rearview mirror because it’s a beaut. From how the watch looks to how it feels is perfect. I’d say the most important feature is the screen and this screen is popping every time it comes to life following a flick of the wrist.

The battery life in this watch is epic. Usually, you have two choices when it comes to smartwatches. You can either have an amazing looking watch which needs to be charged every night or a substandard looking wearable that needs to be charged once a month. The exception to this rule is the Nokia HR, but that’s a hybrid and not strictly a smartwatch at all.

Owing to Huawei’s LiteOS operating system, reduced functionality and a setting you cannot change which turns the screen off when not in use, the Watch GT will give most users between one week of use on a single charge. That checks out for me with the watch running for two weeks with a single charge in the middle.

One annoyance I had was the lack of an always on-screen setting. Turns out there is an option to have the time appear when the face goes into standby mode. A feature I like having, but just be aware this will half your battery life straight away.

I’m not going to spoof my way through talking about fitness here, but I will admit, I’m impressed by the fitness features on this watch. Huawei has been clever here in realising most people just want a watch. Additional desired features will most likely surround fitness. Everything else is usually unused nice to haves and as such, Huawei left them outside.

Without exactly being a fitness fanatic, I can see some features here that people will love. If you’re a triathlon participant, the Watch GT has a special feature for you which can track each individual stage separately. All you do is tap a button and it’ll move onto the next discipline you’re in. So yes, this also means the watch is waterproof and rated up to 5 meters.

One feature I am looking forward to trying out once I can avoid the summer beer gardens for a few days is the fitness trainer. The Watch GT has programmes built-in for you to try out. The onboard GPS means you can also leave the phone at home and unplug for a half an hour while you get a jog in.

There’s a lot of tracking going on with the Watch GT. I don’t know what it is, but I love tracking the quality of my sleeps. Wear OS watches aren’t great for this for the simple reason they have to be charged daily. The most convenient time to charge? While I sleep of course!

Having a watch with a one to two-week battery means it’s less likely I’ll lose out on sleep data.

There’s also plenty more about your life this watch can tell you. I enjoyed looking at my heart rate stats from a lazy Saturday which ended in the moshpits of Kerbdog. Step counts and heart rates went through the roof for a short two-hour window. Again, for the sports fans out there, the watch also has a Barometer which I believe to be important for climbers and hikers. Look, I’m not the outdoors type, but I hope I’m showing you just how much Huawei stuffed into this first iteration of a smartwatch running LiteOS.

This could have gone either side of the fence, to be honest. I’m a bit miffed that Huawei has changed the charging puck four all three smartwatches they’ve created. However, the latest version has a disconnectable USB-C cable. I don’t know. I just like that. 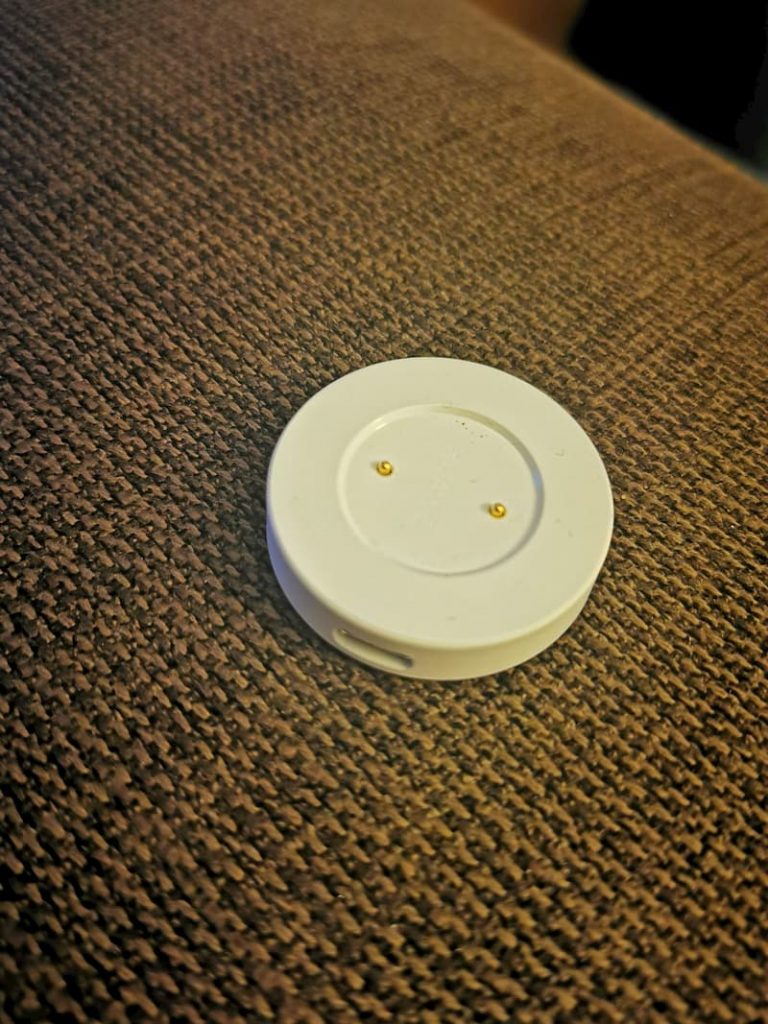 The charger itself it well designed with a magnetic snap-on mechanism securing your watch during charging. Charging is super quick too with the watch going from 0% to 100% in under an hour. Huawei lists it as requiring less than two hours, but it felt closer to one for me.

While I’m really loving the watch, there are a few niggles I have.

As is typical in these situations, one of the watches strongest points is also one of its weaknesses. LiteOS means the battery life is brilliant, but it also means some feeds don’t integrate so well. While message notifications appear perfectly, WhatsApp messages can build up with no way to read other than swapping to your phone. Even as I type that, I realise this is a pretty small niggle, but it’s a niggle nonetheless.

LiteOS also means you can’t install third-party apps to your watch or download custom watch faces. Now, for some, this might be a deal-breaker. I thought it would be for me, but the Watch GT has actually just made me realise how few of the Wear OS features I actually used.

In the age of reverse wireless charging, especially considering that the Watch GT debuted alongside the Mate 20 Pro which had reverse wireless charging, it’s odd that there’s none to be seen here. I can charge my new toothbrush on my P30 Pro, but not my Huawei Watch. I know it’s unlikely that decision was taken lightly, but it’s a nice to have feature that I would have used.

The reason I’d have used it is travelling. While many manufacturers have you think that reverse wireless charging is all about power-sharing with friends, it’s really about charging devices on the go. Plug in your phone overnight and rest your watch on the back. Both will be charged when you wake up. See? Very handing if you’re travelling and only have one cable. A missed opportunity for a great feature there.

I’m not a fitness fanatic, but still, I love this watch. The first Huawei Watch was the only smartwatch, at the time, that I actually wanted. It looked like a watch. Hard to believe how simple I am to please, but that’s all I wanted. The Watch GT made me realise I don’t really want much more than a nice looking watch with some smart features.

It’s a beaut to look at, cooks in some nice features for everyday users and goes the extra mile to please those who want a rounded fitness wearable and smartwatch all in one. Better still, Huawei will be dishing these out for the month of August.

Where to Buy the Huawei Watch GT and How Much Does It Cost?

At €192, PriceSpy.ie recommends only Amazon.co.uk as a place to buy the Huawei Watch GT. It makes sense as this is where both of my previous Huawei Watches came from. Ireland isn’t a big wearable market I’m afraid.

There’s some really good news though. Given Huawei was caught in the crossfire recently between Trump and China, the Chinese manufacturer has had to scramble to rebuild draw the punters bank in. What better way to do that other than a freebie.

Huawei is giving the Watch GT away free as a gift to customers in Ireland buying a P30 or P30 Pro. They are available from free on bill pay with Vodafone, Three, Eir, Carphone Warehouse, Tesco Mobile and Virgin Media. The free watch offer is also available with Harvey Norman who sell the phone SIM Free.