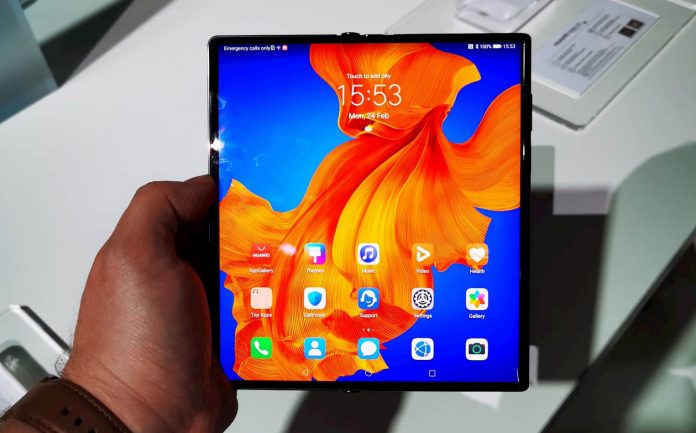 You wouldn’t think Huawei’s Barcelona launch event was hastily organised in the follow up to Mobile World Congress being cancelled. The event had everything from phones to tablets and laptops with some insights into what the future holds. Even if, to get a good look at those, you do need to read between the lines a little.

Unfortunately for Huawei, the fiasco with Google being forbidden from directly supplying the Chinese manufacturer brought plans of an EU launch to a halt. While they were winning the hardware battle, suddenly they found themselves with a massive software availability problem.

Speaking at the Barcelona launch, Huawei CEO Richard Yu, confirmed that the Mate X never launched in Europe because of the Google ban. Because the Mate Xs uses Huawei Mobile Services, the Chinese tech giant has no reason to hold back.

Now, let’s take a look at the phone itself.

I never start with the price, but this time the price brings with it lots of interesting insight from Huawei. Now, it’s not “wow, it only costs that much” interesting because the Mate Xs, at €2499, is bloody expensive. Richard Yu himself admits the phones are pricey but also claims Huawei are losing money on every phone they sell. This is down to manufacturing processes along with the research and development that’s involved too.

the phone is really good but the cost is very expensive

“To be honest, the phone is really good but the cost is very expensive” said Richard Yu speaking at a press conference after the launch event. But he’s not just talking about the cost to consumers as Yu also claimed Huawei is losing money on every Mate Xs handset they sell.

The Mate Xs will certainly have a market but that market is niche affluent early adopters, but don’t scoff at this fact. The early adopters effectively fund the future development of these phones. This phase of seemingly over-priced tech is a necessary evil in order for folding phones to become eventually affordable.

So price aside, what will you actually get for your money.

The primary draw of the Mate Xs is the screen. I’m not sure if I would yet go so far as to say it’s worth the admission fee itself but it’s close. Unfolded, the display spans 8-inches making the most of Huawei’s FullView display. 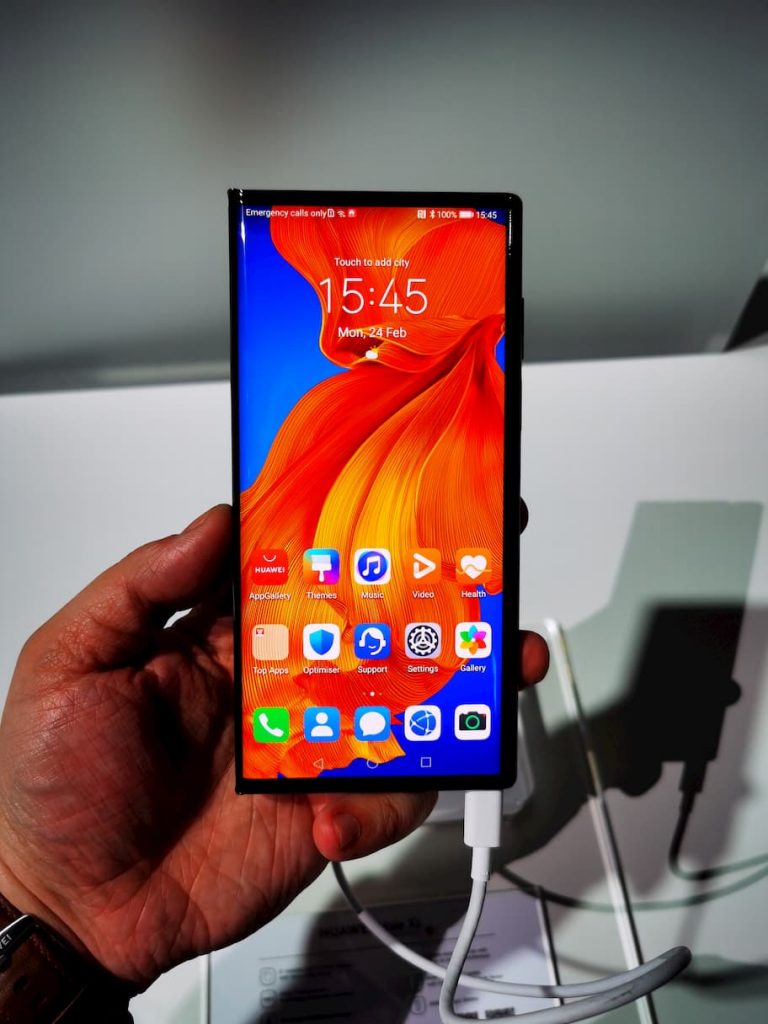 Folded, the phone offers you a 6.6-inch outward display and a 6.38-inch secondary display. 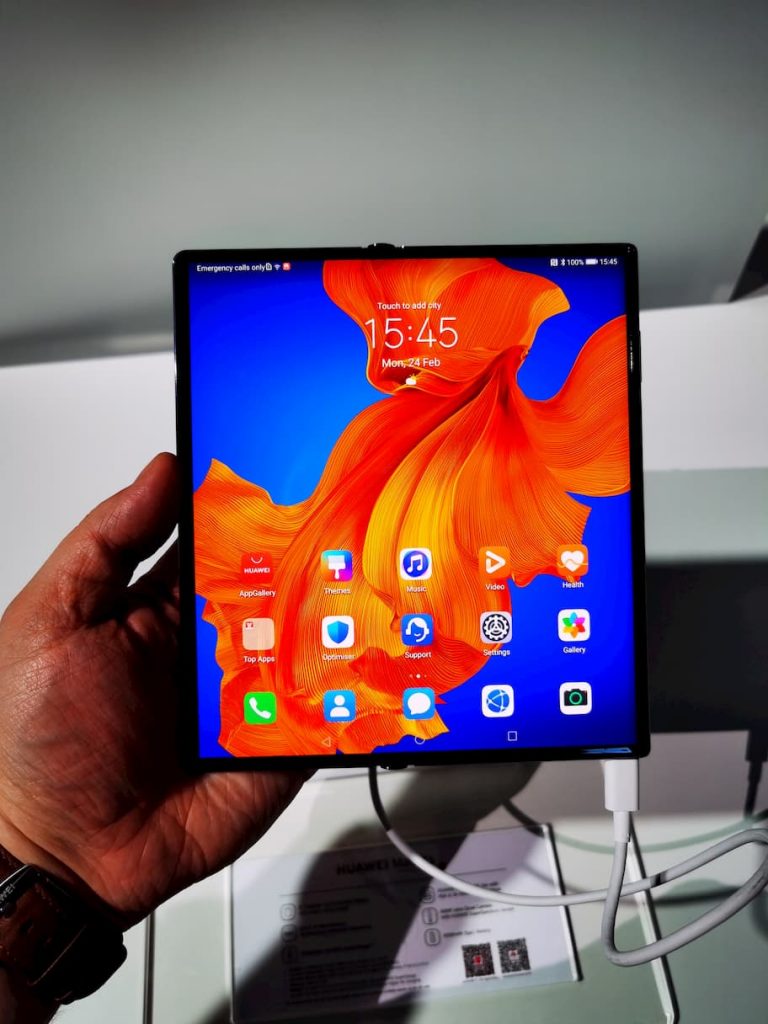 From the brief hands-on I got at the very crowded demo area organised by Huawei, the display didn’t disappoint.

While it’s often hard to really get a grasp for what these phone screens are like due to event room lighting, the Mate Xs appears to be nailing a folding display which remains sharp while delivering vivid colours.

One thing I was keeping an eye out for was the crease where the screen folds. In the past this has appeared to be quiet obvious on folding phones, I can’t say it distracted me at all during my first date with the Mate.

Build isn’t something I can remember really talking about when it comes to phones. The primary reason being they’re all more or less the same. With the era of the folding phone, this is once again a very relevant area to investigate. The Samsung Galaxy Fold shows us why, as the Fold’s design left an odd gap when the phone was closed. At the launch event, this bizarre gap was subject to a brief joke comparison on screen, using a similar graphic to last year when Richard Yu mocked the Fold’s gap.

Hands on with the Huawei Mate Xs. @HuaweiMobileIE #Together2020 pic.twitter.com/SARVLNBHfc

Effectively, this is the Mate X from last year but with an upgraded processer in the Kirin 990 chip and some upgrading elements in the folding mechanism. I don’t believe I ever got hands-on with the Mate X so I can’t compare, but the Mate Xs feels great in your hand. Even while filming some footage and manoeuvring the phone from folded to unfolded with one hand, the Mate Xs was surprisingly manageable.

The first time you collapse the screen and fold it over, it feels wrong. But after a few minutes, I was testing the phone like a junior-b hurler hurl before sledging a sideline. After the simple press of a button, the phone springs into life and starts to open. You finish the job as the screen locks into place, perfectly flat at 180-degrees.

It’s wildly fun to pop open, unfold and then fold up again. I’m sure the novelty does wear off but I was at it for a good ten minutes and it was only because there was a queue behind me that I moved on.

Huawei has really dominated the camera space in recent years. Right now, Samsung is trying to dethrone Huawei while the iPhone 11 Pro has brought Apple on leaps and bounds. The Mate Xs isn’t a play from Huawei to land the best camera on the market with this phone’s camera being more akin to that of the Mate 30 Pro, the phone I’m currently testing. In fact, it’s practically identical in terms of camera specs. The Mate Xs puts a 40MP primary lens, 16MP ultra-wide lens and an 8MP telephoto lens (the only difference where the Mate 30 Pro has a 40MP) into your hands, allowing you to take shots with up to 30x hybrid zoom.

The phone’s design means these primary lens and all the features they bring to the party are also available for selfies. This is down to the folded phone’s secondary screen allowing you to take selfies and preview your shots on a 6.38-inch screen. That’s a primary camera shot previewed on a secondary screen which would rival many leading smartphone specs.

Another area which I’ve often left untouched simply because it’s usually always the same. Now, the Huawei Mate Xs leaves us with plenty to talk about when it comes to software. First up is the firm arrival of the Huawei App Gallery. I say firm because, during the launch event, Richard Yu presented one slide which stood out to me from the rest. 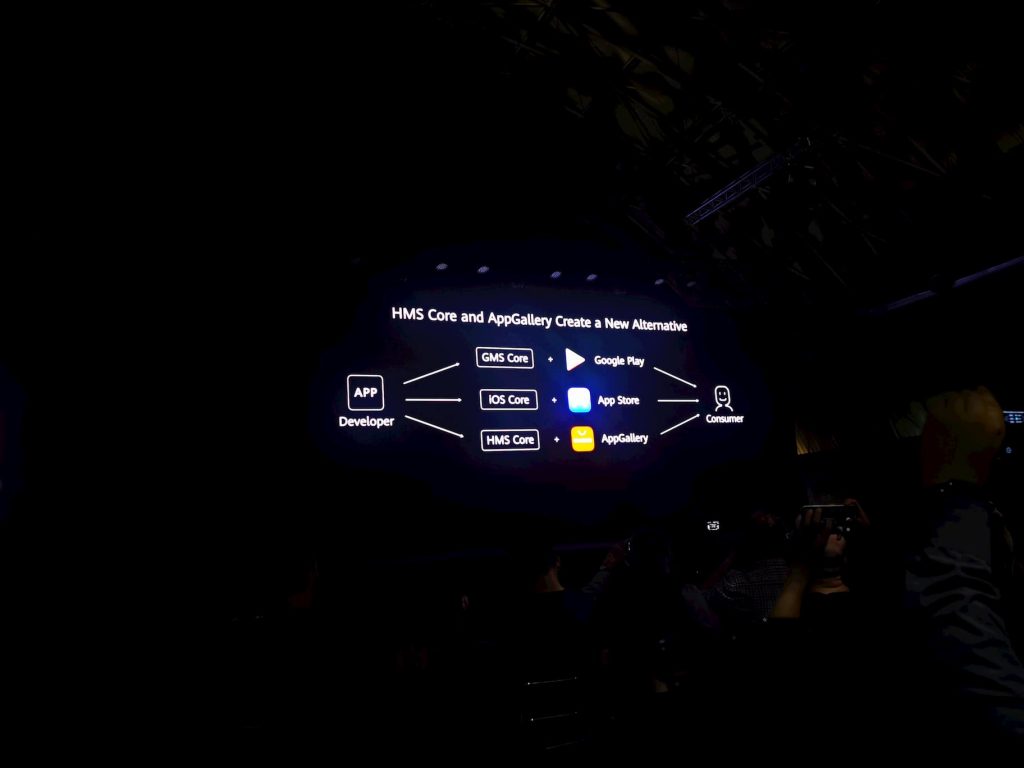 Huawei is All In

The Chinese manufacturer doesn’t have answers for everything just yet with many popular apps and services still missing off the Huawei App Gallery. I managed to install WhatsApp directly from the WhatsApp website without much fuss and many apps do offer similar options.

Today I installed WhatsApp on a HMS Mate Xs. That’s a phone with no official GMS support. But still, @WhatsApp make direct install readily available on their site @HuaweiMobileIE pic.twitter.com/5DKa5pjSpq

But many is not all and there are many also not available. The big test for Huawei is avoiding becoming Microsoft. They tried to battle Google and Apple but failed. There’s a saying that you should fail early, fail fast and fail cheap. Microsoft certainly didn’t but from chatting to fellow tech-heads at the Huawei launch event, there’s a feeling of “maybe they can do it” about Huawei.

For me, Google Pay is a massive service missing from new Huawei devices and going forward, I see the expansion of Huawei Pay as being a kind of litmus test for how Huawei is progressing without the Google Play Store.

The Huawei Mate Xs is a member of the Mate family and that means it’s aimed at business people. You know, people who need more screen and functionality like screen sharing and presentation mode. This is why Huawei doesn’t just put the best camera possible into these phones and call it a day.

Instead, they focus on business functionality and with an 8-inch screen sitting in your pocket the Mate Xs natively supports really handy multi-tasking. This means you can have two apps sitting side by side on the unfolded screen and even have the two apps interact with each other. This means you can drag and drop text or images from one screen to another.

Right now, I’m typing this review on an Aer Lingus flight using my 15-inch MacBook Pro and I can tell you I’d rather be using a wee keyboard and an 8-inch screen with press releases on one side and my writing screen on the other.

So, How Do Things Look For Huawei?

It’s way too early to pass a verdict on the Mate Xs, but I’ll be getting by hands on one in the next few weeks to write a much more in-depth review. However, I can’t comment on how things are looking for Huawei.

During the post-event press conference, another tech writer asked Richard Yu where his optimism is coming from. It was a fair question because not once has the Huawei CEO looked under pressure about the whole “Google question”. Sure, the primary part of his business is the Chinese market, but Huawei’s explosive growth outside of China coming to a grinding halt over politics would keep most CEOs in search of a bit of sleep.

Whatever about the tough times and the controversies, Huawei’s strength would appear to be Richard Yu. He’s calm and collected while remaining able to crack a joke about the darkest areas of the Huawei brand as easily as he can a competitor.

When that slide of the Google Play Store and the Apple App Store came on screen, displaying the Huawei App Gallery as a firm competitor to the two, Richard Yu said consumers deserve a choice which is why Huawei would now press on with building their own app store. The Huawei CEO has been incredibly decisive here and decided that there’s no route back to Huawei using Google Mobile Services. While the journey towards this point certainly wasn’t started by Huawei, they would appear keen on being the ones to finish it.

Now, whether or not this actually works absolutely remains to be seen. Huawei could be another Microsoft, but at this early stage in that journey, it does feel like player three has entered the game.

The Huawei Mate Xs will launch in Ireland in April with an RRP of €2499. Network availability has yet to be confirmed.

We were live at the event from Fira Montjuïc in Barcelona. Here’s everything as it happened.