Last year, after many years of waiting, the Google Pixel 3 stomped onto the Irish market as a Vodafone exclusive. 2018 was an incredible year for smartphones with the bar being set incredibly high. Still, Google’s first phone to officially launch in Ireland was a stunner. Now, Google wants to bring something new but familiar to the table. This is my Google Pixel 3a review. A review of a mobile phone that brings more to the table than any other phone at a similar price point.

Where Did The Google Pixel 3a Come From?

To be totally honest, the Pixel 3a and 3a XL came right out of left field. Was this always on the roadmap? I’m not so sure. I get the feeling that Google had excess parts and wanted to build another phone. Actually, that’s very unlikely. Regardless, the Pixel 3a is an absolute stroke of genius. From the Pixel 3, Google takes the best feature – the camera – and trims the fat, making a lean mid-range mobile phone. That’s a mobile phone which leaves the other mid-range phones in its wake.

Yet Another Great Camera In A Pixel

Google has made quite the name for themselves when it comes to cameras. Last year, they were up against stiff opposition in Huawei’s P20 Pro and Mate 20 Pro. They all stood toe-to-toe with each other. In the end, there were features on the Pixel cameras which made them stand out and some features on the Huawei range which put them a hair ahead. All in all, the cameras were practically inseparable, visible in the DxO scores:

Here’s how the Pixel 3a compares to the Huawei P30 Pro.

You can see from these shots that there really isn’t much in it. In fact, the Pixel 3 edged selfies for me, especially outdoors and especially if you wanted to take a wide-angle selfie.

The Google Pixel 3a and Pixel 3a XL will take photos that rival those from it’s bigger Pixel 3 and Pixel 3 XL brother. “Rival” might not even be strong enough. Put it this way, you’d be unlikely to spot the difference between Google’s flagships and these new mid-range value drivers.

Both the Google Pixel 3a and Pixel 3a XL pack in the same tech. Your primary single-lens camera on the rear is a 12.2MP shooter capable of shooting 4K video at 30fps or 1080p video at 120fps. Swing the phone around and you have what is probably one of the best selfie cameras on the market. Unfortunately, you do give up wide-angle at this price point, but I genuinely feel like the Pixel 3a still takes lusher selfies than my beloved Huawei P30 Pro. Hurts me to say it.

There are my words on Pixel 3a’s selfies, now for some specs. The phone’s front-facing camera brings an 8MP camera with an 84-degree field of view to the table. When you link all of this hardware with Google Photos, one of the best photo management tools out there, you end up with a dream lineup for content creators. Overlay that with the price you’d have forked out for the Pixel 3a and you’re left with the best pound-for-pound smartphone camera on the market right now.

I’ll chat about the slightly slow processor in a while, but portrait mode facing in both directions remains impressive on the Pixel 3a, competing with the likes of Huawei, Samsung Galaxy S10+, and even both the iPhone XS and iPhone Xr despite the phone costing a fraction of their RRPs.

The Pixel’s ace in the hole is Night Mode. A late release for the bigger brothers of the Pixel 3a, you get this feature right out of the box. It’s bizarre that phones can see things in the dark that we have no idea about. The technology is mind-blowing. Once again, let me remind you that the price is also mind-blowing. 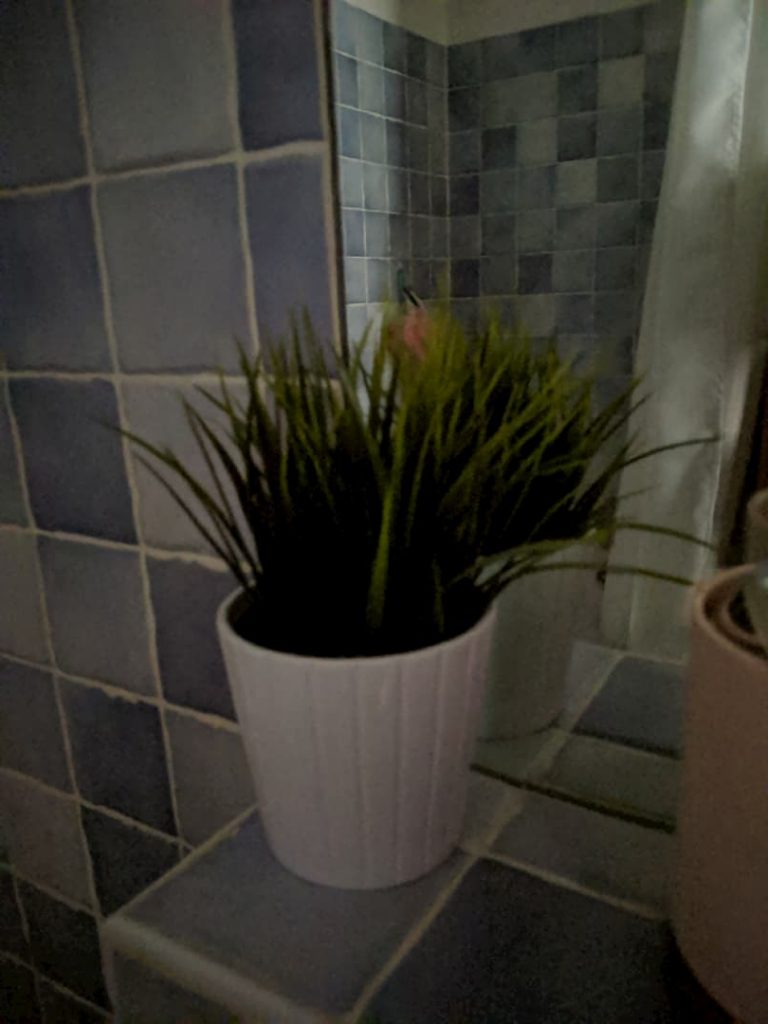 This was shot in my bathroom, in the absolute pitch black. With my bare eyes, I couldn’t even see the plant, but the Pixel 3a was able to see it and shoot it.

It’s not the best shot ever and it’s a bit blurry, but still – if you saw the darkness that I was in shooting this you’d be stunned.

Where Does Google Trim The Fat

Cool, so the pictures that you shoot with these new mid-range Pixel phones are whopper, but where is Google cutting the corners?

I tested out the Google Pixel 3a which comes with a 5.6-inch OLED panel display. Nothing here to knock your socks off, but there is something worthy of mention. If you find flagship smartphones to be far too big these days, the Pixel 3a could very well be your dream phone. It’s a nice size to pop into your pocket without being too small to enjoy using.

There’s also a full on ‘forehead’ and ‘chin’ for at the top and bottom of the display. This cuts the costs for sure and might even be something we see on this year’s Pixel 4 range. 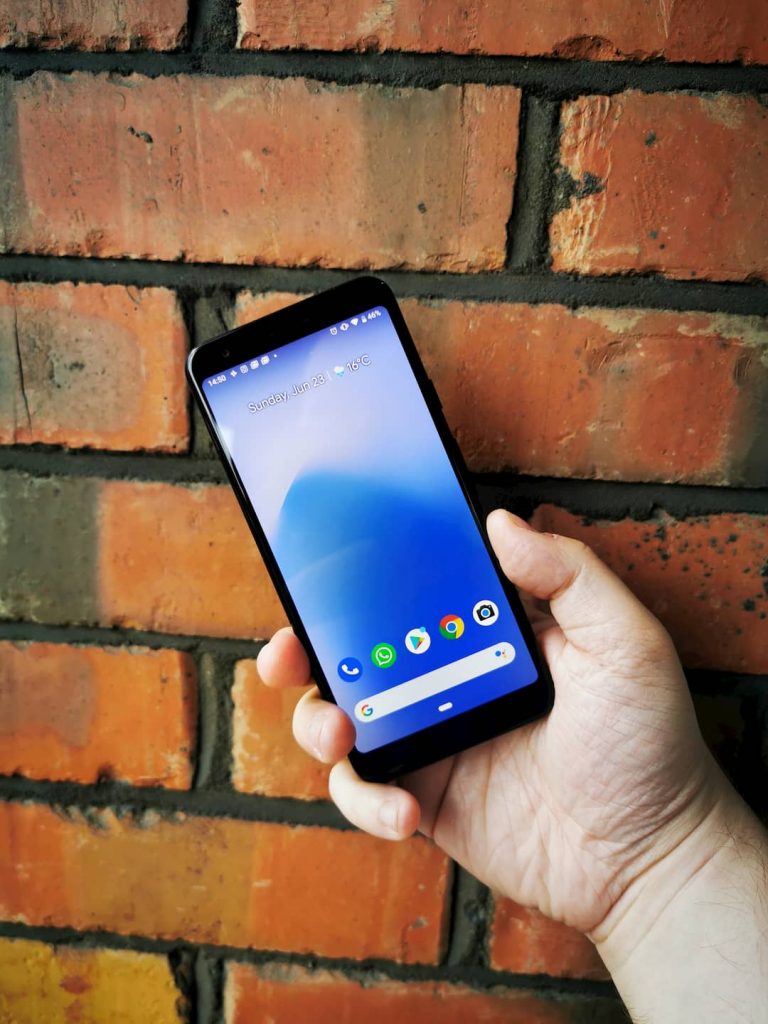 A feature that’s not for everyone, but it has to be called out because of another cool feature on the Pixel 3 and Pixel 3 XL. The Google Pixel 3a and Google Pixel 3a XL give up wireless charging. This means you also cannot use these new Pixel phones with the wireless charging stand. That also means these new phones can’t double up as screened Google Homes. You can still enjoy everything that Google Assistant has to offer including the squeeze to ask functionality.

The battery itself in the Pixel 3a doesn’t disappoint. The phone’s 3000 mAh battery easily lasted me a day and might even get most people through two. In the box you’ll also get a 18W fast charger.

After so long with phone’s having an IP68 rating, the Pixel 3a comes with no IP rating at all. That means no music in the shower, but also you should be careful if this is in your pocket during a downpour. Just something to bear in mind if you have become used to waterproof flagship phones.

This is once again more for those of you who might be attracted to the price and size of this semi-flagship. These new Pixel phones have a Qualcomm Snapdragon 670 processor on board. I didn’t notice this too much, except in the moment after you’ve taken a picture. You can visibly see the phone processing the images in front of you.

There was no massive issue as a result of this, but with prolonged use, I always wonder if a phone like this would end up getting clogged. Non-expandable 64GB memory says hello.

That’s how Google trimmed the fat, but there’s one big plus with the Pixel 3a that I’m sure many will adore. It’s only got a bloody headphone jack.

I think the inclusion of the headphone jack kinda sums up the beauty of this phone. It’s everything modern smartphones aren’t.

Is the Google Pixel 3a Worth Buying?

The Google Pixel 3a is not a flagship smartphone, but it’s a bloody brilliant smartphone nonetheless. What Google has achieved here is simply fantastic. No longer do consumers have to make the take a lesser camera because of a limited budget.

The Pixel 3 will set you back €899 right now, direct from Google. The Google Pixel 3a is just €399, also directly from Google. Both are also available from Vodafone.

That price tag is mind-boggling. While I appreciate there are corners cut, when I switched over to this mid-range Pixel 3a for a week, not once was I left feeling like I was using a cheap phone. But for a trip to Metallica where I knew waterproofing would be essential, I wouldn’t have been in any hurry to take my SIM card back out of the Pixel 3a at all.

If you happen to be a headphone nerd who needs and audio jack, with tiny hands and a love for both photography and gaming, the Google Pixel 3a should be at the very top of your list. Don’t forget, Google Stadia launches in Ireland in November and will be compatible with the Google Pixel 3, Pixel 3XL, Pixel 3a and Pixel 3a XL. It’ll be interesting to see how the processor and battery hold up, but these new Pixels are on the release list.