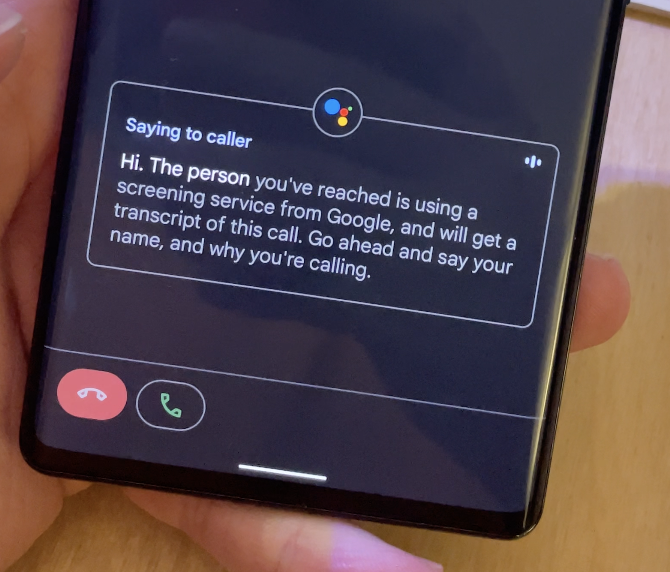 It feels remarkable that scam phone calls have been such a big problem in Ireland for the past year, or even more. Whether it has come as a direct result of the HSE cyber-attack or not isn’t the big takeaway either. I find it far more interesting that Irish network providers seem helpless to stop the calls. Google has released the new Pixel 6 and Pixel 6 Pro, both of which I’m currently testing. Would you believe, Google has included the solution to our scam call problems and all.

Google has gone big with promoting their new homemade Tensor chip in the new suite of Pixel smartphones. It’s designed to improve language processing, voice recognition and more. Google Assistant is expected to benefit greatly from the Tensor chip and it appears that is the case. The other night, my better half called me. As the screen lit up I spotted a new button that said “Screen Call”

I was a bit surprised. During the Google launch event, I saw a wee footnote that suggested this functionality would only appear in the US market. Apparently, this must have referred to Google Assistant’s ability to look after your position in a hold queue when calling someone like a bank.

How Does Google Call Screening Work?

Generally speaking, the idea here is that when you get a call from a number you don’t know or are somewhere you’re can’t answer the call, you tap that “Screen Call” button. From that point on, Google Assistant takes control of your call like a full-on personal assistant.

The caller’s responses are then transcribed in realtime so you can read who they are and what they need. At any time, you can choose to accept the call or hang up. When the caller has finished answering a question, you can manually prompt for additional information. You can gather more and more of the callers details before making your decision to take the call or hang up.

So, in truth, Google Assistant can’t stop scam calls. What it can do, is give you a set of tools to better avoid scam calls and protect yourself. If everyone had these tools, scam calls would likely dry up as they wouldn’t be as effective. Right now, scammers are using Irish mobile numbers to run their scams. People in Ireland are quite likely to answer unknown numbers. For me, it’s often a delivery driver or someone I know who’s just not in my phone book.

But a large proportion of the calls are also scammers. Now, when I get a call from an unknown number, I can simply tap that “Screen Call” button and verify that I know the person trying to get in touch.

The functionality does indeed go beyond stopping scam calls from reaching you though. I plan to use this feature when in situations I simply can’t answer the phone. Whether I’m in a meeting or chatting with a friend and weighing up whether or not the caller can wait, whether I know them or not. Given my time with the iPhone 12 and Focus Mode recently, this is yet another tool that lets you take back control in terms of how reachable you are.

This is a double-barreled question. First of all, having chatted to some fellow tech reviewers, not all Pixel 6 phones in Ireland have this feature yet. I’ve reached out to Google for clarification that this feature is confirmed in Ireland. But there’s another potential issue here; culture. I’m not quite sure how many people will be comfortable letting Google Assistant handle my calls for me. One call, which I’m fairly certain was a delivery driver, just hung up. My partner simply said “huh?” and hung up. The logic of “if it’s important enough they’ll call back” applies, and I’m happy to live by that.

What this may mark is the start of Google Duplex functionality rolling out to wider markets. For now, while I continue to test out the smarts of the Google Pixel 6 and Pixel 6 Pro, I’ll be trying this out more and more to see how it’s received.