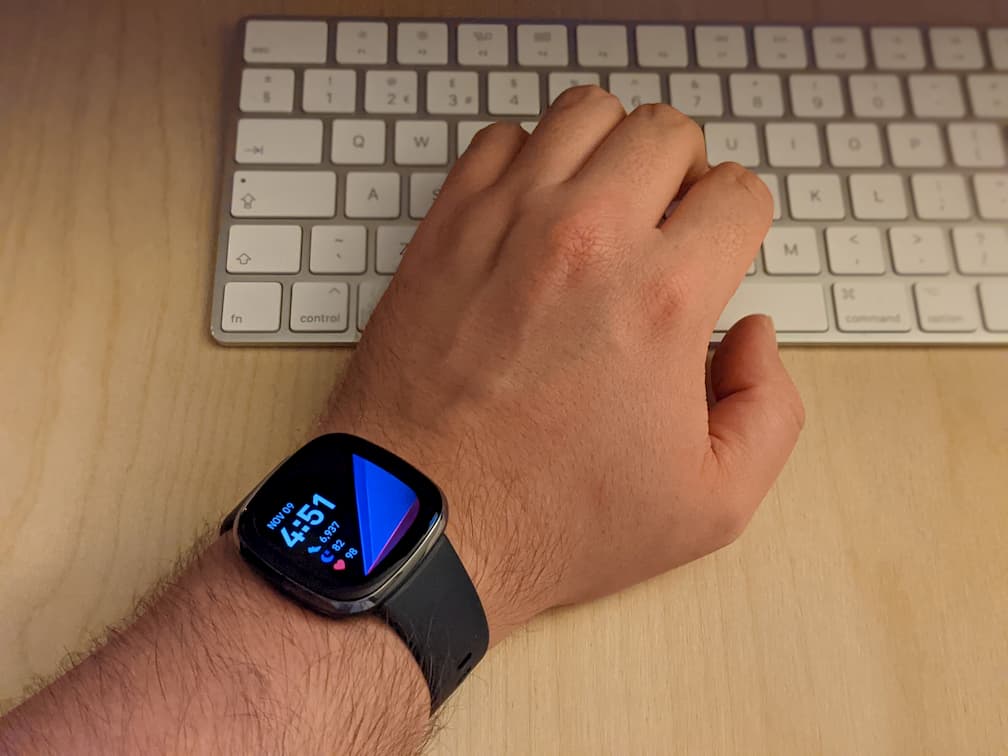 Coming into the Christmas season means people are on the lookout for the perfect gift for loved ones. Straight off the bat, I can tell you that the Fitbit Sense is going to be right up there near the top of the list. For this review of the Sense, I’ve worn it for a month and have come to the conclusion that it’s a good fitness tracker, but it’s not great. However, it is a great Christmas gift idea if you’re willing to pay a premium for it.

What Is The Fitbit Sense?

The Fitbit Sense is an ambitious wearable from the world’s best-known fitness wearable company. In fact, it’s not even fair to call this a fitness wearable given his medically-approved health tracking abilities. When the Sense launched I already gave an in-depth overview of what Fitbit promised but this article is setting out to judge whether or not they delivered.

The Sense was to signal a dramatic shift from pure fitness wearables towards a complete health and wellness wearable. How did Fitbit do?

The Sense shines through as an incredible fitness wearable. You can tell that this is Fitbit’s brown bread and low-fat butter. When it comes to your workouts, the Sense provides fantastic tracking. You’ll be able to track daily steps, distance travelled, flights of stairs or floors climbed, calories burned and your heart rate. Open up the fitness section and you can track specific workouts from running to circuit training and everything in between. When working out, you’ll also be able to access the Active Zone which gives you additional insight into your heart rate zone, whether it be fat burn or cardio for example.

What might come as a concern to some is that this doesn’t all sound very revolutionary. In fact, it all sounds like the very basic features you’d expect from a fitness wearable. You’d be right in say that too and that’s why the Sense is different. Fitbit Sense aims to deliver the expected and introduce a wide range of new health and wellbeing analytics into your life.

As someone who’s had a small health scare in the past, a total false alarm with my heart, I like the idea of a device with built-in electrocardiogram (ECG) constantly monitoring my heart rhythm. Fitbit was rather surprisingly caught napping by Apple who released this on the Apple Watch quite some ago. What both companies failed to do is achieve a user-friendly way of delivering a constantly running ECG.

I’m sure some engineer will read this and say “the man wants the impossible” but I have a real problem with the ECG on the Sense. You have to remember to use it. When you do use it, the ECG feature is super simple and fast, taking just thirty seconds of pinching your Sense to deliver you an answer on your heart rhythm. But as much of an impressive technological feat as this is, if you’re buying the Sense for this feature there’s a real chance you’ll forget to use it.

The Sense was also Fitbit’s biggest step into the wellness market and it brings the world’s first electrodermal activity (EDA) sensor on a smartwatch to the market. This sensor is designed to help you understand and manage your own stress levels. The Sense does this by asking you about your mood and measuring your conductivity and sweat levels in your skin. Like the ECG it’s a fairly simple process to get a measurement. Just place the palm of your hand over the face of the watch for two minutes.

Like the ECG this does rely on your remembering to take a measurement and I constantly forgot to do this. Also, with my hand over the screen for two minutes, there’s very little feedback to let you know the measurement is still going well. It’s an uncomfortable two minutes of hoping it’s working.

Sense As A Smartwatch

The great thing about choosing a Fitbit smartwatch is that you get all of those fitness and wellbeing features layered on top of what is a pretty decent watch.

The Sense is a sleekly designed watch. The glass on the rounded square watch face is rugged, surrounded by a stainless steel bezel. It’s super light which means you tend to forget you’re wearing it, which may actually cause some of the “remembering to capture metrics” issues I had. The “button” on the left side of the watch is easy to miss and does take a little getting used to. Rest assured that after a few days it becomes second nature.

In the box you’ll find two straps; one regular and one really long one. I would say I have an average wrist and I just use the last notch. Take some time to pick the right notch too. I had picked the wrong one first and felt some irritation which was resolved by going a little looser. Most importantly this didn’t impact heart rate measurement.

The only snag with the design, and this is a somewhat personal preference, is that the Sense doesn’t look like a traditional watch. I prefer my wearables to look like a regular watch with a rounded face and actually like them to be a bit bigger than the rather small Sense.

As is so often the case, I have problems with testing batteries because I’m used to Huawei products. Both the Huawei P40 Pro and Huawei Watch GT Series have remarkable batteries capable of two days and two weeks respectively. The Fitbit Sense can’t challege for two weeks but you’ll comfortably get five to six days between charges.

One frustrating feature of the Sense is the fact it uses a proprietary charger and doesn’t support wireless charging. With so many smartphones supporting reverse wireless charging these days, it seems a shame that if you were to head away for two weeks and you forget your charger, you’re stuck.

No Storage For Music

I was delighted to see native support for Spotify thinking I could sync my favourite music and leave my phone at home. Unfortunately not. You still need to carry your phone. Apparently, Deezer can sync music but I wasn’t able to get this to work and there are a lot fewer people out there with Deezer too. There’s no option to copy your own music files onto the watch either so I’m afraid you’ll still be bringing a phone with you if you were hoping to ditch it.

Alexa Only, For Now

The Sense does offer Alexa support as your smart assistant. I didn’t find myself impulsively using this feature very often as you can’t use voice-wake. Google Assistant support is will land soon but it’s baffling that this wasn’t the first assistant to ship with the Sense given Google’s parent company Alphabet bought Fitbit late last year.

Not a Sense-specific feature at all but this watch does support Fitbit Pay. You can link up your bank card, if they support it, to your wrist for contactless payments. We’re all trying to use cash less if we can and this is a handy way to use contactless above the €50 limit. If you use Google Pay, Apple Pay or Fitbit Pay you can pay up to your daily bank limit which is usually €2000 or more.

As part of this review I also got to test out Fitbit Premium. While I’m on the fence about the Sense’s value, I’m completely decided on Fitbit Premium. You can avoid it. Fitbit Premium offers some additional insights into some of the stats, like sleeping for example, while also offering a range of workout and generally wellness videos. After trying one or two workouts, I ended up on YouTube looking at much better workout videos which weren’t costing me a penny.

I found the disconnect between these workouts and my Sense to be rather unusual too. It felt as if the two systems were completely unlinked. At €8.99 Fitbit has overpriced what they’re delivering. Companies have realised that the real money is in subscriptions and not hardware but this Sense and Premium combination feels a bit rich twice.

There’s no question that the Fitbit Sense is a fantastic wearable. However, the price is why this review might generally sound like I’m a little disappointed in the Sense. At €330 the Fitbit Sense sets an impossibly high expectation and I’m not even sure what Fitbit would have had to have done to deliver satisfaction for that price.

This is why the Fitbit Sense is probably going to be such an excellent Christmas present this year. If your shopping for someone who is big into their fitness and well being and that price is in your budget for a loved one’s “big present” then they’ll be eternally grateful that you got them the Sense.

If that’s a bit rich or you’re shopping for yourself, the Fitbit Versa is €230. It removes some of the fancy sensors that didn’t really impress me all that much and retains the excellent fitness tracking core you’d expect from Fitbit.