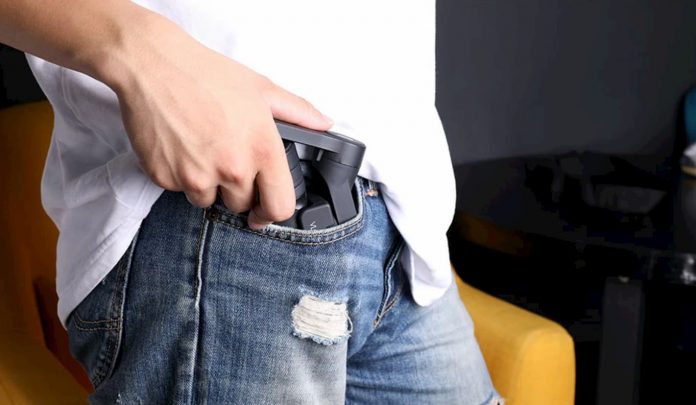 I’ve been a big fan of both gimbles in general and those specifically made by FeiyuTech. While you could argue DJI lead the market, FeiyuTech is one of those challenger brands that never fails to impress. I got my hands on the new FeiyuTech Vlog Pocket just before Christmas and took some shots around the Berlin Christmas markets to see how this new smaller gimble held up to some of the bigger models I’ve used.

A gimble at the Christmas market

The FeiyuTech Vlog Pocket is compact and tiny. While you’ll often see pocket-sized bandied about in product descriptions I was shocked when I took the Vlog Pocket out of my bag, shot some video but then folded it up and popped it in my pocket. I’ve used a few gimbles over the years and it is a bit of a pain when you have to keep stopping and putting your gimble away when you’ve finished shooting. Considering FeiyuTech are pushing the “pocket” element of this gimble, it seems only fair I confirm this is a massive plus for the Vlog Pocket.

Despite being pocket-sized, there’s no let-up when it comes to features and power. Here are some of the most impressive features on the FeiyuTech Vlog Pocket.

Just like putting your gimble away when shooting, levelling is quite an annoying part of owning a gimble. Every now and then, you need to stand your device up on a flat surface and reset the centre point of your gimble to ensure you’re getting a level shot. It’s called levelling and somehow, despite being pocket-sized, the Vlog Pocket doesn’t require you to level at all. Considering they’ve gone all-in on convenience with this gimble, not requiring levelling is actually a brilliant feature and not one I thought such a compact device would be able to avoid.

There’s an even more impressive feature the Vlog Pocket packs beyond not requiring levelling.

My daily rider is the Huawei P30 Pro and I previously used the Huawei Mate 30 Pro. These two phones are surprisingly heavy weighing in at 192g and 189g respectively. This left my early gimbles struggling to keep up, including my beloved Vimble 2. Despite being much smaller, the Vlog Pocket can handle phones weighing up to an incredible 240g. From my own digging around, that’s more than the heaviest smartphones on the market.

In addition to the increased weight capacity, the Vlog Pocket can shoot both landscape and portrait with just a double-tap of a button. If you are a content creator you’ll instantly appreciate the usefulness of this as the gimble allows you to quickly swap from YouTube-style landscape shooting to Instagram Story style portrait shooting.

The FeiyuTech Pocket brings plenty of additional specs to the table including up to 14-hours worth of battery life. But for me, the greatest improvement the Vlog Pocket brings to the party is the smarts. The Feiyu ON app has been greatly improved from some of the earlier iterations. I had actually given up using that app because I really didn’t rate it, but now it’s brilliant. Connectivity through the app has been greatly improved however, there’s still no native support for Filmic Pro which is a pity.

While many features of the Feiyu GO app have been massively improved including some fantastic facial recognition and tracking software, the Hitchcock dolly zoom effect just didn’t work for me. To be honest, this is such a niche feature I wouldn’t lose sleep over it and I’m going to finish this section by once again emphasising how much improved the Feiyu ON app is. FeiyuTech also sorted another bug bearer of mine in finally improving connectivity between the gimble and your smartphone’s native camera. You can now control features like starting and stopping recording using the buttons on the gimble.

It’s brilliant. While built-in stabilisation is getting better and better on smartphones, I can always tell when someone has gone the extra mile and shot with a gimble. Actually, it’s totally obvious when people aren’t using a gimble and if you want to shoot what’s known at “buttery smooth” video you’re going to need a gimble. For less than €100 this is one of the most impressive videos shooting gadgets you can pair up with your smartphone. It’s truly pocket-sized but doesn’t give up an inch when it comes to quality or functionality.

The FeiyuTech Vlog Pocket is available from plenty of online stores but personally, I’d pick up something like this from Conn’s Cameras in Dublin. They’ll even deliver for you.