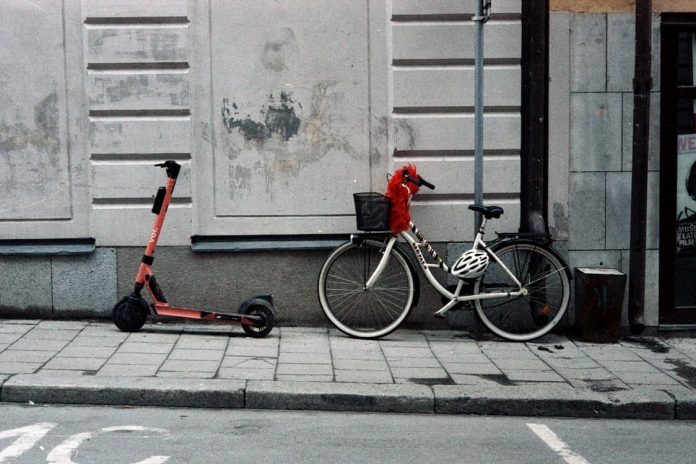 Electric scooters are more in demand than ever before. With people looking for public transport alternatives, the electric scooter has risen to the surface as a popular solution for commuting. Unfortunately, they are not a road-legal solution but are retailers doing enough to inform consumers of this fact?

People don’t much like the idea of being stuck in a bus or LUAS with countless others. To be totally honest, this pre-dates COVID-19. I was using an electric scooter to get to the office before working from home was a thing. Every Monday I’d have a smile on my face, flying past rows of drivers who thought it was wise driving into Europe’s most congested cities.

Dublin City was crying out for a mode of transport like the electric scooter so it’s no surprise that people are turning to them in their droves. Halfords, who claim to be Ireland’s biggest e-scooter retailer, has seen a 700% surge of sales across their 24 Irish stores.

Matt Banks, Halfords e-mobility expert says that “the big rise in consumer demand for e-scooters means there should be new laws in place to regulate their use and let everyone enjoy the benefits they can bring. The safe use of e-scooters has the potential to revolutionise the way we travel and can help address pollution and congestion problems”.

Minister for Transport, Eamon Ryan, has confirmed that those laws are coming, with work started and the laws expected to be in place for 2021. However he also clarified that until the laws are updated, electric scooters remain illegal to use on Irish roads. But are retailers doing enough to inform consumers of this?

I called a Dublin Halfords store to see what their approach was. When the assistant answered the phone I said “I’m looking for buy a scooter for commuting in Dublin City Centre, do you have any in stock”. The staff member who answered was really nice and friendly, informing me which items were in stock and that I could order online for store collection.

At no time during the call, however, was it highlighted to me that to commute on an electric scooter in Dublin City centre would be illegal. Now of course, Halfords aren’t legally required to inform me at all. Electric scooters are not illegal. It’s their use on public roads and bike lanes which is illegal.

I asked Halfords if they inform customers about the illegality of electric scooter on public roads and was told the retailer makes “it clear online, on pricing tickets and in shops that e-scooters are not to be ridden on public roads and only on private property”.

I went to the Halfords website. It didn’t take me long to find an electric scooter as it’s on their homepage in a section called “Top Trending Near You”. It’s the Xiaomi m365 electric scooter, the same scooter I myself own which has been locked up since the start of the year.

The Halfords website does indeed state “Please note that this scooter is not to be used on public highways, only on private property with the owner’s consent”. However it’s quite far down the page on desktop and on a mobile device it takes nearly a minute of scrolling to find. In addition, above the message is other content like “make journeys effortless” and an electric scooter buyer’s guide which fails to mention the legality issues at all.

What Other Retailers Say

Halfords is not alone here. I Googled “electric scooters Ireland” and checked what other retailers were doing.

Urban Movement, who are paying to advertise when people search for related terms, have a range of scooters but their product pages do not mention scooters are illegal on public roads. Nor is it mentioned on their “About Us” page.

To show just how much money is to be made from selling electric scooters right now, another popular result in Google is The Camera Centre in Dublin. Here there is no mention of the fact it’s illegal to use electric scooters in public spaces.

Lifty.co is another dedicated scooter retailer. Their site has inconsistent messaging. Some product pages mention that you shouldn’t ride electric scooters on public roads while others omit this. They do, however have a message at the bottom of their website on every page which states “electric scooters are not to be used on footpaths, cycle lanes or roads. It is the complete responsibility of the customer to ensure that you operate your e-scooter within all country and local laws”.

Fish In A Barrel

All of this isn’t just a grumpy tech reviewer at his laptop giving out. While I believe consumers should be doing their research, retailers should also be looking out for their customers, even if they are not required to by law.

Statistics recently revealed that An Garda Siochana have seized more electric scooter riders between July and October than they did in the first six months of the year.

With COVID-19, people have turned their back on public transport and have sought options like e-bikes and electric scooters.

E-bikes are perfectly legal but electric scooters are not and right now it’s like shooting fish in a barrel for the Gardai. The result for the consumer can be severe. One electric scooter rider received five penalty points on his driving license and a €300 fine. While it’s been a tough year for retailers, it’s not fair that consumers should be put at risk.

I’m obviously a massive supporter of electric scooters. They can reduce congestion and pollution in our cities and frankly I think it’s ridiculous that they’re not road legal yet. However, coming into a busy Christmas period the electric scooter is being regarded by consumers and retailers alike as the “must have” gift this year. Just check out this Google Trends data which shows steady increase over the past twelve months.

Hopefully, electric scooters are legalised in the near future but until then, here’s hoping retailers make more of an effort to inform consumers. To be fair, there’s no requirement on retailers to inform consumers. They’re not legally required at all but it does feel a little like shoppers are getting caught in the crossfire here.