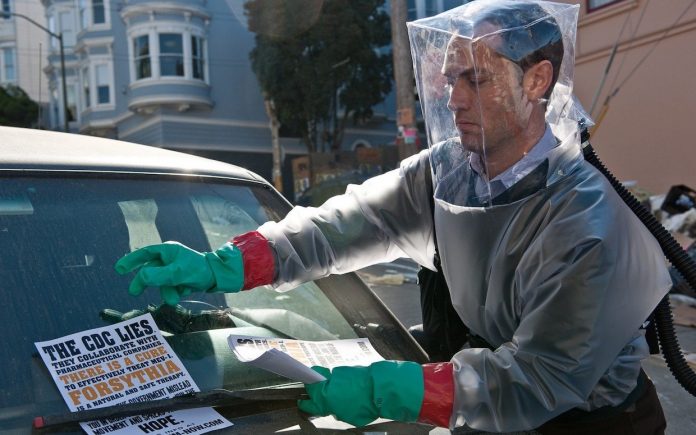 Most people who know me know I’m a bit odd. You know, like that kid in school whose favourite colour is black and his lucky number is 13. Well, as soon as this Covid-19 outbreak started hitting the headlines, I’ve had an urge to watch movies about outbreaks and pandemics. What surprised me is how some of these went beyond entertainment and helped me grasp what’s going on out there behind the scenes.

I really believe RTÉ should air this movie right now. Released in 2011, this movie about a lethal fictional virus spreading around the world is strangely prophetic. Fortunately, I’m not talking about the lethality of the virus which is far worse than Covid-19 and more akin to the 1918 flu.

On the surface, you could see watching a movie like this as being an unnecessary way to raise your own anxiety levels. However, Contagion, which is nine years old, also predicted a lot of what’s happening right now. The movie did lean on specialists and scientists. Since the movie came out professionals also credit the movie for its accuracy. The devil is in the details with Contagion with specialists noting the inclusion of things like R0, pronounced “R nought” showing the movie involved experts.

In terms of being true to life, especially with regard to Covid-19, some of the things I spotted were people online suggesting random medicines help with no evidence, panic buying in supermarkets and contact tracing once someone is diagnosed as sick. The scientists in the movie also advise people to stop touching their faces and that no level of care in washing and cleaning is over the top.

There’s a lot of science behind the movie and I’ll admit that can add to it’s scariness. But if you find yourself looking for a great movie to look beneath the skin of reality today, this isn’t going to leave you wanting for much more. Personally, I found it really helpful and insightful.

The Train To Busan

South Korean cinema is having a bit of a moment right now. Many will know of and likely have seen the Oscar-winning Parasite. However, The Train to Busan is a 2016 movie and it’s brilliant. As is the case with a lot of these virus movies, there’s a zombie angle.

I loved this movie because it was telling a fantastic story throughout and let nothing get in the way of it. There are some political elements and metaphors too which reminded me a lot of Parasite. So, this isn’t a brain-dead zombie movie like so many that have gone before it.

I rented The Train to Busan on YouTube for €2.99

Now, this is a classic. Outbreak is about a small town that is entirely quarantined when it becomes ground zero for an Ebola-like outbreak. It defined the medical-emergency movie genre (that’s a thing) and for me was the start of quite a few catastrophe movies to emerge in the mid-nineties.

I didn’t like World War Z at all when I watched it first. I was going through a zombie phase having read the original book the movie was based on. It took too much license for me. However, I recently re-watched it and actually enjoyed it a bit more. Maybe it’s because of the reality we all live in now.

For me, the biggest problem is that World War Z isn’t a zombie movie at all. I have this bone to pick with lots of “zombie movies”. Instead, this is a pandemic movie. It’s the classic race against time movie and it’s packed full of action. It all gets a little silly in parts but this might be a better movie to ease into these kinds of movies because there’s enough of a gap between you and reality.

World War Z is available to rent on YouTube for €2.99

It’s not a zombie movie. This is much more of a pandemic movie again. Will Smith is brilliant is this film as for the majority it’s just him and his dog Sam. Smith plays the last healthy man in New York desperately trying to find a cure for the aggressive beings that now roam the city during the night. The movie shows how authorities shut down Manhattan completely with a huge show of force.

Not sure how many times I have to say this but 28 Days Later is not a zombie movie. The first sign of a non-zombie movie is how fast the “zombies” move. If they’re running, it’s unlikely they’re zombies at all. Just a rule of thumb.

28 Days Later is absolutely a pandemic movie. It’s all about the Rage Virus spreading from animals in a testing facility to humans. Right now, our cities resemble those of 28 Days Later as guidance from many countries is to stay indoors. I myself live in Dublin City centre and the view from my gaff is that of eerie silence.

28 Days Later is a goto classic movie. I’d watch it at least once a year regardless of what’s going on.

This article absolutely did not start out with the intention of recommending you rent videos on YouTube. With that said, my own movie collection and streaming services have been left with a bit of a gap. Looks like no one wants to be seen to be streaming pandemic movies. YouTube offers a fairly decently priced rental offering for nearly every movie imaginable.

While the likes of Contagion are full of facts, the movies themselves are fiction. If you’re looking for facts on Covid-19 take them only from trusted sources. You can check out the WHO WhatsApp information service or check out the HSE website.