Home News Entertainment News The New Tiger King Episode: Too Much Of A Good Thing 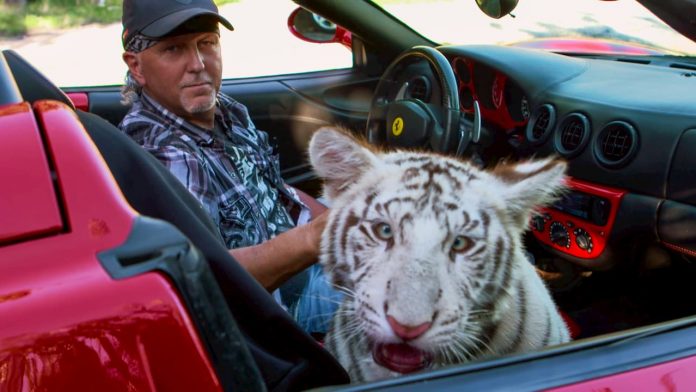 It’s the self-proclaimed “biggest documentary in history”. Tiger King: Murder, Mayhem and Madness was the perfect formula. Take some bonkers people, add some bonkers big cats and let a bonkers storyline play out. Add to this the fact the entire planet is locked indoors and you’ve got a mega-hit. Maybe they were right. Maybe it’s the biggest documentary in history. So maybe, it’s not too hard to wonder why they’d add one last episode. The shame is that they really shouldn’t have.

How Did They Film A New Episode Of Tiger King?

We’re in the middle of a global pandemic, so most people are wondering how the even recorded a new episode of the Tiger King. It might have been better if they just chopped up old unused clips, but instead, it’s all-new, shot in isolation.

The producers signed up Joel McHale to host interviews with some of the stars from the show. They then sent everyone iPhones, AirPods and, I assume, tripods. I would imagine they then called them on another number to converse on speaker while the iPhone and AirPods recorded video and audio.

It’s innovative, to say the least. However, from years of supporting the Dublin Smartphone Film Festival, I’m not at all surprised that mobile can produce high-quality video quality. The problem with this new episode of Tiger King is the content.

What Is The New Tiger King Episode About?

No longer is this a fly on the wall documentary about the bonkers events at several big cat zoos. This new episode is a one-to-one interview where Netflix are just poking the beast. They’re really trying to drain the bottom of the barrel. The questions aren’t at all hard-hitting either. In truth, McHale just acts as a go-between for people on social media and the people from the show.

If I’m honest, there was one particular question that was warranted. Saff Saffery famously had his arm ripped off by a Tiger in the show. Throughout the show, he is referred to by an incorrect pronoun. Despite being a transgendered man, Joe Exotic and others referrer to him as she/her. His reaction to this is probably the only bit of decent insight or new news to emerge from the new episode. To save you watching the whole episode for just this part, he’s not all that bothered, claiming others seem to be more bothered by it than him.

To be frank, it’s a damn shame they bothered with this. Unless something amazing happened after 20 minutes you should avoid this. I say that because I actually turned it off. The show just lets some of the other stars from the show take pot-shots at the mains stars.

If Netflix is going to dip back into isolation productions, I hope they don’t forget the importance of content and storytelling.