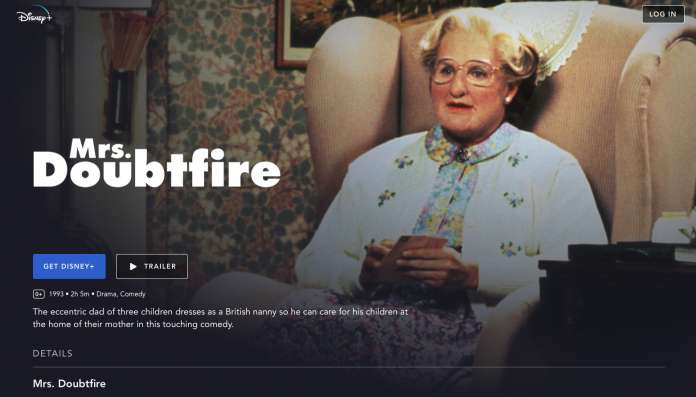 Eagled-eyed internet users might have spotted a lot more chatter about Mrs. Doubtfire than usual. You wouldn’t begrudge it because Mrs. Doubtfire is one of the best comedy classics going, arguably some of Robin Williams’ finest work. But why the sudden jump in interest again? Well, it has emerged that there is an R-rated version of the movie that has never seen the light of day, and everyone is very interested.

If that’s enough to make you want to jump in and give the classic a watch, Disney+ customers can stream Mrs. Doubtfire right now. But it’s the original cut.

If you’ve ever watched an interview with Robin Williams, you’ll know what kind of energy the man had. He was wild and his greatest strength simply had to be improvisation. Williams could make the mundane hilarious in a fraction of a second. This could be traced back to the very early days of Williams’ career when his improvisations would leave fellow drama school attendees doubled over with laughter.

Improvisation a strength, much of the random unscripted moments Williams brings to roles becomes his most memorable moments. Check out these ten examples.

And this is where we get to Mrs. Doubtfire again. It recently emerged that during filming the hit movie, Williams had improvised so much material that there’s an entire unreleased version of Mrs. Doubtfire locked away somewhere.

In an interview with Entertainment Weekly, the movie’s director Chris Columbus confirmed that there is indeed an R-rated version of the movie. The original cut was PG-13, but during filming Williams had ad-libbed so many lines that another cut exists which would need to be Rated-R.

The director and Williams had a deal where they would first shoot scenes before letting Williams off the leash to do what he though the scene needed. Columbus describes how the actor would “sometimes go into territory that wouldn’t be appropriate for a PG-13 movie”.

It’s obvious enough, but this also confirms that the director had planned the movie for a certain age audience and they couldn’t wander too far from that.

Rated-R is a classification from a movie rating system from the U.S. When a movie is classified as “Rated-R” it’s deemed “restricted”, hence the “R”. To view this movie, you would need to either be over the age of seventeen or be accompanied by a parent or guardian. This is due to some adult material and parents would be encouraged to review the movie before letting kids watch it.

There was also rumoured to be a NC-17 cut of Mrs. Doubtfire, but the director denied this, saying he had “only [previously] used the phrase NC-17 as a joke. There could be no NC-17 version of the movie”.

Will The R-Rated Version Of Mrs. Doubtfire Be Released?

I think it’s almost certain. The movie industry is on its knees right now as a result of the pandemic. Shooting new material is complicated. Making the most of content that already exists could be a way for the industry to make a quick buck. Zack Snyder’s extended cut of the Justice League has just been re-released. While campaigns to get this cut released took place long before the pandemic, the decision to release on the HBO Max streaming platform was made in May 2020. Make of that what you will.

The original cut of Mrs. Doubtfire is available to watch right now on Disney+, but I have a feeling that it won’t be long before this Robin Williams cut of the movie is released too.