Spider-man, Spider-man…I can do whatever a Spider-man can, with my PlayStation 4 control and that’s enough to keep me happy. At its core, Insomniac Games’ new adventure strives to make you feel like Spider-Man and it delivers in spades! From the moment the initial screen loaded to the story line ending credits, this game had me hooked in a way that no game has managed to do in a long time. Thanks to a brilliantly written story-line, gorgeous cut scenes and epic web slinging mechanics, Insomniac’s first foray into the realm of Marvel superheroes is an open world of crime and combat that excites from the outset.

Sure there is a small learning curve when you first get going with every web sling bringing an instant fear of a deathly plummet but once you figure that out it’s easy to amaze your mates with feats of acrobatic madness.

Thank Christ we don’t have to go through the usual back story, when we first meet Peter Parker he’s already a seasoned pro, holding down a job, helping Aunt May and trying to get back in Mary Jane’s good books. This slightly older Spider-man dynamic gives the game a great starting point as everyone’s favourite web slinger already has a great relationship with the NYPD — particularly with police captain Yuri Watanabe, who regularly calls “Spider-Cop” for his help. Just listen to the calls between Yuri and Spidey, they will brighten up your day with some quality puns. 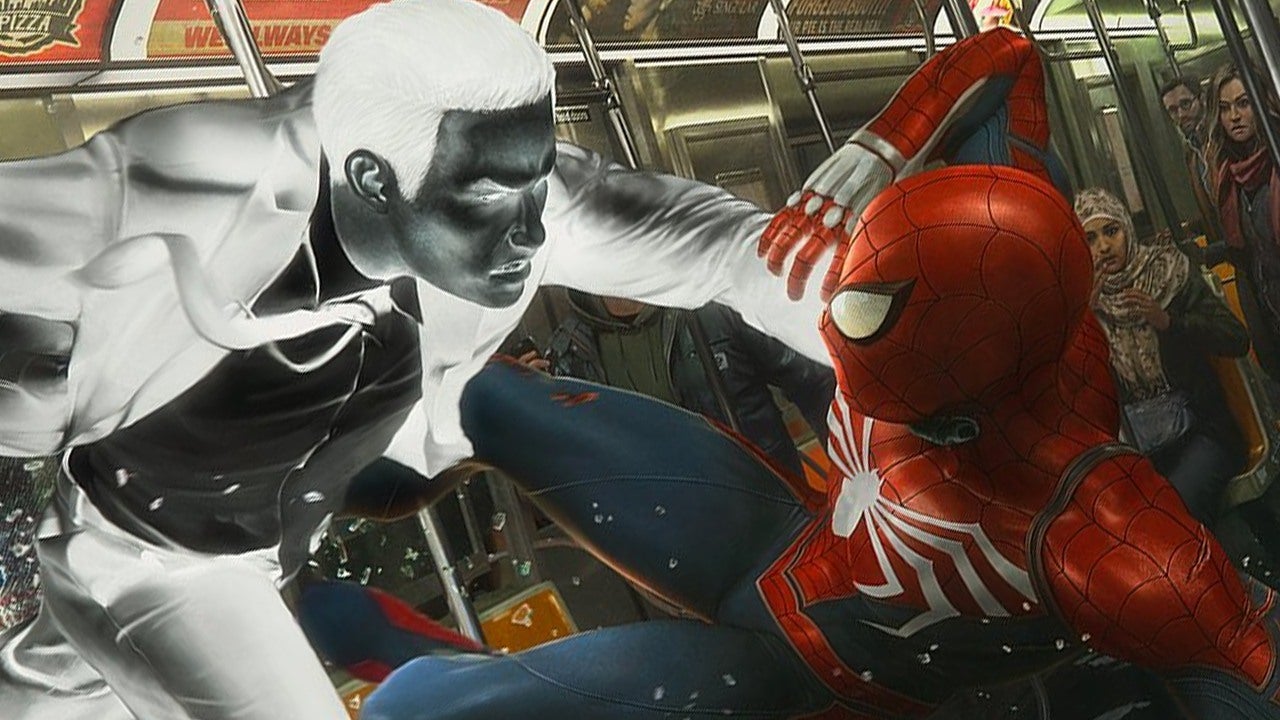 Anyway with most of Spider-mans greatest enemies behind bars, someone has to takeover. Enter, Mister Negative and his henchmen, the Inner Demons who plan to steal an Oscorp bio-weapon known as Devil’s Breath to cause chaos throughout the city. Without going into any details that will ruin the game you have to play as Spider-man, Mary-Jane, Peter and another character throughout the game to take down Mr Negative and a few other familiar faces.

Oh and there’s a rake-load of side missions that will really help you get up to speed with the game play, unlock extra powers and allow you to face off against a couple of other well known villains. 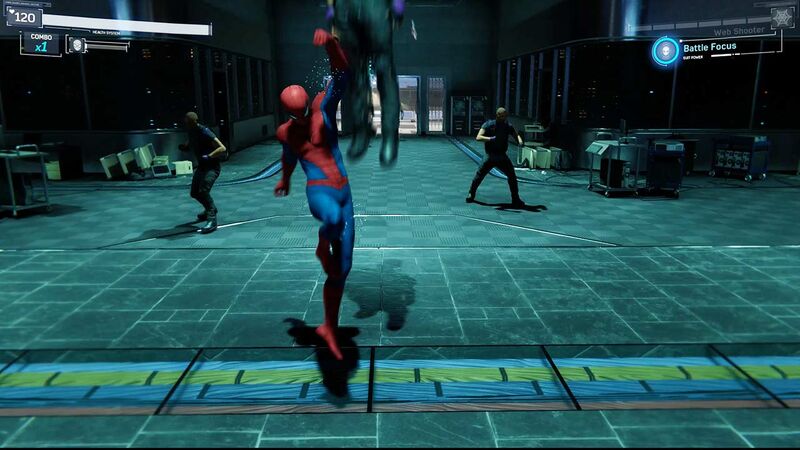 Pretty much the off we are thrown into the thick of the fight and if you have ever played the Batman Arkham Knight series then you are going to pick up the combat control here in a matter of minutes.

“Spider sense” will allow you to acrobatically dodge attacks in style while building combos increases a focus meter that will allow you restore health of perform a really cool one-shot-drop style attack on your opponents. As usual in these type of games Spidey starts with some basic enough controls but as you develop throughout the game and increase your level you gain things called skill points. These skill points then let you acquire new fighting moves, swing mechanics and defensive abilities.

Sure kicking and punching is grand craic and all but the real fun comes in the form of the web-shooters. Grab items from your environment to throw at your enemies, tie them up or sick a bunch on spider-drones on them, you can do it all. Importantly each aspect of the combat mechanism fells natural while the movement and timing fits perfectly with Spider-man’s unique style.

Things like how you move through vents, spy on potential threats and move with stealth are clear rips from the Batman Arkham Knight series but once in the midst of the action you won’t even care.

There are a bunch of suits to unlock throughout the game. Each suit isn’t a simple fashion accessory to customise your main main but each suit and gadget you unlock brings another dimension to your in fight capabilities. Upgrades are achieved through tokens, which aren’t too hard to find (side missions and busting crimes will picks these up).
But that’s not all, each suit that you unlock comes with its own unique suit power. Whether it’s a set of extendable arms or unlimited focus you can mix and match suits and powers, so you won’t be stuck wearing a costume you don’t like just for the power.
Anyone who knows anything about Spider-man knows gadgets are a big part of his arsenal, so of course they play a big part in The Amazing Spider-man. Change the way your hero’s web attacks work by simply pressing L1 and scroll through the selection wheel to find the weapon that suits you best. Again at the start you begin with the simple Web Shooter but as you progress through the game you unlock things like web drones and electric web that will alter how you want to attack your opponents.
I personally enjoyed the Trip Mines, they will stick your opponents to the nearest wall while you deal with other problems.

Each gadget comes with a limited number of uses, and must be replenished by taking down enemies. Luckily, they can be upgraded, allowing for more uses and additional power.

Loads of side missions 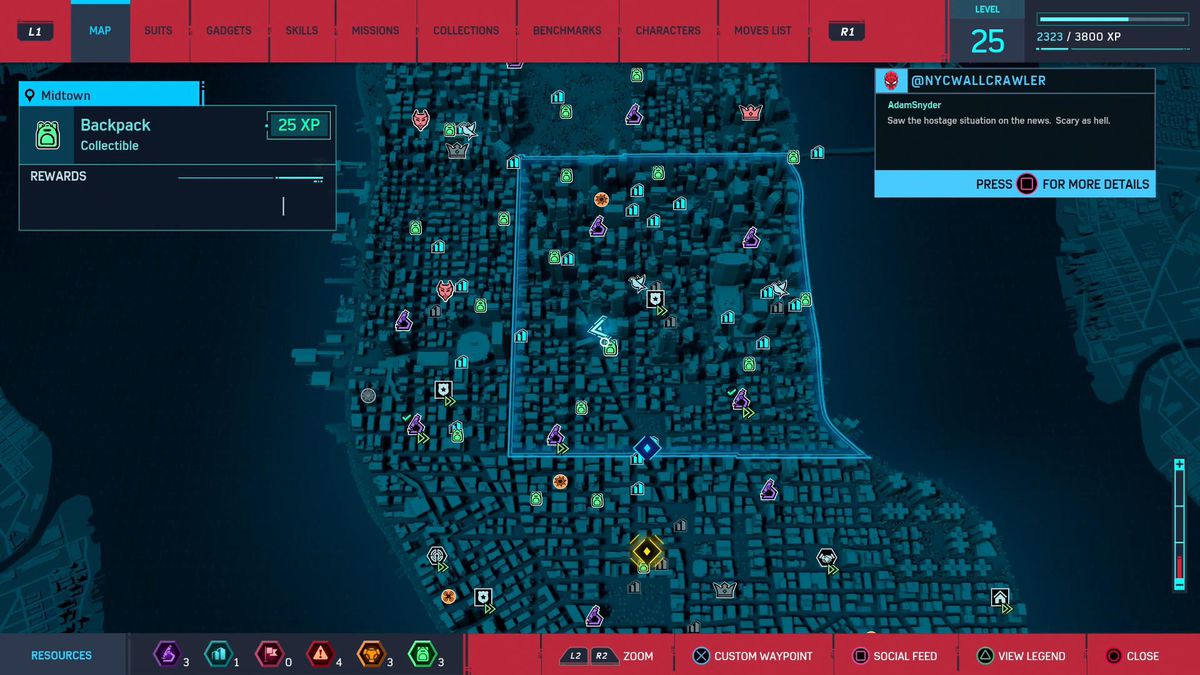 As with any open world game like this you can approach the main story line at your own discretion allowing you time to complete challenges, puzzles and side missions. Completing each mission will earn you a token, that you can use to upgrade your gear.
Clearing enemy bases earn Base Tokens, taking photos of listed buildings get you Landmark tokens while taking down local criminals will get you Crime Tokens. Specific gear requires a certain number of each token so just zip around for a while taking a few pics and cracking a couple skulls to seriously upgrade your kit.
Each side quest is listed on your in game map, all you have to do is track down the local police station to reveal everything in the area. Each district has 2 or 3 stations, on finding them you have to “hack” into the tower and badabing badaboom you have your map ready to rumble.
Alongside these mini missions there are also a couple of mini journeys that are split over a few missions with a self-contained story that has you interacting with characters that aren’t crucial to the plot of the campaign.

Just from the pictures taken from the game we think you will agree, this is a truly spectacular looking game. The Amazing Spider-man was designed to maximize the potential in the PS4 Pro’s 4K abilities with each character created in superb detail (just look at this close up of his costume, the detail is so good you can almost feel it). Facial expressions, wrinkles, eye detail the game has it all, rarely do you see a game with such detailed graphics that the transition from cut scene to game play is completely seamless.
Sure the characters look brilliant but that isn’t a scratch on the scenery. The island of Manhattan is rendered in such a way that skyscrapers offer an exceptional level of detail (crawl over a random window and you’ll actually be able to see into the apartment, it’s not creepy I promise). As I said the game was designed for a PS4 Pro but it doesn’t loose it’s detail on the standard console resolution due to a resolution of 1440p at  30fps frame rate, which is then up scaled to 4K. This is as a result of a thing called dynamic resolution scaling that changes the fine details depending on how frantic the action is at any point in time.

I wanted this game to work so badly and thankfully it was everything I hoped it would be and more. The story line is so immersive, the cut scenes are to die for and the gameplay is downright deadly. Better yet the ending of the story leaves Insomniac games open for a follow up title which I already can’t wait to get my hands on.

If there is any negative to take away it’s this, despite the cleverly constructed side missions, none of these has any impact on the main story outside of unlocking a couple of power up options… that you can get by without. It’s a shame because the side missions really help bring Spidey’s New York to life so it would have been nice if they made any impact on the story.

That’s just me being picking though. Sail through the high rises of New York, smash the face of a few enemies and complete a bunch of side quests and generally feel like you are the Spider-man, what more could you want?