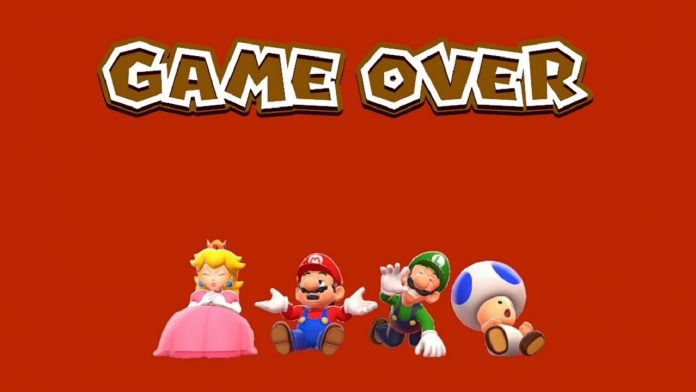 The King is dead; long live the King! So cried the residents of the Twittersphere on Wednesday the 31st of March. Mario has been killed off by his creators on his 36th birthday and the internet is up in arms. How could Nintendo do this? What does this mean for gaming going forward? Is the Mushroom Kingdom actually subject to some kind of 1984-type maximum age laws?

All seems a bit dramatic, doesn’t it? What really happened was the removal of the Super Mario 3D All-Stars (SM3DAS) collection from the eShop as well as traditional retail outlets. The collection of classic games is not available from Nintendo anymore and anyone wanting to play it now must settle for a second-hand copy. This seems like a bit of an odd strategy for Nintendo (and it is!) so why did they do it?

In September of 2020 Nintendo, during a special Direct, announced that they would be releasing a 3-in-one collection of Mario’s 3D games as a part of a celebration of the franchise’s 35th anniversary (yes, you are that old). The three games in question were Super Mario 64, Super Mario Sunshine and Super Mario Galaxy (Super Mario Galaxy 2 was suspiciously absent), as well as remastered soundtracks for each. As you can imagine, this was met with uproarious applause. Three of the most critically acclaimed 3D platformers all coming to the hottest console of its generation, some of which haven’t seen the light of day since their original release? What’s not to love?

People’s excitement was cut short, however, when it was announced that the collection would be removed from physical and digital stores after the 31st of March 2021 (a quick search of the eShop confirms that, yep, it’s gone). This seemed to fly in the face of the tone of the celebration. Here’s the most recognisable company in gaming celebrating the character that brought gaming as a medium into the mainstream and they’re taking him away from everyone to “make this year special”. Setting aside that the game was only on sale for 5 months, not the whole year, this makes no sense for a lot of reasons. It also feels like a giant, gloved middle finger to fans “We know you want to play these games again, but you had to be there. Tough luck”.

Let the Past Die

Many commentators were quick to point out that this is a very “Nintendo move”. Nintendo have a long history of letting the past stay in the past and only focussing on the future. As I alluded to above, Super Mario Sunshine was trapped on the Gamecube, despite the overwhelming love it gets from fans. It wasn’t even ported onto the Wii and Wii U’s virtual console stores. Even the Virtual Console itself, a store section that contained only games from Nintendo’s old systems, is a thing of the past now. The Switch only offers a paltry collection of NES and SNES games as a part of its online package and that’s it. If you want to play classic Nintendo games now, you have to buy a second-hand copy (and possibly a second-hand console) or resort to piracy. Compare this to other companies and you see how out of touch it seems. Sony have shown a lot of love to their big-name franchises, with PS2 classics like Jak and Daxter or Ratchet and Clank still available to purchase in the store, while Xbox have honored Master Chief’s legacy with Halo: The Master Chief Collection available through Gamepass. This is all without mentioning the fantastic remakes Crash and Spyro (two franchises that wouldn’t exist if not for Mario) got for their original trilogies.

So Greedy Wario Would Blush?

So why did this happen? Why did Nintendo decide to bring their ball home with them when their mum called them in for dinner? Money. That seems to be the only rational explanation people can come up with. However, it’s not as straightforward as you might think.

Of course, creating an artificial scarcity for a product will increase sales. We see this all the time with “Limited edition this” or “Collector’s set that”. Hell, the entire trading card industry is built on this philosophy. If something is only around for a short time, people will be more likely to panic buy it even if they don’t really want it. Such is the power of FOMO. Does this mean that Nintendo sold more copies of SM3DAS than they would have if it hadn’t been a limited release? Almost certainly not. By the time 2020 had come to a merciful close, the collection had sold around 8 million copies, with weekly sales increasing by 260% for the month of March. Let’s say, for the sake of argument, the game totalled 15 million copies sold. That’s still only half as many sales as some of the Switch’s top sellers (one of which has only been out for a year!). The latest Pokémon games sold 20 million copies between them; Smash Bros. has sold 22 million. Animal Crossing, which came out this time last year has sold a whopping 31 million copies! “But that’s comparing apples and oranges” you might be saying “they’re different franchises with different fanbases”. Ok then, Super Mario Odyssey, the plumber’s latest outing has sold 20 million copies, while Mario Kart 8 Deluxe has sold 33 million units. Taking Mario Kart’s Switch sales alone (it was also on the Wii U), it’s the 15th best selling game of all time. This has been helped by the fact that it was a Switch launch title, so literally anyone who buys a Switch can play it. If you don’t think three of Mario’s most beloved games would have seen similar support over the course of the next three or four years, I’ve got a bridge to sell you.

So, Nintendo potentially sacrificed long-term sales for short-term gain. Why? Well, there’s one theory that I think holds some water. With the damage the COVID-19 pandemic has done to the development of many games, Nintendo needed a way to reassure its shareholders that the company can stay afloat in a tough period. The increased sales from a limited release will give the company a financial shot in the arm ahead of the end of the financial year and give investors confidence in future risks (especially important if the latest Super Nintendo Switch rumours are to be believed). Nintendo has always put its shareholders first, something many Japanese companies do, and I think ultimately that’s the reason Mario’s 35th anniversary ended on such a sour note.

Will Bowser try it Again?

What does this mean for these games and for Nintendo going forward? Personally, I think the games are going to be relegated to Nintendo’s vault again. There are rumours flying every which way that we may see some individual releases on the eShop for a slightly increased price. However, there’s no evidence of this. I think the only way we’ll see these games on the Switch again is if Nintendo ever gets around to bringing more of their consoles to their Online offering. More worrying is that 2021 marks the 35th anniversary of The Legend of Zelda, my favourite gaming franchise. We have already gotten confirmation of a Skyward Sword remake coming in July, but will Nintendo pull another stunt as they did with Mario? Will they release a collection of beloved games only to take them away again? Nintendo of America President Doug Bowser (yes that’s his real name) said that this is a strategy they don’t intend to be “using widely”, but even that worries me. It’s not a flat-out denial that they’ll do it again. This is unlikely to be the thing that gets Nintendo permanently put in people’s bad books. They seem to be immune to that treatment if their reaction to the Joycon Drift scandal is anything to go by. This is just another way for them to make a quick buck at the expense of everyone who didn’t buy their product in time. Something we have unfortunately become very used to in the last 35 years.

So, don’t pick up Super Mario 3D All Stars today! You can find it at none of your favourite retail outlets, nor can you get it on the Nintendo eShop! Let’s-a not go!