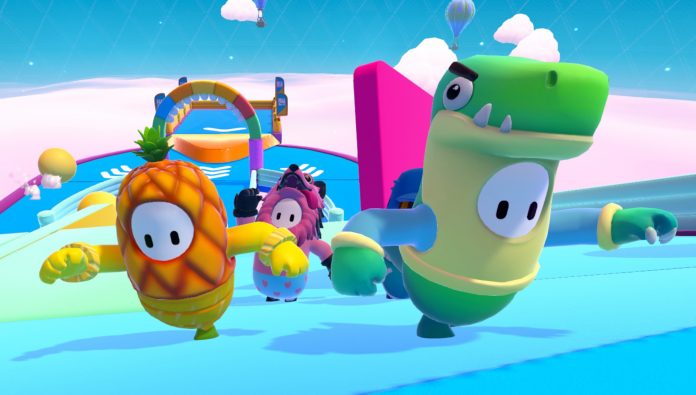 Every so often a game stands out from the crowd. Not because it’s got superior graphics, not because it’s got the longest story line in history and not because it’s got some massive price tag. Sometimes it’s the beautifully simple that takes center stage and that’s absolutely the case with Fall Guys: Ultimate Knockout. This title is currently free on the PlayStation Network and while it may seem like another Battle Royale game it really isn’t. Think more Takeshi’s Castle. It’s colourful, crazy and a bit of craic.

Fall Guys: Ultimate Knockout, is bloody mental! Do we all remember that show Takeshi’s Castle? That’s the best description I can use to describe this game.

Since release the game has become so popular that the servers have been struggling to keep up and that’s really the only complaint I have about Fall Guys. Essentially 60 people go into the show and after a series of mini games that filter down the numbers 1 player is left victories. Handily each mini game has a clearly defined goal AKA get to the end of the course in the top 40, gather a pile of eggs for your team or whatever. The game play is also ridiculously simple, you jump, grab and bounce, that’s literally it. The game does a lot of things right, but the true genius of Fall Guys is that it isn’t about winning – it’s about not losing.

Not your Normal Battle Royale

Unlike the Fortnites of the world where you’re constantly trying to win, the main objective of Fall Guys: Ultimate Knockout is to just not be in the bottom group. Well kind of. Of course you’re trying to win but most of the game is spent just trying to get by. Genuinely I’ve tripped, slipped, and stumbled my way to a 30th place finish to qualify for the next round by the skin of my teeth.

This makes for mighty craic, especially if you are playing with your mates online because it matches the funny with ultimate frustration – not gonna lie I watched my niece she’s like 4 get through a round, how I don’t actually know. But it means there is so such thing as a bad game, it’s a level playing field that’s not dependent on you finding better weapons crates than your opponent. Fall Guys: Ultimate Knockout is one of those titles where the line “just one more game” means the exact same as “sure I’ll come for 1 pint” we all know how that ends.

Getting stuck behind a pile of idiots at a door, falling of a see-saw or getting nailed by a banana at the very end of a sloping run are all sure fire ways to wind you up. Overall Fall Guys: Ultimate Knockout is all about that quick and simple fun and regardless of your skill level, you will eventually win a game of Fall Guys – well I’ll tell you when I do eventually win one.
Look the game is free and that means there will be bugs. Team games are an annoyance,  and they can be so difficult to win if your team is incompetent. Which as with any team game will happen more often than not. You’ve also got some mini games that are brilliant in theory but aren’t so great in play…for example Tail Tag. It may be down to the pressure on the servers but there are times you know you’ve grabbed a tail but nope nothing. But that’s a minor inconvenience when 25 mini games and most are brilliant fun, but there are absolutely some games that you can take or leave.

Other Bits and Bobs

Not unlike Fornite or PUBG, the future of Fall Guys is totally dependent on what they do next. It’s only out a couple of weeks but so far the signs are good with the first mini game update completed about a week ago. Naturally with any of these games it’s all about the skins and more are set to come in the future.
These skins you buy using things called Kudos & Crown currency, something you cant buy with real money so in order to buy the goodies, you gotta put in the work. My avatar is currently dressed like a chicken, simply because I can. Oh and Kudos is easy to gather by just playing the game means you can usually afford everything you want without paying any real money.

Fall Guys: Ultimate Knockout is a face paced, frantic and fun title that anyone can pickup and play. Games can run for 1-3 minutes and when you get knocked out it’s easy to get back to the main menu and start a new game. While it’s great to play solo, create a party for you and your mates and watch all hell break loose.

Yes sure the servers are a bit iffy at the moment and we presume some more mini games will be released in time to help keep the title fresh but if I’m being very honest Fall Guys: Ultimate Knockout is one of the most fun games I’ve played in a long time.

The shenanigans and wild visuals give Fall Guys an identity that is entirely unique and the fact that it’s not quite a battle royale makes it, for me the surprise hit of the year