Have you ever fancied yourself as a bit of a Steven Spielberg? Or maybe you’ve had this idea for a story that you’d just love to tell. There’s nothing stopping you creating a little bit of cinematic magic and now, thanks to the Dublin Smartphone Film Festival, you can put it out to the public too.

What is the Dublin Smartphone Film Festival?

The Dublin Smartphone Film Festival is one of the most exciting events to enter our diary this year. Just a few years ago, to be any sort of filmmaker, you needed some expensive kit. Today, you’re likely to already have a phone capable of capturing great video. That’s why we’re really excited to partner with the first Dublin Smartphone Film Festival and cannot wait to see what entries are submitted by the public.

What You’ll Need to Enter the Dublin Smartphone Film Festival

To give you a little encouragement and maybe even spark some creativity, here’s our quick start guide to entering the Dublin Smartphone Film Festival.

You might already have an idea and that could idea could even be the reason you’re entering the competition in the first place. If that’s the case, congratulations, you’ve got one of the hardest parts of creating a film boxed off.

If you don’t have an idea, don’t fret! While this can be tough, if you’re working with a blank canvas, it’s also incredibly fun. The best thing to do is grab a pen and paper and just write what comes to mind. If you’re drawing a blank, Reddit has the perfect solution; a subreddit completely dedicated to writing prompts. You might not end up creating a film on these ideas, but it might get the brain juices flowing. Here are the categories you’ll need to squeeze that idea into:

Fun fact: The vast majority of Goos3D’s videos are shot on smartphones. This particular video was shot on the Samsung Galaxy Note8, granted that was with a green screen! What I’m trying to show is the quality of smartphone video these days. Smartphone cameras are so good that you won’t need a camera better than what you’d find on a smartphone. That’s why the Dublin Smartphone Film Festival won’t accept footage shot on the likes of a GoPro.

You can edit your film on your smartphone or either a desktop or laptop. If you have a MacBook, there’s a good chance you’ve already got iMovie which is a great piece of software. Windows users are in a similar situation with Windows Movie Maker being a freebie. But again, just like smartphones disrupted the hardware side of filmmaking, they’ve done the same for video editing software.

My personal favourite is KineMaster, which is available for both Android and iOS. It’s massively powerful and is free. There’s very little you can’t do with this app that you can do with some of the top software out there and to think you can do it all on the bus is madness!

The only catch is the KineMaster watermark will appear on your video unless you fork out for the premium version which costs €3.59 per month.

Entries are open right now and you can enter through the festival’s website and entry remains open until 1 December 2017. The event itself takes place in Generator, Smithfield on 27 January 2018 and to enter a film will set you back around €7.50 to enter which is charged as $10.

That’s all you need to have in order to enter the film festival. Sure, you’ll probably need some actors, but even some creative shooting can overcome that. While that’s all you need, we definitely recommend the likes of a tripod and smartphone holder. Along with that, some additional shooting accessories, including softboxes, are totally fine to use and might make your life a little easier.

You can use some additional accessories with your smartphone and the only we’d most recommend is a tripod of some sorts – you don’t want the audience to get seasick. Here’s a list of accessories we use to shoot footage for Goos3D, all of which we bought on Amazon.co.uk (Note: we may make a small bit of moola if you buy any of these): 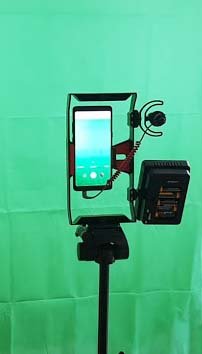 While most smartphones pick up pretty decent audio, a directional mic can make a massive difference. This mic will focus on recording what it’s pointing at, cutting out noise behind the camera. Nothing ruins a great video like bad audio. The only catch is that for this to work with smartphones you’ll also need to buy this cable.

Pick up the Rode VideoMicro on Amazon

This is a really flexible tripod – literally. It fits any phone I’ve thrown at it, including the Note8. The tripods flexible legs mean you can wrap it around railings, barriers and even tree branches to get the perfect shot. Of course, it’ll also stand up like a normal tripod and the phone mount can be placed on a larger tripod, making this a great investment.

Pick up this tripod mount on Amazon

There are countless rigs you can pick up which make holding your smartphone while filming much easier. I personally love this rig because you can mount it to a tripod on three sides and it’s got two ‘cold shoe’ mounting points (they are those spots on the top of a camera where you slide accessories in). Here you can mount the Rode mic from earlier or some additional lighting.

Pick up a smartphone video rig on Amazon

Lighting makes a massive difference, especially if you’re thinking of using green screens at some stage. I was blown away by the difference this little light made when green screening. It also comes with a flexible fitting compatible with ‘cold shoes’ and several colour filters. Combined with the smartphone video rig, it’s a really nice little gadget to add to your filmmaking studio.

Pick up a mounted LED light

I can’t stress enough that while these accessories are great, they are all just nice to have. We’ve built up this collection of gear over a year or so. Individually, none of them will break the bank but at the same time, you don’t need anything more than an idea, a smartphone and some software to enter the Dublin Smartphone Film Festival.