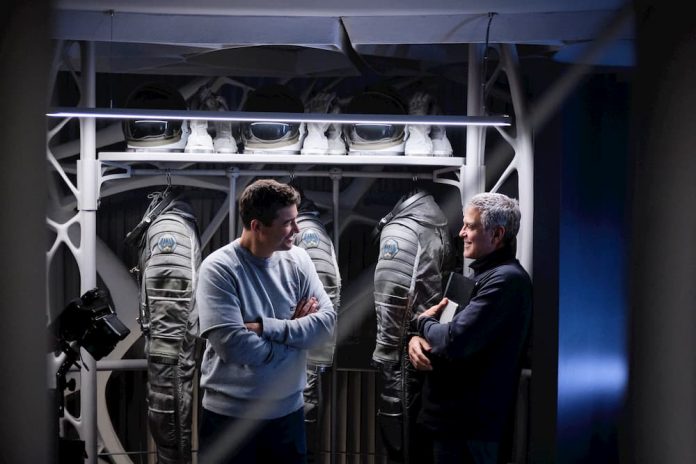 The weather is getting colder, the nights are getting longer (not a fan of it getting dark at 3pm) and the temptation to curl up on the couch and watch a good TV show or movie is very real. Thankfully, it looks like Netflix have saved the best releases for the last month of the year.

The streaming service has revealed what’s available to stream in December (and there’s plenty of really good options on the way). So grab the popcorn and settle in, here are 12 movies and TV shows to add to your Netflix queue this December.

Because ’tis the season to binge-watch TV and movies, right?

Let’s kick off with some series worth your while. You know? The things that leave you saying “just one more episode”.

The Holiday Movies That Made Us

When does it arrive? December 1.

Unwrap the real stories behind these iconic Christmas blockbusters, thanks to insider interviews and behind-the-scenes peeks.

When does it arrive? December 5.

A tormented student uncovers unsettling secrets at her remote high school as betrayal and a paranormal encounter upend her life.

When does it arrive? December 10.

A video-game-obsessed young man finds himself in a strange version of Tokyo where he and other visitors must compete in deadly games to survive.

When does it arrive? December 14.

When an attack brings down the star student at an elite ballet school, her replacement enters a world of lies, betrayal — and cutthroat competition.

When does it arrive? December 18.

When love rings your doorbell, are you ready?   Follow Johanne through another December as she continues her pursuit for eternal, warm and real love. When her family and the world around her fall apart, how can she still believe in real and bottomless love? Does it even exist and will she find the one true love for Christmas this year?

When does it arrive? December 25.

Bridgerton follows Daphne Bridgerton (Phoebe Dyvenor), the eldest daughter of the powerful Bridgerton family as she makes her debut onto Regency London’s competitive marriage market. Hoping to follow in her parent’s footsteps and find a match sparked by true love, Daphne’s prospects initially seem to be unrivalled. But as her older brother begins to rule out her potential suitors, the high society scandal sheet written by the mysterious Lady Whistledown casts aspersions on Daphne.

Enter the highly desirable and rebellious Duke of Hastings (Regé-Jean Page), committed bachelor and the catch of the season for the debutantes’ mamas. Despite proclaiming that they want nothing the other has to offer, their attraction is undeniable and sparks fly as they find themselves engaged in an increasing battle of wits while navigating society’s expectations for their future. Bridgerton is a romantic, scandalous, and quick-witted series that celebrates the timelessness of enduring friendships, families finding their way, and the search for a love that conquers all.

When does it arrive? December 30.

In 1999, young Astrid saw a bus full of students disappear. In 2019, Astrid tries to solve this mystery, only to discover she ends up changing the past.

When does it arrive? December 31.

Over the course of Part 4’s eight episodes, The Eldritch Terrors will descend upon Greendale. The coven must fight each terrifying threat one-by-one (The Weird, The Returned, The Darkness to name a few), all leading up to…The Void, which is the End of All Things.

As the witches wage war, with the help of The Fright Club, Nick begins to slowly earn his way back into Sabrina’s heart, but will it be too late?

If you’re very self-aware and know you can’t be trusted to watch just one episode of anything, you might be safer committing to just one movie instead. Netflix has lined up an impressive list of new Netflix Originals to get you through the festive period.

When does it arrive? December 4.

1930s Hollywood is re-evaluated through the eyes of scathing wit and alcoholic screenwriter Herman J. Mankiewicz as he races to finish “Citizen Kane.”

When does it arrive? December 11.

Dee Dee Allen (three-time Academy Award winner Meryl Streep) and Barry Glickman (Tony Award winner James Corden) are New York City stage stars with a crisis on their hands: their expensive new Broadway show is a major flop that has suddenly flatlined their careers. Meanwhile, in small-town Indiana, high school student Emma Nolan (newcomer Jo Ellen Pellman) is experiencing a very different kind of heartbreak: despite the support of the high school principal (Keegan-Michael Key), the head of the PTA (Kerry Washington) has banned her from attending the prom with her girlfriend, Alyssa (Ariana DeBose).

When Dee Dee and Barry decide that Emma’s predicament is the perfect cause to help resurrect their public images, they hit the road with Angie (Academy Award winner Nicole Kidman) and Trent (Andrew Rannells), another pair of cynical actors looking for a professional lift. But when their self-absorbed celebrity activism unexpectedly backfires, the foursome find their own lives upended as they rally to give Emma a night where she can truly celebrate who she is.

When does it arrive? December 18.

Tensions and temperatures rise over the course of an afternoon recording session in 1920s Chicago as a band of musicians await trailblazing performer, the legendary “Mother of the Blues,” Ma Rainey (Academy Award® winner Viola Davis). Late to the session, the fearless, fiery Ma engages in a battle of wills with her white manager and producer over control of her music.

As the band waits in the studio’s claustrophobic rehearsal room, ambitious trumpeter Levee (Chadwick Boseman) — who has an eye for Ma’s girlfriend and is determined to stake his own claim on the music industry — spurs his fellow musicians into an eruption of stories revealing truths that will forever change the course of their lives.

When does it arrive? December 23.

This post-apocalyptic tale follows Augustine (George Clooney), a lonely scientist in the Arctic, as he races to stop Sully (Felicity Jones) and her fellow astronauts from returning home to a mysterious global catastrophe.

Not feeling any of them? Try out some of these secret Netflix codes to get you through the Christmas.