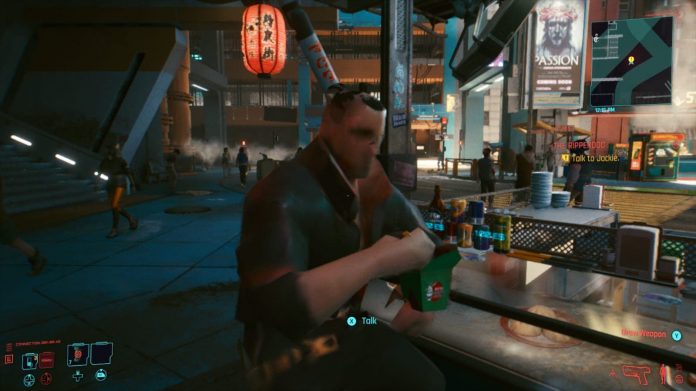 Yep. That’s the title of the review and also the ultimate conclusion of my Cyberpunk 2077 review too. I’ve had my Xbox One since… well I’m not sure, to be honest. It’s been a long long time though I do think it’s time I made the jump to the PlayStation 5. Anyway, my point is that in all those years of owning my Xbox I’ve never once had to find out if I could get a refund for a digital game purchase. I just forked out €69.99 for Cyberpunk 2077 and after a rough hour of trying to play it I turned to Google to ask if I could get a refund for games bought on Xbox.

Cyberpunk 2077 was, I’ll admit, a very ambitious game. It was even being touted by some as the game of the century. Now, I know what you’re thinking. “Marty, did you get overly excited by this game and it let you down?”. No, actually. I didn’t. Cyberpunk 2077 has been announced, teased and maybe even delayed since 2013 so many have been on a long journey waiting for it. Me? Well, I only really learned about it a few months back.

I’m not sure how it flew under my radar either. It’s everything I should want from a game. Dystopian, open world, guns and all that good stuff. Yet, it managed to completely fail to impress everywhere. It actually left me feeling a little ill and just generally stressed. I’ve never felt this in a game before.

I’m still rocking my Xbox One and haven’t moved to Next Gen yet, though I do plan to pick up a PlayStation 5 shortly after I get my COVID-19 vaccination. I do think it might be in that order!

When I booted up Cyberpunk 2077, I was underwhelmed. After a few minutes, I was disappointed and after an hour I was howling laughing. The graphics jump between bang average to god awful fairly regularly. This is a legit in-game screengrab that I captured. N64 GoldenEye fans – this is for you.

I don’t know whether to cry or laugh. Just before I went looking for my refund I checked out if this was just me and it’s absolutely not. I’m not sure how this happened with a game announced seven years ago, but it appears that Cyberpunk 2077 got Keanu Reeves on-board and rushed the game for Christmas 2020.

Remember I said I’m a big fan of the whole dystopian genre? Well, I won’t lie. I had hopes for this game to be a bit of a Blade Runner instalment. A game I played to death when I was younger was the 1997 adventure game adaption of Blade Runner. My good friend Jamie is also a big fan of that game and he passed a remark which I’m still giggling about.

When you take into account how far we’ve come with technology, I agree. The 1997 Bladerunner game is more impressive.

Of course, there’s more to Cyberpunk 2077 than slow rendering graphics, but when they do render perfectly, they’re still unimpressive or downright disappointing.

I’m not going to keep going on about it, but for this screenshot, I stood in the same spot. Waiting. Waiting for everything to get better but instead, I was thrown back to my memories of my Xbox 360. It’s left me wondering where the Cyberpunk 2077 Twitter account is getting their renders from because they’re substantially better. PC I’m guessing based on this Tweet.

The worst thing is that it doesn’t end there.

I’m not trying to hide the fact that I only played this game for about an hour. It’s literally all I could stomach. While the graphics were the first thing to leave me with raised eyebrows. The gameplay isn’t much better. In fact, in might be worse.

It’s usual for games to bring you through some tutorials and the likes at the start, but I felt so super unengaged with Cyberpunk 2077’s attempt to learn the controls and gameplay features. While these bits are often a bit boring and repetitive, this intro felt totally laboured and drawn out. Lots of reading and still bits of explanations not clear left me fairly confused as the game started.

I wasn’t all that clear about what the story line was to be either.

I was going to lump this into gameplay but let’s address this separately. The dialogue is awful too. The voice acting left me, again, feeling like I was watching a poorly directed movie. I saw there’s an option to skip forced sections of dialogue but I resisted. Simply put, I was trying to give this game every chance in the world to not be awful

But nothing could save it. The graphics and renders, sure, maybe a update patch could fix that. Nothing is going to fix the gameplay and dialogue.

Only one thing remained. Could I get a refund?

Getting A Refund For Games Bought On Xbox

Like I said, I’ve never had to look into this before but Cyberpunk 2077 left my massively disappointed. I was immediately looking into how I would get my money back. I know Steam allows refunds on games within the first two hours of gameplay. So I looked into it.

I found a refunds page from Microsoft for digital purchases. All I had to do was log into my Xbox account using the same details as my console and request a refund. It’s not clear what requirements I met to trigger the refund but it was quick. I received an email saying the support ticket was open after my refund was processed.

One thing which is made clear on the page is that purchases outside of 14 days rarely qualify for refunds. So if you’re left with severe buyer’s remorse after downloading Cyberpunk 2077, here’s your way out.

I take zero pleasure in writing reviews like this. I can only imagine the unbelievable amount of work that it takes to produce a game over seven years. I’m sure there’s been massive pressure and no-one in CD Projekt Red set out to make a poor game. But, at the same time, I was left gutted that I’d parted with €70 for this. In fact, if it weren’t for the money I wouldn’t have lasted as long playing it as I did.

This is a massive case of buyer beware. Could this game be better with a patch? Maybe. Is it ok on PC? I’m not sure. The good thing is that you might be able to get a refund if you simply can’t resist it. But if you’re thinking that you’ve found the perfect Blade Runner and Fallout mashup, think again.