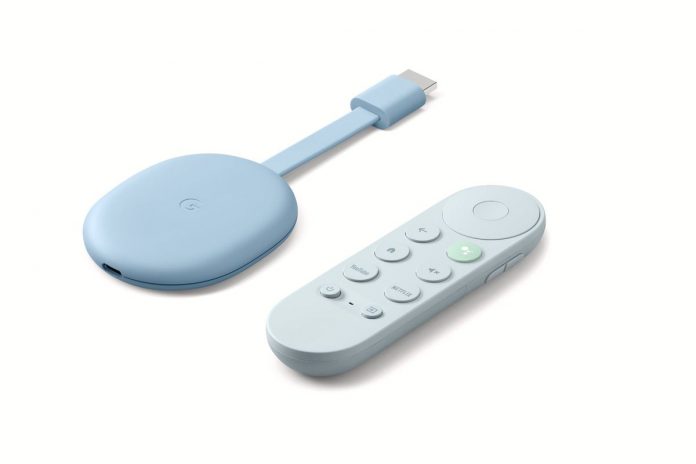 There is a new Google Chromecast TV out and while the previous renditions of the Chromecast were nearly perfect, this years model improves across the board, mainly due to the new snazzy control and the brand new Google TV software. This year like the Amazon Fire Stick we see a new dedicated TV interface alongside your usual casting options, this way you have instant access to all major streaming services like Netflix or Disney+ On top of that, there are a number of apps that have been carried over from Android TV, Google TV’s predecessor, that bring games and productivity apps to the streamer.

The result is a new and improved streaming device that might resemble its predecessors, but which offers a whole new experience that’s more user-friendly than ever before.

The Chromecast with Google TV is available right now in White, Sunrise Peach (basically pink) and Sky Blue, and its going to be rocking the shelves at €70 a pop which is about €20-30 more expensive than the previous model. I think that means the Amazon Fire Stick is currently a little cheaper at €65 and a bit cheaper than most Android Tv solutions.

That means that the new Chromecast with Google Tv can stream in 4k HDR making it better than the base Chromecast but the lack of Stadia support means it’s probably not as good as an all rounder as the Chromecast Ultra…yet. Stadia support will be coming in time so if the only thing stopping you upgrading your cast is the inability to play games, I wouldn’t be too worried about it.

The Google Chromecast’s have had a very similar design for the last 3-4 years and this year is no different. In the Chromecast with Google Tv we get the now standard design albeit in a more ovular design. As ever you hook the Chromecast up to your tv set with the attached HDMI cable and it get powered either by the wall outlet or a Tv USB port if you have it and sometimes that won’t even work if the USB cable can’t get enough power from the TV.

Also unlike the Chromecast Ultra there is no Ethernet port on the new device meaning this device will only ever work of Wi-Fi, again fine if you have a semi decent internet connection. Now according to Google you will be able to get a USB-c to ethernet adaptor if you need it. But you do get a really really nice remote.

The control is a lovely Bluetooth IR setup, with its circular keypad area, volume control and a bunch of tidy buttons, you can set the remote up to work the TV as well as just your Chromecast with Google TV and of course it comes with an inbuilt Google Assistant. The voice remote can be set up to control your TV, receiver or sound bar. You’ll be guided when you set up your Chromecast. By default, the TV Input button will turn on your TV and switch active input to Chromecast. You can set up the TV controls later if you skip it during setup or modify settings by following the steps below.. 1. Go to Settings > Remotes & Accessories > Set up remote buttons. Setting up Chromecast is incredibly easy:

Well if you haven’t guessed by now the Chromecast with Google TV is all about the Tv experience and this is all about catering to that Android audience. You need to login to your Google account on the device which gives you access to YouTube, YouTube Tv, Playstore, Photos, Nest products and the Nest range of products. The Google Assistant just works with the setup to be honest and if you’re the type that’s a bit concerned about privacy when it comes to voice products, rest assured the Google Chromecast with TV only turns on when the button on the remote is pressed, and you can outright disable the service when logging in with your Google account at startup.

When you login to your Google account the home screen will pull up the Chromecast UI with a bunch of relevant and recommended content based on your information. What I mean is that in the one bar you will have your suggestions from Netflix, Disney, Amazon or whatever streaming services you use, all in the one place.

If you keep scrolling past the recommended content you will find the content broken up like any streaming service with bits and pieces broken up by genre, trending content, movies and tv shows as per the usual. Then under the for you tab you will find your full app library and beyond that you will have a live tv area which you only get if you’re a YouTube Tv subscriber, which you can get a free trial for on the Chromecast for TV.

The interface isn’t revolutionary and can feel a bit basic, but those are really our biggest complaints about it so far, otherwise Google TV seems easy-to-use and with 6,500 apps available you should be able to find what you’re looking for. Unless of course that’s Apple Tv which is unsurprisingly not supported.

Like everything by Google these days the Chromecast with Tv just simply works, and it’s more than a rival for your Fire Sticks of the word. So even if you’re in a place with low bandwidth your streaming should still work a charm. There’s literally nothing about the performance on the Chromecast that I can knock. The only slow part of the process is actually the initial software installation but it wasn’t half bad at all.

Speaking of not half bad, Google TV can stream in both 1080 and 4K HDr with added support for HDR10+ and Dolby Vision which is class and when it comes to sound the Chromecast supports DTS, Dolby Audio, Dolby Digital Plus and Dolby Atmos format as long as you have a capable television setup. While to get your streams in the most high end format you should use the inbuilt tv apps rather than stream from your phone and casting but if you want high speed you can still hop the screen from your browser, Android or iOS devices as per usual.

The Google Chromecast with Tv is a complete new addition to the whole Tv streaming game and for €70 it great value for money, especially if like me you have a few other Google Home devices. The remote is slick and just works, the interface is simple and sexy and the audio being able to follow you around the gaff with your other Google Nest Audio devices is a real added bonus.

If you’re in the market for an easy to use streaming device, the added remote makes it so that the least techy person in the world can figure it out. Trust me I got that exact person to give it a test drive. You’ve always had options for 4K HDR streaming but many of them cost far more than the Chromecast with Google TV. If your wallet is already exhausted from buying a 4K TV, Chromecast with Google TV is a great way to recoup some of your spending.

The only downside is at the moment if you are a Google Stadia gamer, you won’t be able to hook up with this device for the time being but that is expected to come next year. So stick with your Chromecast Ultra for now if that’s the case.