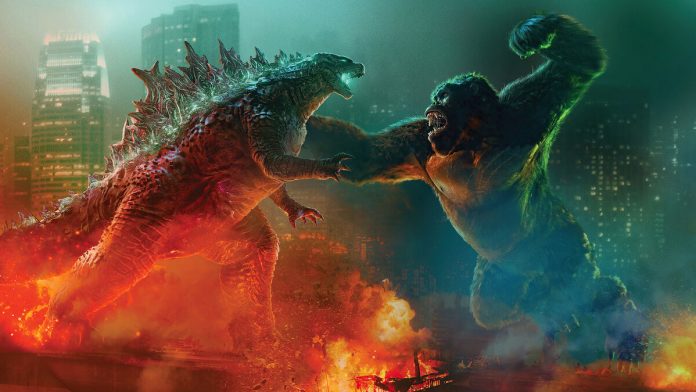 The biggest movie of the year is here. Literally. Godzilla vs. Kong is the latest movie in Legendary’s so-called Monster-verse, and it promises a showdown we’ve all been waiting for since… well since the last time it happened actually. That time, the 8th wonder of the world had to be given special electro-shock abilities to combat Godzilla’s atomic fire-breath; this time all he needs are his fists, and his ability to use tools. I’ll do my best to refrain from major spoilers but there’s one major point that I’ll have to go into to truly do the movie justice. So, does this movie measure up to its stars? Or is it more like the goofy head of King Gidorah from the last film?

On a surface level, the plot of the movie is quite simple. Godzilla’s and Kong’s species have a millennia-old rivalry that flares up every now and then. The ensuing battle will only end when one titan either yields or dies. No more explanation needed. However, as with all these movies, there’s a deeper plot that involves the human world too. In a nutshell, a billionaire tech mogul (whose name I honestly couldn’t remember by the end of the film) wants to find Kong’s homeland in the center of the Earth because he believes it holds a secret power source that could end the world’s energy crisis (and he definitely won’t use it for any nefarious purposes at all). To do this, he recruits a scientist whose brother once ventured to the Hollow Earth but died on the mission. This scientist then theorises that Kong should be able to lead them to his homeland due to Genetic Memory. The only trouble with this is that this necessitates Kong being moved from his home on Skull Island which will alert Godzilla to his existence.

Meanwhile, Godzilla has gone rogue. Yes, the titan once hailed as the King of the Monsters and Saviour of our City has been attacking Apex Cybernetics facilities (which are owned by Mr. Billionaire) around the globe, seemingly turning on the people he once fought to protect. During one attack, an Apex employee discovers that the company has been working on an enormous, off-books project and vows to find out what it is.

The employee in question is Bernie Hayes and, quite fittingly for the year the film released, he’s the host of a conspiracy theory podcast. Practically every insane idea gets mentioned at least once in this movie from the aforementioned Hollow Earth and Genetic Memory ideas to the Illuminati. He even suggests that the Nazis intended for fluoridated water to be used to control people’s minds. Be prepared for a lot of poking fun at these kinds of flights of fancy throughout the movie.

One of my favourite things about the Monster-verse is the sound design. Even the old Godzilla movies had this nailed. The original Godzilla roar from the 1950s is, to this day, one of the most iconic sounds in cinema. This movie is only too happy to follow in the footsteps of the films that came before it and offers a best-in-show experience. The rumbling of Godzilla’s spines, while he’s charging his atomic firebreath, is top-notch as always, and Kong’s roar is even more primal and bestial than it was in his stand-alone flick a few years ago. I watched this with a good friend of mine who had a much better setup than I did. During one scene in particular the subwoofer was working overtime and causing some DVD cases on top of it to move. If you’re watching this movie without at least a soundbar you’re doing yourself a disservice.

The visuals are similarly impressive. The Monster-verse films are great at giving a true sense of the awesome scale of these titans and GvK is no different. Godzilla is almost always in an urban setting (or at least one with manmade objects to provide reference) so the wide, establishing shots of his appearances are always a joy to see. Kong, on the other hand, is a little tougher to size up. I feel like this is due to him usually being in a natural environment or, in the hollow Earth, in an environment that’s designed around his size. Don’t get me wrong, he does get a chance to measure up but if you hadn’t already known that he’d been up-scaled for this movie you’d be forgiven for wondering how he’d measure up to the King of the Monsters.

The CG in this movie is top-notch in my opinion. Admittedly the opening close-up shot on Kong’s hand is a bit iffy but that’s a 3-second exception to this otherwise fantastic film. This is the first Godzilla film (in this continuity) to feature him prominently in daylight and it’s a great change. Usually, a director will use the cover of night to cut down on some CGI costs, or obscure aspects of a scene that may be poorly done, but even the night-time scenes are well lit. The final fight takes place in Hong Kong (arguably giving the ape a home-field advantage) meaning the neon and glaring lights on the skyscrapers make the showdown feel like some kind of synth-wave nightmare in the best possible way.

I do love this movie and I would absolutely recommend it to anyone who wants 2 hours of in-your-face action and entertainment. However, I do have a couple of complaints. My number one will be the same as all of these films; we don’t care about the humans so stop showing us little details to try and make them more sympathetic. Maybe this is just me but the idea that Bernie’s world-saving drink was given to him by his late wife doesn’t add anything to the plot, nor does the fact that one of the Apex employees sent to the Hollow Earth is the Billionaire villain’s daughter. Thankfully, this film doesn’t pull away from the action at any point to focus on the human stories as the previous films did. That’s a big step in the right direction.

Secondly, I can’t help but feel that this film played it too safe. King of the Monsters was something of a box-office flop, barely making back its budget. I think there were a lot of things planned for this movie that were cut in order to make a more bankable film while minimizing hype for a sequel if it didn’t perform. For example, the pilot of Mechagodzilla was the son of Dr. Serizawa from previous films. This is never explored but could have been initially proposed as a “Godzilla killed my father”-style revenge story. There’s also no post-credits scene or any hint that there may be future films in the franchise. Seeing as this movie has outperformed its predecessor already and is the highest-grossing movie from a Western movie studio, I think we can be hopeful of more monster mayhem in the future. This would be a disappointing way to leave the franchise and is an indication that there’s certainly an appetite for more titan fights.

Definitely give it a go

There’s nothing I can really say to sell this movie beyond “you get to watch enormous creatures duke it out for dominance”. If that doesn’t grab your attention in some small way, then this film definitely isn’t for you. If your interest is piqued, however, you’re in for one hell of a ride. You can check out Godzilla vs. Kong on Now TV. Sky Cinema and HBO Max (for all you VPN users) right now. You can also check out director Adam Wingard’s Reddit AMA right here if you want to know more about the behind-the-scenes work!