We know, we know we are late to the boat on this one. But in all honesty we felt that we had to really delve deep into the Crash Bandicoot NSane Trilogy to bring you the best review .

2017 has been the year of the remaster, they are everywhere we look and you either love them or hate them. I personally love the little trip down memory lane. Crash Bandicoot I was brought all the way back to the simpler times of childhood and the humble PS1. Remember Crash was so popular back in the day that he became the unofficial mascot of the PlayStation. The only downside here is that it has taken Activision 20 years to bring our favourite titles back to life (prize if you can guess the names of the original 3 games)

I must admit I had this pre-ordered for a long time before it finally hit the shelves. When the download finally dropped it felt like Christmas 1998 all over again. The graphics have been given a lovely touch up with a sexy modern look that won’t feel out of place on the PS4. Better yet Crash still harks back to the nostalgic memories of the previous incarnations. Look it’s no Battlefield or Fifa but that is beyond the point, Crash Bandicoot is back an that is all that matters. 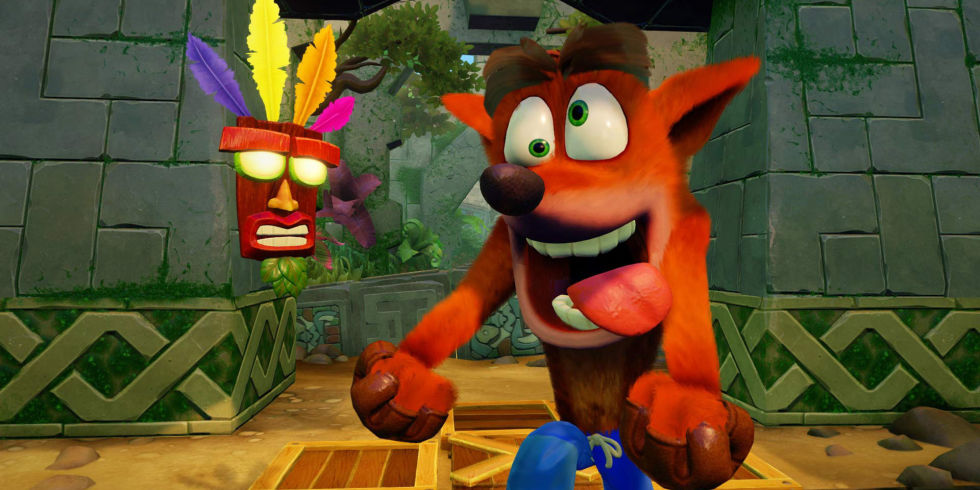 Having said that, the new update stands up to scrutiny although it may have been nice to have a couple of new levels. Guess that was just too much to ask. Crash doesn’t look out of place on the PS4 which is a nice novely. Just don’t get your hopes up. The game is exactly as it was back in the day minus some control tweaks which might see a controller fly across the room every once in a while.

Unlike Mario or Sonic, Crash was born into 3d when he arrived on the scene in 1996. Jesus that’s a long time ago now, in fact it was actually outsold by Super Mario 64.. if you remember that just take a moment and marvel in the fact you lived during the gaming golden age. Without a shadow of a doubt the NSane trilogy is fun, especially given how straight forward the control system is versus modern games. The levels in themselves are so fast paced and mental its almost blink and you miss it. Or in my case repetitive falling into the same chasm. But sitting back with the 90s Spotify playlist on and completing a level with that big dopey smile on your face, totally worth it.

While it’s only happened once to me, there is a a sweet satisfaction when you fly through a level without a mistake. You fall in love with the game when it happens. So much so that you will find yourself saying “one more go couldn’t hurt” and suddenly it’s 4am. Story of my life!

As with everything, here comes the downside.  While the game is a great laugh there are times when it can drive you NSane … Waheeey. Activision have admitted to tweaking the controls to make the game that little bit more challenging. We wish they hadn’t  as with some obstacles that you will never see coming you become reduced to a trail and error method to complete some levels. To be perfectly honest I gained a few grey hairs (not even joking) and the poor dog got told where to go on more than one occasion as a result.

Trying to attempt some of the jumps requires pinpoint accuracy or large amounts of luck which can be a pain. Seeing Crash fall down the same hole over and over again just because he won’t jump exactly where you want him to jump is no picnic. Expect the inevitable freak out. You will probably turn off your console more times than you could imagine. Yet every time without fail you will find yourself returning for just one more game… Half the fun if you ask me.

What does this all mean?

Basically if you weren’t a Crash Bandicoot fan back in the day then probably don’t bother starting now. But if like me this was your thing the chance to revisit your childhood is just too good to walk away from.

Despite the lack of improvement, the dicky jump control and the repetitive nature of some of the levels you can forgive all these for the joy and smiles they generate. ( my 18 year old sister even gave it a crack) So forget paying rent, bills and any of that other adulating nonsense and jump right back into the vortex of your childhood .