Home Reviews Gadgets Best Sodastream To Buy In Ireland: Where To Buy Refills And More 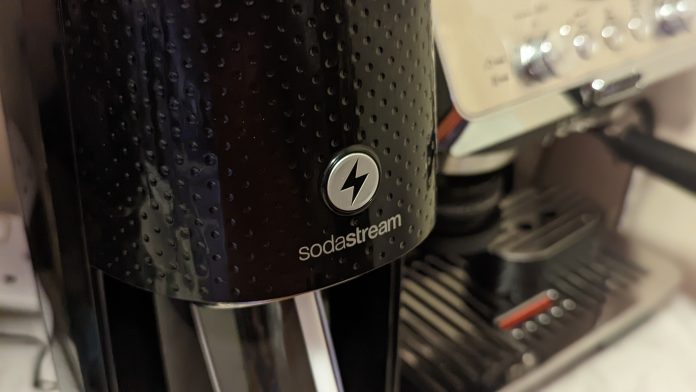 Maybe it wasn’t a thing for every family, but Sodastream was a massive thing for me growing up. My family wasn’t fancy, quite the contrary. So, looking back it’s almost a bit odd that my grandparents’ house had a Sodastream. Sparkling water and flavoured drinks were surely an unusual indulgence back in the day. But still, it was there and having a press with cola flavour in it is another childhood memory. Sodastream is enjoying a “resurgence” in pop-ularity, if you’ll excuse the puns, but here’s which Sodastream machine you should buy, where to get it and, perhaps most importantly, where you can get gas refills.

Sodastream is primarily a machine that lets you carbonate water. The system uses a gas canister of CO2 and a bottle locking system to inject CO2 into the water, making it fizzy. Whether you like drinking Fanta, Coke or just sparkling water, carbonated drinks play a part in your life. Sodastream is a way to make your own drinks back home, whether it be water, generic flavours or flavours created by Sodastream themselves.

Sodastream is was founded way back in 1903 and one of the biggest things to happen in recent years was Pepsi taking ownership in 2018. That means you can now also buy Pepsi and Pepsi Max syrup and make your own drinks at home. I like a bottle of Pepsi Max with my Zambrero burritos and now I just make my own drinks at home.

There’s one primary reason behind why I like Sodastream; the planet. I was buying bottled sparkling water because tap water in Dublin was horrendous. It took me a while to realise the best solution wasn’t buying bottled water (and lugging them from Lidl every week) but to get a filtration jug and Sodastream. Now, every week we’re buying less plastic. You can also have a range of flavours on standby to make a drink to cater to your tastes and even needs (I’m thinking tonic for gin).

Which Sodastream Machine Is Best?

There are a surprising number of Sodastream machines on the market. I say “surprising” because the concept is simple, right? How many ways can you inject gas into a bottle of water? Well, the answer is loads. It’s difficult to say which one works best because they all achieve the goal of making sparkling water. They just do it slightly differently

Sodastream One Touch: The Electric Sodastream

This is the smartest of the Sodastream machines on the market. The Sodastream One Touch is the only machine that needs to be plugged in and that’s to power the single-press mechanism. In the box, you’ll get two large and one small bottle. Fill this with water up to the line on the bottle. I fill mine with eco-friendly water filter because the water in Dublin is gross until you filter it.

As I said, I’ve had a Sodastream machine for years so I was using quite an old model. Newer machines have a really cool quick-lock system so you don’t need to screw bottles in. Just push it up and push it forward to lock your bottle of water in.

On the top of the Sodastream One Touch are three buttons. The more gas that goes into the water, the stronger the fizz. These buttons let you control how fizzy your water or flavoured drinks are. Press once to wake the machine and press again to make the fizz happen.

Is Sodastream One Touch Worth It?

The Sodastream One Touch appealed to my inner nerd that insists on everything being more than a bit gadgety. I like being able to press the button then wash up a glass or go to the fridge to grab flavour while my water carbonates. But, while I like this I don’t think I’d pay extra for it.

After attaching a fresh canister, my kitchen turned into Niagra Falls. I like fizzy water, so I was using the highest setting – a mistake for a fresh canister of CO2. Now that I’ve dialled it back to just the low-level carbonation, the water is still perfectly fizzy for me but I do wonder what’s the point in the other two settings. I also had to buy an adapter to add extra power beside my coffee machine.

It also got me wondering if the automatic carbonation uses more gas than I would normally use by manually surging the water, as I did with my old machine.

One massive point worth highlighting is that Harvey Norman is currently selling the Sodastream One Touch for just €119, which is €35 less than the regular RRP of €159. But there are other options.

The Sodastream Spirit is totally wireless and doesn’t need power at all. You can put it anywhere you like in the kitchen, even that awkward corner without a plug. You also have greater control over the gas used because it’s down to as many times as you press the button on top of the machine.

The Spirit is a simple machine that does everything most people will need to get up and running with home carbonation. It’s more than enough to start making core memories with your kids. The machine is also reduced in Harvey Norman, selling for just €99, down €34 from €134.

The Crystal is the most expensive Sodastream on the market at €149 from, you guess it, Harvey Norman. The whole idea with this machine is premium. That’s the feeling you get from the glass bottles. They look nice on a table for dinner guests and the bottles will last longer than the regular plastic Sodastream bottles. Still, the machine does everything the Spirit does in terms of making water fizzy.

The Verdict: Which Sodastream Machine Should You Buy?

I was also a bit surprised that the One Touch was wild with new gas cylinders. You can remove all risks of water gushing everywhere by sticking to the simpler Spirit machine.

Where Can You Buy Sodastream Gas Refills In Ireland?

This is one final point I have to make on where you can buy Sodastream refills in Ireland. They can be tough to find so I recommend you find somewhere nearby before you commit to the home carbonation lifestyle. You might hazard a guess that Harvey Norman sells spare gas bottles and a new canister costs €30. Right now, there are no cheaper refills on their website. I pick up my own Sodastream refills from Argos and they’ve constantly stocked refills for years. A refill from Argos will set you back €19 with each gas cylinder making up to 60 litres of sparkling water.