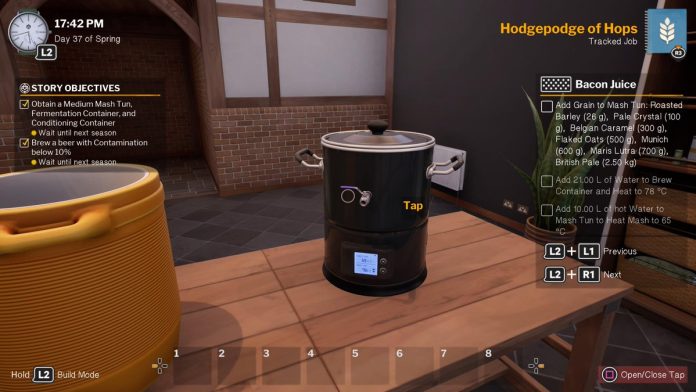 Earlier this year, I got into brewing. I got into it in a big way. Still, I’ve only managed to recently brew my fourth beer. It’s a time-consuming hobby. But it’s really rewarding. Because of the time, it takes to brew, I was excited to see Auroch Digital announce Brewmaster, a brewing simulator (game). Is it a game? Or is it a simulator? Well, I recently brewed an Irish Red Ale in real life, and now I’ve brewed it in Brewmaster too.

I had been playing around with Brewmaster for a few hours. I had been working my way through the story. This involved mainly extract brewing kits, a big step in learning brewing that I skipped completely. Instead, I went into all-grain brewing. Fortunately, Brewmaster opens up features pretty quickly in story mode. I still hadn’t unlocked an all-in-one system like the Brewster Beacon system I use in real life, but I did have enough tools to try my real-world recipe in Brewmaster.

Planning the recipe involves picking grains, hops and yeast. You also have to decide your batch size. The first thing I learned is that a lot of hops and grains are actually still under copyright.

There were some surprised faces at my local brew club, Capital Brewers, when I mentioned my use of Nelson Sauvin in my red ale. That’s an expensive New Zealand hop protected by a patent. For that reason, when you’re designing a recipe in Brewmaster you have to work out what cheeky name they’ve given the “same” hop.

This is effectively the Pro Evolution Soccer workaround, but for beer brewing.

After I worked out most of the recipe, it was time for a virtual brew day.

I carefully measure out the grains into my mash tun. I’m already heating water in my virtual kettle to get it up to 78 degrees. The idea here is that when I add that water to my grains it’ll come down to about 65 degrees.

Sure enough, I combine the water and grains in my mash tun and we’re brewing.

I can’t seem to spage in Brewmaster. This is a specific stage of my brewing process where you rinse your grains. Maybe it gets unlocked later, but it’s the first thing from my real-life brew day I can’t replicate.

After speeding up time using the in-game clock, it’s time to get my wort into a pot for the boil. It’s a quick job transferring. You can make transferring that bit quicker by using a pump. Some of the game physics are fun. One earlier transfer was slow because both vessels were beside each other on a table. Moving one to the floor got things going again.

The wort is now boiling and I’m adding in my “I can’t believe it’s not Nelson Sauvin” hops. Oddly, despite being able to add this to my recipe, I’m not able to find it in the brew store in the game.

The game is buggy from time to time. It’s crashed a few times. It’s annoying.

Despite the bugs and fake hops, I get through the hot side of my virtual brew day. Now it’s time to cool everything as quickly as possible.

Brewmaster is true to life for quick a bit of brewing. You get off flavours in your beer if you don’t cool your wort quickly enough post boil, or if you make a mistake somewhere. Nothing is overly negative in the game. Like, you can’t die or hit a “game over” screen, but you’ll be annoyed at yourself for silly mistakes.

I get my immersion chiller into the wort and get things chilled to 20 degrees. Then it’s a quick transfer into my fermenter followed by pitching yeast. It’s all following a normal brewday at this stage. Again, skipping time is one of the big advantages of brewing in a game like this versus the real world. The other is not having to clean anything – the worst part of making beer.

I’m disappointed to see no bubbler activity animation in Brewmaster. That moment, after 24 hours of watching your fermenter, to know there’s life, is magical. But it’s omitted from Brewmaster. That really surprised me given the attention to detail is quite incredible away from this.

Skipping over the 15 days of fermentation, it’s time to chuck in some sugar and add to a conditioning vessel. This is a big departure from my own setup. Basically, this is a kegging setup. Not something beginner brewers typically have. I had sugar to individual bottles, not the entire batch.

After skipping forward in time another 21 days, the beer is ready for tasting.

Skipping time and not cleaning up after you brew is amazing. But by far the worst thing about Brewmaster is that you can’t really taste your beer. But then again, can you really fly with Flight Simulator or enjoy anything but experience from a simulator?

Brewmaster tries to gamify beer brewing as best they can. They tie in a lot of real-world elements of being a home brewer. There are local brew competitions, the first of which one of my beers won I might add. You’ll also be invited to give your beer to local events. If that’s based on real-world events, there are countries out there with much looser licensing laws.

The quarterly edition of Brewers Quarterly has challenges and recipes for you to take on. As you do, the game will gauge how well you’ve brewed your beer. If you’ve made mistakes or not used certain techniques like chilling, you might get off flavours. And that’s where the fun of the game is.

How accurate the recipe simulator is, is hard to judge. But I use an amazing app called Brewfather to craft my own beer recipes. It’s incredible at estimating beer characteristics so it makes total sense that homebrewing has ended up here, in a simulator.

Above you’ll see the results of my virtual brewday and below you’ll find the real beer. The real beer came out with a higher ABV and was darker. Given I had to sub so many ingredients owing to those copyright things I mentioned, it’s not unlikely that the recipe changed somewhat.

Before I started brewing, I would have loved this. I actually went looking for a simulator to try and better understand the stages of brewing. Brewmaster is incredibly accurate in this sense. It’s a way of training your muscle memory to avoid silly mistakes on brewday.

The lifespan of the game is rather limited though. I’ll admit the creators have done really well with the gamification of brewing, but still, there’s only so much virtual brewing you can do before getting bored. Particularly when there’s no real beer at the end of it. Styling your brew area is a nice addition along with the competitions and challenges, but it’s still limited.

It’s a lot cheaper to get cracking with Brewmaster than it is real brewing, so if you’ve ever thought about getting into brewing as a hobby, this might just let you know if there’s too much work involved or not. It might be the perfect gift for the homebrewer in your life either. They’ll cause less of a mess brewing here anyway.

I bought this myself and reviewed it on Playstation 5.

How To Add ITV To Sky In Ireland For World Cup...